The new South Pole marker has been moved to its correct location for 2013. A new plaque on top honors Neil Armstrong and the dwarf planet Pluto.

The new 2013 South Pole marker has been revealed and set in place, and, along other things, the new brass-and-copper plaque that tops the marker gives a shout out to Neil Armstrong, first human to walk on the moon, and to the former planet Pluto.

The Amundsen-Scott South Pole Station sits on a moving sheet of ice more than two miles (3 kilometers) thick. Because the ice is moving, the site where the geographic marker for the South Pole is installed – along with a sign and American flag – drifts about 30 feet (9 meters) per year. That’s why, every year in early January, the site is re-surveyed and the marker is moved. This yearly move keeps the marker in close proximity to the point where lines of longitude meet at Earth’s actual geographic South Pole. 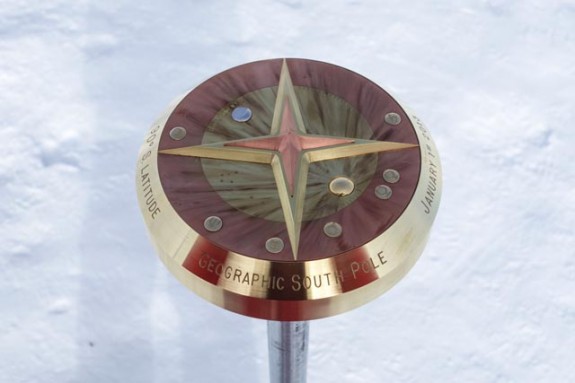 The 2013 South Pole marker shows the position of the planets as viewed from the Pole on January 1, 2013. 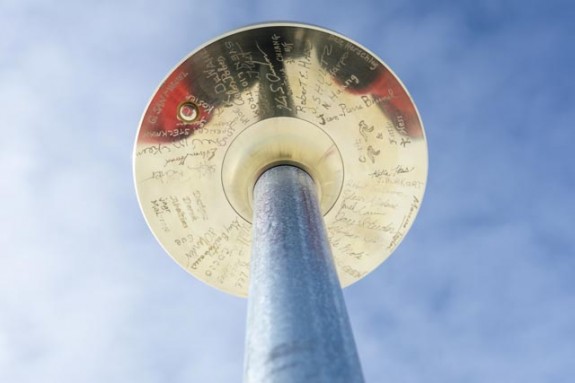 The underside of the new South Pole marker contains the signatures of those who wintered at South Pole Station in 2012. Plus there’s one more disc — to honor the dwarf planet Pluto. Image via The Antarctic Sun.

This year’s marker shows the position of the planets as viewed from the South Pole on January 1, 2013. There are seven brass planets displayed on a copper inlay. In the very center is a small copper star that marks the South Pole.

Science machinist Derek Aboltins, who wintered at the South Pole in the Antarctica winter of 2012 created the marker during the long winter months of June, July and August. He wrote in his description of the marker that it …

… represents the earth sciences done from here, as we reach out to understand our planet. The large brass star represents astronomy and astrophysics, as it extends out past our solar system in the quest for knowledge.

In the center of the marker (in brass) we have the sun, sunset and moon, with the Southern Cross, including the pointers. If you look carefully, the small inscription above the moon reads, ‘Accomplishment & Modesty.’ This was a reference to honor Neil Armstrong, as he passed away when I was making this section with the moon.

For those of you who still think Pluto should be a planet, you’ll find it included underneath, just to keep everyone happy. Bring back Pluto, I say!

The 2012 South Pole Station winter-overs also engraved their names on the underside of the geographic marker.

The entire South Pole Station staff gathered outside between the old and new pole locations this year and formed a semicircle. Each person helped pass the American flag from its drifted location to the new location just beside the 90 degrees South marker.

Earlier this month, the entire South Pole Station staff gathered outside between the old and new pole locations and formed a semicircle. Each person helped pass the American flag from its drifted location to the new location just beside the 90 degrees South marker. According to a report in The Antarctic Sun, almost all hands were present for the ceremony and the weather was sunny and a warm at just below minus 14 degrees Fahrenheit. Why not? It’s summer now at the South Pole.

Bottom line: The new South Pole marker has been moved to its correct location for 2013. A new plaque on top honors Neil Armstrong and the dwarf planet Pluto.