A mystery in the clouds

A peculiar ring in the clouds over Warwickshire, England this month sent the Cloud Appreciation Society’s Gavin Pretor-Pinney on a hunt for answers. 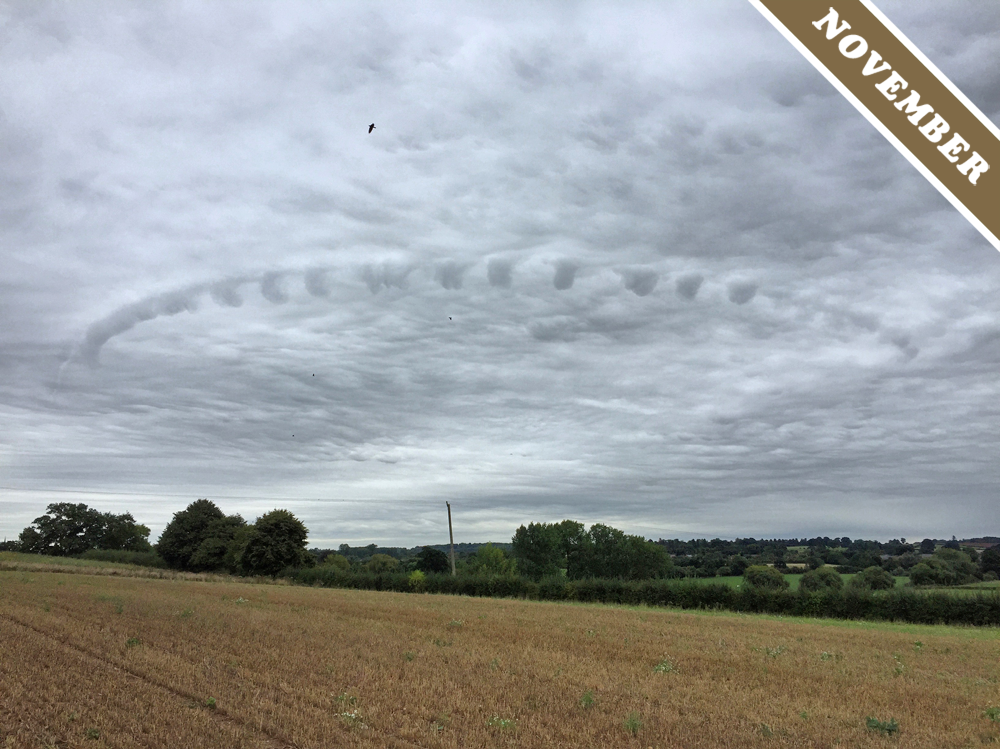 This mysterious cloud was the Cloud Appreciation Society’s Cloud of the Month for November 2016. Image taken over Hampton Lucy, Warwickshire, UK, by James Tromans. Via cloudappreciationsociety.org.

Re-printed with permission from Gavin Pretor-Pinney of the Cloud Appreciation Society.

Earlier this month, a peculiar ring appeared in the clouds over Warwickshire, England. James Tromans, who photographed the formation, asked what might have caused it. Clearly, this was time for some cloud detective work.

The ring was actually more of a curve, or a ‘U’, as there was no other half to it. It appeared to consist of regular lumps, or lobes, hanging down from the underside of a cloud layer. We wondered if this layer was an Altostratus, but off in the distance to the right of the image there appeared to be showers, like those produced by a storm cloud. This suggested that the cloud layer might in fact have been part of the huge canopy that spreads out at the top of a Cumulonimbus storm cloud. 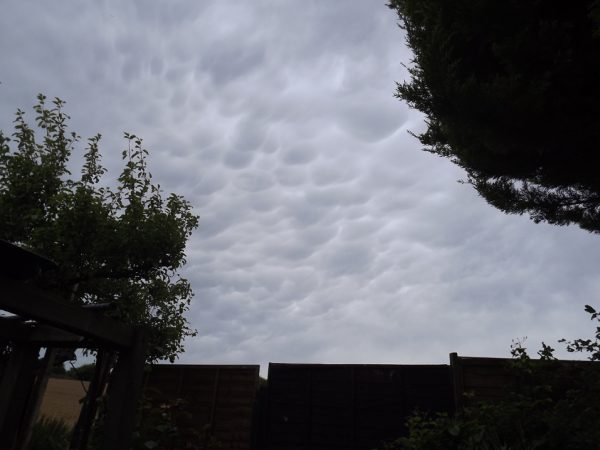 Could ‘mamma’ be involved? Spotted over Wilton, Wiltshire, UK, by William Saberton, via cloudappreciationsociety.org. Used with permission.

Sometimes, to the rear of a storm, lobes of cloud known as mamma can be seen hanging from the underside of the canopy (see image above). There certainly was a general appearance of mamma in the cloud layer. But could some of these mamma cloud lobes have arranged themselves into this strange, regular curved formation? It seemed unlikely.

There was something decidedly unnatural about the cloud’s appearance – as if it were man-made. Then it occurred to us that the photograph was looking towards Coventry Airport. Might this cloud effect have been in some way caused by an aircraft?

As planes fly through clouds made of ‘supercooled’ water droplets, they can encourage these extremely cold droplets to freeze and fall below, leaving behind a gap, known as a dissipation trail, or distrail. Such formations are often seen in straight lines where planes ascend or descend through the cloud. But they can also appear in circular shapes when one is flying in a holding pattern as it waits to land (see image below). 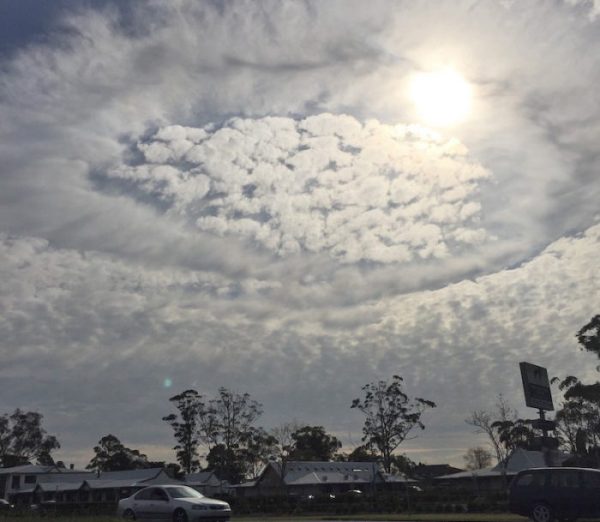 Or was it to do with an aircraft ‘distrail’, like this spotted over Newcastle, Australia, by Jillian De Martin? Image via cloudappreciationsociety.org. Used with permission.

James’s cloud wasn’t quite a distrail, but we felt we were getting close.
It was then that we recognised the regular spacing of the lobes. These sometimes appear below aircraft condensation trails (see image below). They are caused by the interaction between the two swirling vortices produced by the wings. As these rotate in opposite directions in the wake of an aircraft, the two turbulent flows interact and combine to form a periodic pattern of turbulent downdrafts. In the right conditions, they appear as lobes hanging below the condensation trail.

The clue was in the turbulence lobes that can appear hanging from an aircraft contrail. You can see these in this strip of contrail spotted over the Smokey Mountains, US, by Gary Smith. Image via cloudappreciationsociety.org. Used with permission.

This explained the formation. It was caused by an aircraft, which happened to be flying just above the base of the cloud layer as it turned in a holding pattern above the nearby airport. The plane’s condensation trail was hidden within the cloud layer, but the lobes of cloud descending below it, caused by the turbulence from its wings, appeared extending below the layer.

Phew! With that cleared up, we could finally relax once more.

Bottom line: Mysterious cloud, the Cloud Appreciation Society’s Cloud of the Month for November 2016. It turned out to have been caused by an aircraft.

Re-printed with permission from Gavin Pretor-Pinney of the Cloud Appreciation Society.