Using data on crop cover from USDA, researchers demonstrate that the rate of land use change to corn and soy is comparable to deforestation rates in Brazil and Indonesia in the 1980s.

Christopher Wright and Michael Wimberly of South Dakota State University published a study in the March 5, 2013 edition of the Proceedings of the National Academy of Sciences (PNAS), showing that grasslands in what is called the western corn belt of the United States are being increasingly converted to farm for corn and soybeans. The likely cause is the demand for biofuels, which has been driving the prices of these crops to an all-time high. Wright and Wimberly focused on the U.S. states of North Dakota, South Dakota, Nebraska, Minnesota and Iowa. By using newly available data on crop cover from the U.S. Department of Agriculture (USDA), they demonstrated that the rate of land use change to corn and soy has not been this high since the 1920s and 30s, and is comparable to deforestation rates in Brazil and Indonesia in the 1980s. 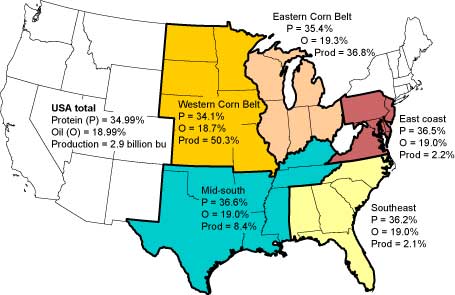 A study in the U.S. western corn belt suggests that land being converted to corn crops is threatening native ecosystems. More info on this map at AgBioForum.

Since most high-quality farmland is already being used to grow corn and soybeans, farmers wanting to take advantage of the corn/soy price boom caused by biofuel demand are converting poorer quality land that is at a high risk for erosion, and is more susceptible to drought. Grassland soils also store vast amounts of carbon, and disturbing these soils by farming them causes massive carbon flux to the atmosphere. Furthermore, many previously unfarmed grasslands are near wetlands, and agricultural runoff in the form of inefficiently used fertilizers can contaminate those ecosystems and harm waterfowl.

While Wright and Wimberly suggest corn and soy based biofuel demand is responsible for changing grasslands, they also acknowledge that different crops such as perennial grasses may be more beneficial for carbon savings and pollution reduction. However, since land use change has been so aggressive, a window of opportunity to move toward biofuel solutions other than corn could be closing.