A year ago, the equatorial Pacific was pulsing with heat, due to one of the most intense El Niños on record. But the current La Niña has been relatively quiet. 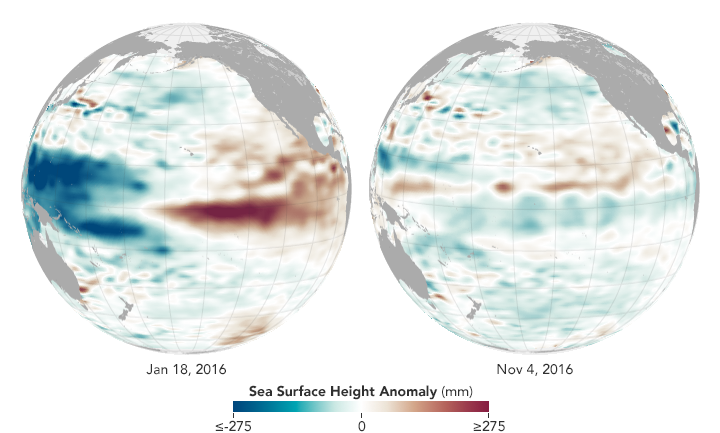 These maps compare sea surface height anomalies in the Pacific Ocean on November 4, 2016, near the peak of the current La Niña, and on January 18, 2016, near the peak of last winter’s El Niño, from NASA satellite data. Shades of red indicate areas where the ocean stood higher than the normal sea level. (Surface height is a good proxy for temperatures because warmer water expands to fill more volume.) Shades of blue show where sea level and temperatures were lower than average. Normal sea-level conditions appear in white. Image via NASA

The 2015-2016 El Nino was one of the most intense on record. But the current La Niña, the cool sister pattern to El Niño, has been relatively quiet. In a report issued in December 2016, the NOAA Climate Prediction Center described the latest La Niña as “weak” and likely changing to neutral conditions in early 2017.

El Niño and La Niña are periodic weather patterns resulting from interactions between the ocean and the atmosphere in the tropical Pacific Ocean. While El Niño knocks down trade winds and pushes warm water from the western Pacific to the Americas, La Niña pulls up cool water from the depths of the eastern Pacific, and pushes the warm water back toward Asia. That’s why regions that get drenched with rain and snow during El Niño often go dry during La Niña events, and vice versa, as atmospheric circulation and jet streams shift with the changing heat and moisture supply from the vast Pacific Ocean. The video below explains how El Niño and La Niña work.

La Niña conditions began to appear in July and August 2016. During last year’s El Niño, surface water temperatures were as much as 2.5° C above the 1981-2010 norm. During the current La Niña, temperatures have not dropped more than 1 degree below normal. Bill Patzert is a climatologist at NASA’s Jet Propulsion Laboratory. Patzert said in a statement:

Last year’s Niño was huge in area, duration, and magnitude. My take is that because it lasted so long and covered such a large area, it damped the return of strong trade winds needed for a healthy Niña. 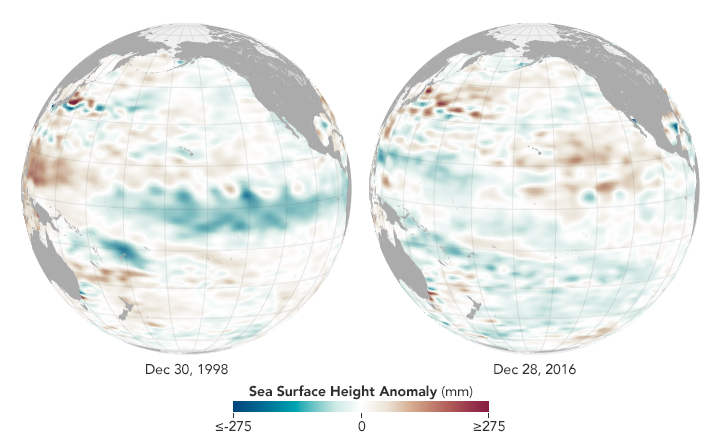 The maps above compare conditions in December 2016 with December 1998, one of the strongest La Niña events on record. Image via NASA

The patterns following the El Niño of 2015–16 have been starkly different from what occurred after the last major event. According to a statement at NASA’s Earth Observatory:

In 1997-98, very warm El Niño conditions persisted for roughly 13 months, but were then followed by roughly 32 months of well-below-normal (La Niña) water temperatures in the eastern Pacific. In 2015–2016, water temperatures and sea surface heights were above normal for 19 months, first weakly and then with great gusto in late 2015. But this event has been followed by just five months of weak La Niña conditions that are already fading.

According to Mike McPhaden of the NOAA Pacific Marine Environmental Laboratory:

Mike Halpert, deputy director of the NOAA Climate Prediction Center, noted that the current pattern is somewhat similar to 1982–83, when another strong El Niño was followed by a relatively modest La Niña. Halpert said:

Just when you think you have seen everything and think you know what to expect, something happens that you just can’t explain. There are many rhythms and natural variabilities, and nature will always keep it interesting.

Bottom line: Although the 2015-2016 El Nino was one of the most intense on record, the current La Niña has been relatively quiet.