Monitoring our water use from space with pinpoint accuracy, even at the scale of individual fields.

Martha Anderson, a research scientist at the U.S. Department of Agriculture, uses images from the Landsat satellite program to monitor water use and drought on U.S. farms with pinpoint accuracy, even at the scale of individual fields. As water availability becomes an increasingly critical issue worldwide, she said, it’s important to be able to monitor how much water is evaporated, how much is used, and where it is used. She spoke about monitoring our water use from space with EarthSky’s Jorge Salazar.

In agricultural landscapes, evapotranspiration, or ET as we call it for short, represents the total amount of water that’s used in the process of growing crops.

We need to be able to monitor ET because it’s a really crucial part of the global water cycle. It’s the difference between rainfall – which is the water that is put into the land surface system – and the evaporative loss from the land surface. The process of ET lets us know how much water is left behind to do things like grow crops or provide drinking water or feed the regional streams and river systems. 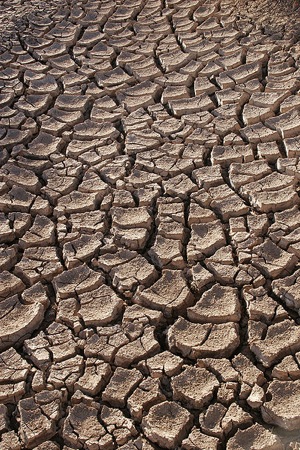 So, if we can map ET accurately over large regions we can estimate soil moisture availability and how much water is being used for different purposes – for example agriculture and urban uses. We know that fresh water is becoming increasingly scarce worldwide. It’s going to become increasingly important that we be able to monitor this component of the water budget very accurately.

How does Landsat in space see how water is being used on an agricultural field?

Landsat has a number of imaging systems, and one of them collects radiation that is in the thermal waveband. Those are wavelengths that are longer than our eyes can see. All objects emit this kind of thermal radiation – the hotter the object, the stronger the thermal emission. Using these thermal waveband systems we can map out the temperature of the land surface remotely. With Landsat we can do this mapping at fine enough spatial resolution that we can detect temperature differences between different agricultural fields, and this is very useful.

Crops that are evaporating water with a very high rate of ET tend to be cooler because the evaporation is cooling down the surface. But as the crops become stressed the transpiration shuts down, the canopy starts to heat up, and we can detect those elevated leaf temperatures from space. So, with Landsat we can detect that a given field is maybe not as healthy as it should be.

How is the water use information that Landsat collects being used?

Landsat ET is being used operationally now – particularly in the western states, where water resources are getting increasingly tight and being depleted often at an unsustainable rate.

In Idaho, for example, water resource managers and water management districts are using Landsat ET to see if individual irrigators within irrigation districts are complying with their allocated water rights or if they’re using more water than they should be. They can determine this by looking at time sequences of the Landsat ET data.

Because we have a Landsat image archive extending back to the early 1980’s, we can make a time sequence of maps showing how water has been used historically over a landscape. That’s really critical information for negotiating water rights trades and interstate water compacts for example.

We can also study the trade-offs in water use between different users. For example, in some parts of the West you have irrigation occurring next to a stream that’s supporting important habitat – salmon spawning grounds, for example. We can use the Landsat ET to see how much the irrigated agriculture may be influencing the stream flow in these critical ecosystems.

You’ve recently published work on how evaporation and transpiration by plants can be used to better understand drought using Landsat data. What did you find?

We know that when an area is experiencing drought, its ET is going to be necessarily lower. The soil is dry, there’s less water there available for the plants to use. These ET maps make excellent drought maps as well. You don’t need any ground-based rainfall data to make these maps because the drought signal is being conveyed by the thermal land surface temperature signal.

So, this is a really good way to map drought in countries that may not have the dense meteorological infrastructure that we have here in the U.S. – sparer rain gauges and Doppler radar systems. For example, in the Horn of Africa where they’re currently experiencing severe famine we’ve been able to apply these thermal techniques and make some very nice maps pinpointing the drought-affected regions.

The information from Landsat is freely available to anyone, right?

That’s right. And that’s a change that occurred just over the last couple of years. A new paradigm was developed – let’s distribute these images for free. It’s incredibly valuable information. People from the U.S., from other countries can access this imagery now free of charge.