Steaming fissures in the Kilauea volcano first began to crack open and spread lava across Hawaii’s Leilani Estates neighborhood on May 3, 2018. Since then, more than 20 fissures have opened on the Kilauea’s Lower East Rift Zone, though most of the lava flows have been small and short-lived.

Not so for Fissure 8. That crack in the Earth has been regularly generating large fountains of lava that soar tens to hundreds of feet into the air. It has produced a large, channelized lava flow that has acted like a river, eating through the landscape as it flows toward the sea. 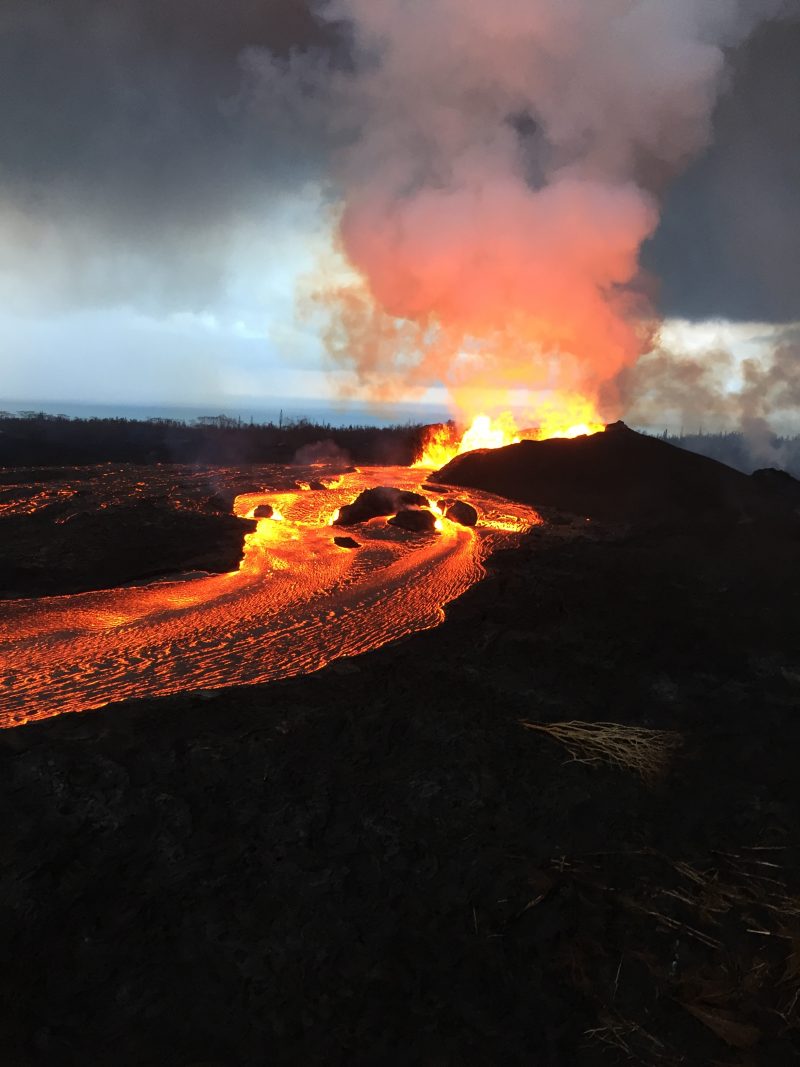 Photo shows Fissure 8 of Kilauea volcano in Hawaii. Fissure 8 fountains reached heights up to 160 feet overnight on Friday. The USGS Hawaiian Volcano Observatory reports that fragments falling from the fountains are building a cinder-and-spatter cone around the vent. USGS image taken June 12, 2018, around 6:10 a.m. HST. View the latest images and videos via USGS.

While the Fissure 8 lava flow initially remained in relatively narrow channels, it began to widen significantly as it neared the coastline and passed over flatter land. It evaporated Hawaii’s largest lake in a matter of hours, and devastated the communities of Vacationland and Kapoho, destroying hundreds of homes. 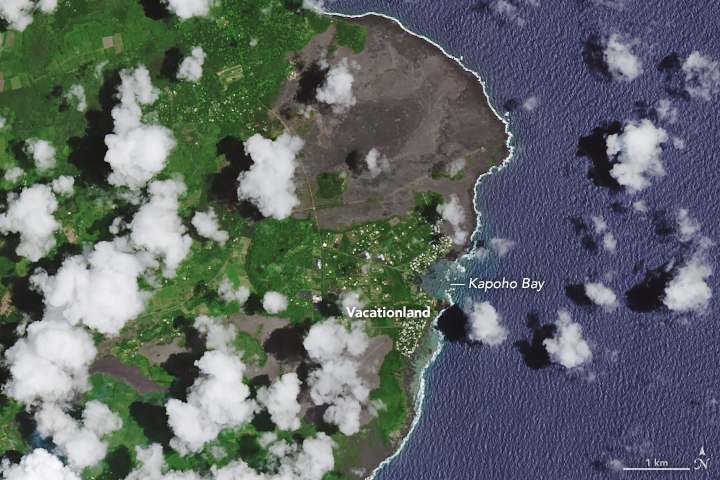 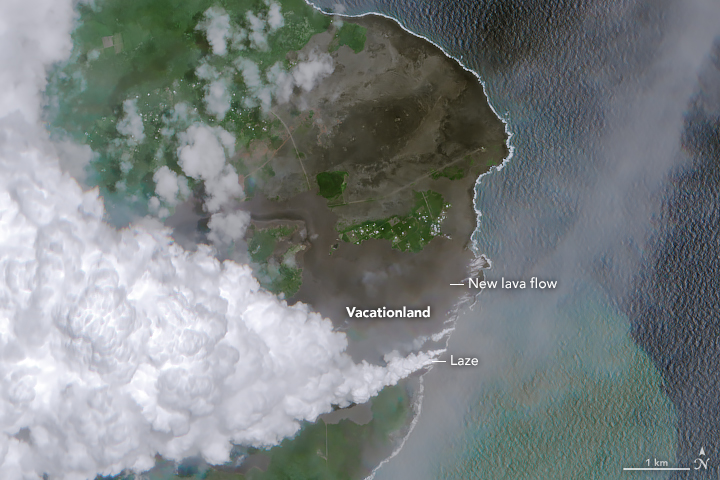 On June 3, 2018, lava from Fissure 8 reached the ocean at Kapoho Bay on Hawaii’s southeast coast. When the Multi-Spectral Instrument (MSI) on the European Space Agency’s Sentinel-2 satellite captured a natural-color image on June 7 (top image, above), the lava had completely filled in the bay and formed a new lava delta.

For comparison, the Landsat 8 image shows the coastline on May 14 (lower image, above). 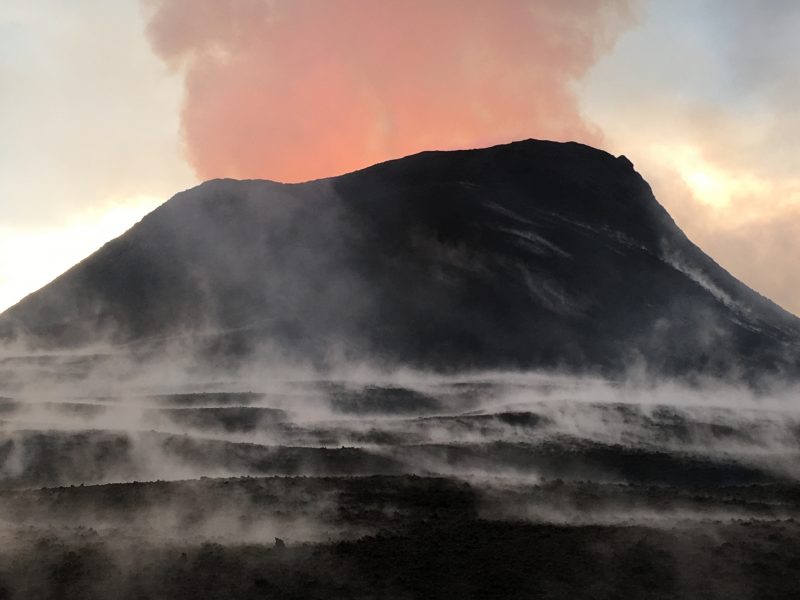 June 15, 2018, photo of Fissure 8. This fissure has produced a lava fountain pulsing to heights of 185 to 200 feet (55 to 60 meters). Spattering has built a cinder cone that partially encircles Fissure 8, now 170 feet (51 meters) tall at its highest point. The steam in the foreground is the result of heavy morning rain falling on warm (not hot) tephra (lava fragments). View the latest images and videos via USGS.

Since May 3, 2018, Kilauea has erupted more than 110 million cubic meters of lava. That is enough to fill 45,000 Olympic-sized swimming pools, cover Manhattan Island to a depth of 7 feet (2 meters), or fill 11 million dump trucks, according to estimates from the U.S. Geological Survey (USGS). However, that is only about half of the volume erupted at nearby Mauna Loa in a major eruption in 1984.

The new land at Kapoho Bay is quite dynamic, fragile, and dangerous. USGS warns:

Venturing too close to an ocean entry on land or the ocean exposes you to flying debris from sudden explosive interaction between lava and water.

Since lava deltas are built on unconsolidated fragments and sand, the loose material can abruptly collapse or quickly erode in the surf. 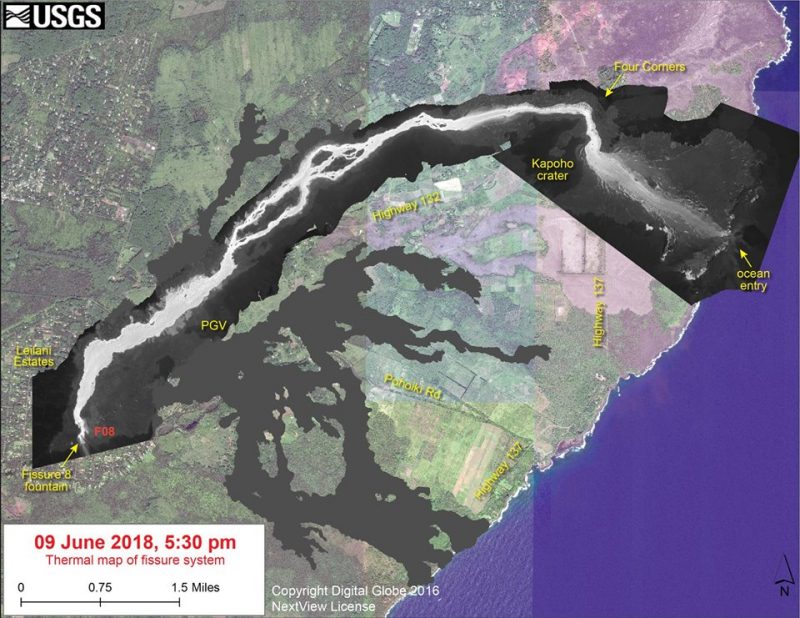 This thermal map shows the fissure system and lava flows as of 5:30 p.m. on Saturday, June 9, 2018. The flow from fissure 8 remains active, with the flow entering the ocean at Kapoho. The black and white area is the extent of the thermal map. Temperature in the thermal image is displayed as gray-scale values, with the brightest pixels indicating the hottest areas. Image via USGS.

The plumes that form where lava meets seawater are also hazardous. Sometimes called laze, these white plumes of hydrochloric acid gas, steam, and tiny shards of volcanic glass can cause skin and eye irritation and breathing difficulties. 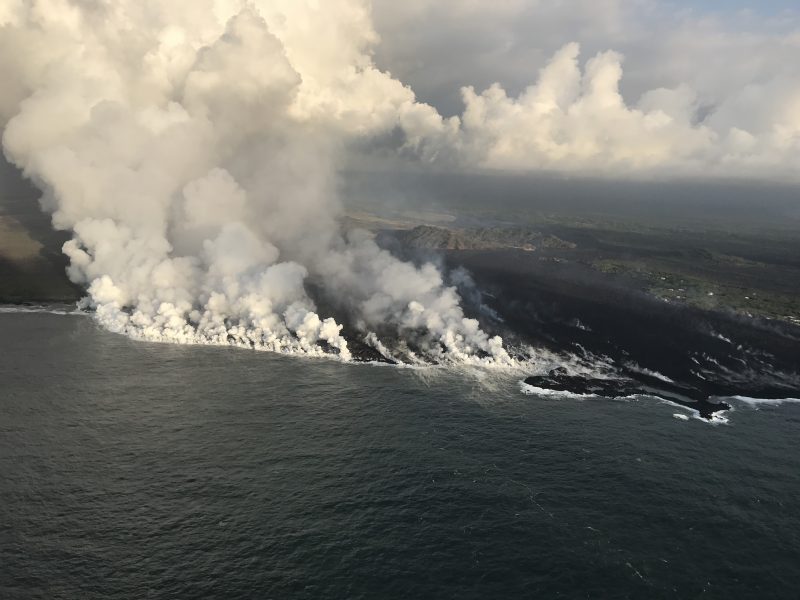 Bottom line: The Hawaiian Kilauea volcano’s Fissure 8 has produced a large, channelized lava flow that has now flowed to the sea.