Is the pronoun ‘I’ becoming obsolete?

Thinking of plants and animals – including humans – as independent individuals might be an oversimplification, according to modern thinking in microbiology. 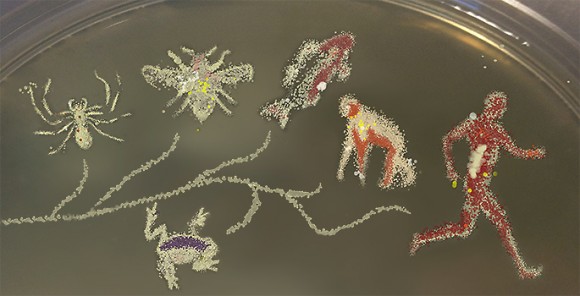 Recent microbiological research suggests that what we’ve always thought of as individuals are instead “biomolecular networks” that consist of visible hosts plus millions of invisible microbes. These microbes have a significant effect on how the host develops, the diseases it catches, how it behaves and possibly even its social interactions. That’s according an article by scientists from Vanderbilt University and University of Michigan in the August 18 edition of PLOS Biology.

Seth Bordenstein is associate professor of biological sciences at Vanderbilt University. He said:

It’s a case of the whole being greater than the sum of its parts.

In this case, the parts are the host and its genome plus the thousands of different species of bacteria living in or on the host, along with all their genomes, collectively known as the microbiome.

The host is something like the tip of the iceberg, the researchers say, while the bacteria are like the part of the iceberg that is underwater. Nine out of every 10 cells in plant and animal bodies are bacterial. But bacterial cells are so much smaller than host cells that they have generally gone unnoticed.

Microbiologists have coined new terms for these collective entities – holobiont – and for their genomes – hologenome. Bordenstein said:

These terms are needed to define the assemblage of organisms that makes up the so-called individual.

The authors say that evolutionary forces such as natural selection and drift may act on the hologenome not just on the genome. So mutations in the microbiome that affect the fitness of a holobiont are just as important as mutations in the host’s genome. However, they argue that this does not change the basic rules of evolution but simply upgrades the types of biological units that the rules may act upon.

Although it does not change the basic rules of evolution, holobionts do have a way to respond to environmental challenges that is not available to individual organisms: They can alter the composition of their bacterial communities. For example, if a holobiont is attacked by a pathogen that the host cannot defend against, another symbiont may fulfill the job by manufacturing a toxin that can kill the invader. In this light, the microbes are as much part of the holobiont immune system as the host immune genes themselves.

According to Bordenstein, these ideas are gaining acceptance in the microbiology community. However, adoption of these ideas has been slower in other fields. He said:

Currently, the field of biology has reached an inflection point. The silos of microbiology, zoology and botany are breaking down and we hope that this framework will help further unify these fields.

Not only will this powerful holistic approach affect the basic biological sciences, Bordenstein said, but it also is likely to impact the practice of personalized medicine as well.

Take the missing heritability problem, for example. Although genome-wide studies have provided valuable insights into the genetic basis of a number of simple diseases, they have only found a small portion of the genetic causes of a number of more complex conditions such as autoimmune and metabolic diseases. These may in part be “missing” because the genetic factors that cause them are in the microbiome, Bordenstein pointed out. He said:

Instead of being so ‘germophobic,’ we need to accept the fact that we live in and benefit from a microbial world. We are as much an environment for microbes as microbes are for us.

Bottom line: According to an August 18, 2015 paperin the August 18 journal PLOS Biology, recent microbiological research suggests that thinking of plants and animals, including humans, as autonomous individuals might be an over-simplification.