Another intense summer of fires in Siberia

Following an active 2019 season, fires in Siberia in 2020 have again been abundant and widespread, and have produced abnormally large carbon emissions.

The area shown in this time-lapse sequence includes the Sakha Republic, one of the most active fire regions in Siberia this summer. The NASA satellite image shows smoke plumes billowing from July 30 to August 6, 2020. Image via NASA.

Strong winds occasionally carried the plumes as far as Alaska in late July. As of August 6, approximately 19 fires were burning in the Sakha Republic (shown in the image above), one of the most active fire regions in Siberia in summer 2020. 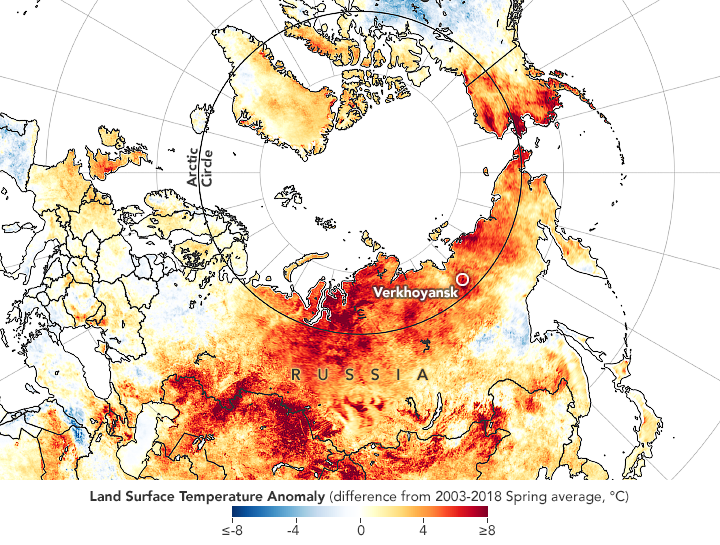 This map shows land surface temperature anomalies from March 19 to June 20, 2020. Red colors depict areas that were hotter than average for the same period from 2003-2018; blues were colder than average. The map is based on NASA satellite data. Image via NASA.

Mark Parrington is a senior scientist at the Copernicus Atmosphere Monitoring Service (CAMS) of the European Centre for Medium-Range Weather Forecasts. He said:

After the Arctic fires in 2019, the activity in 2020 was not so surprising through June. What has been surprising is the rapid increase in the scale and intensity of the fires through July, largely driven by a large cluster of active fires in the northern Sakha Republic.

Estimates show that around half of the fires in Arctic Russia this year are burning through areas with peat soil, decomposed organic matter that is a large natural carbon source. Warm temperatures (such as the record-breaking heatwave in June) can thaw and dry frozen peatlands, making them highly flammable. Peat fires can burn longer than forest fires and release vast amounts of carbon into the atmosphere

Parrington noted that fires in Arctic Russia released more carbon dioxide (CO2) in June and July 2020 alone than in any complete fire season since 2003 (when data collection began).

The destruction of peat by fire is troubling for so many reasons. As the fires burn off the top layers of peat, the permafrost depth may deepen, further oxidizing the underlying peat.

Peteet and colleagues recently reported that the amount of carbon stored in northern peatlands is double the previous estimates.

Fires in these regions are not just releasing recent surface peat carbon, but stores that have taken 15,000 years to accumulate, said Peteet. They also release methane, which is a more potent greenhouse gas than carbon dioxide. Peteet said:

If fire seasons continue to increase in severity, and possibly in seasonal extent, more peatlands will burn. This source of more carbon dioxide and methane to our atmosphere increases the greenhouse gas problem for us, making the planet even warmer.

Bottom line: Fires in Siberia in summer 2020 have been abundant and widespread, and have produced abnormally large carbon emissions.