A 2016 study suggested tall ice cliffs along Antarctica’s coast might collapse rapidly under their own weight and contribute to more than 6 feet of sea-level rise by 2100. Now, MIT researchers have found this prediction may be overestimated. 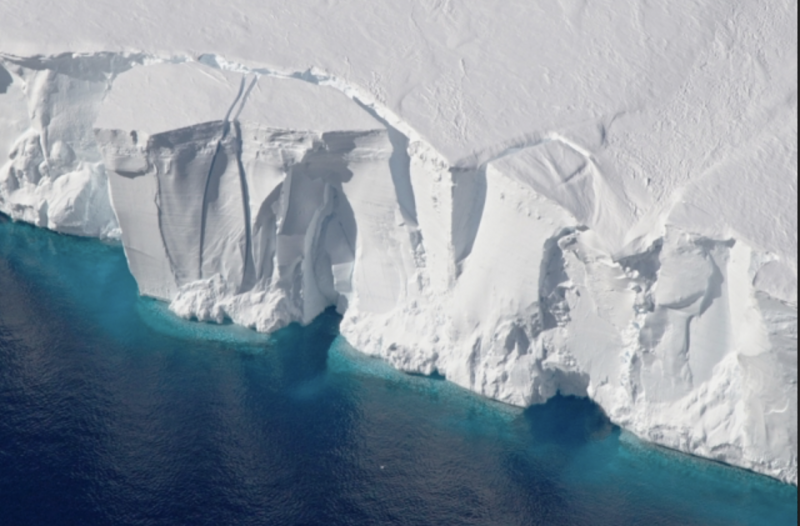 Researchers at the Massachusetts Institute of Technology (MIT) in Cambridge weighed in this month on the potential of ice cliffs in Antarctica to collapse suddenly due to Earth warming, and thereby contribute to extreme sea level rise by the end of this century. This subject – called marine ice cliff instability by scientists – was first proposed in the 1970s but entered a new period of scientific scrutiny when a 2016 study in the peer-reviewed journal Nature suggested the fast collapse of tall Antarctic ice cliffs might cause 6 feet (2 meters) of sea-level rise by the end of this century:

… enough to completely flood Boston and other coastal cities.

Since that 2016 study, scientists have been looking hard at the hypothesis that giant blocks falling into the Southern Ocean surrounding Antarctica, from crumbling ice cliffs at the coast, would create a kind of domino effect, exposing more ice cliffs that would, in turn, crumble. If this did happen, sea level would rise rapidly. But will it happen? No one knows, of course, but scientists have been turning their best tools toward the question. A February 2019 statistical study, also in Nature, suggested a rapid collapse of Antarctic ice cliffs was unlikely to have happened in the past, even during some of Earth’s warmest episodes over the last 3 million years. The new MIT study published October 21, 2019, reaches its conclusions in a different way, but also suggests the earlier estimate of 6 feet (2 meters) of sea level rise by 2100 may have been too high.

In the new study, the effect of collapsing ice cliffs to contribute to rapid sea level rise is shown to depend heavily on how fast the cliffs themselves collapse. A relatively slow collapse would, in these scientists’ words: 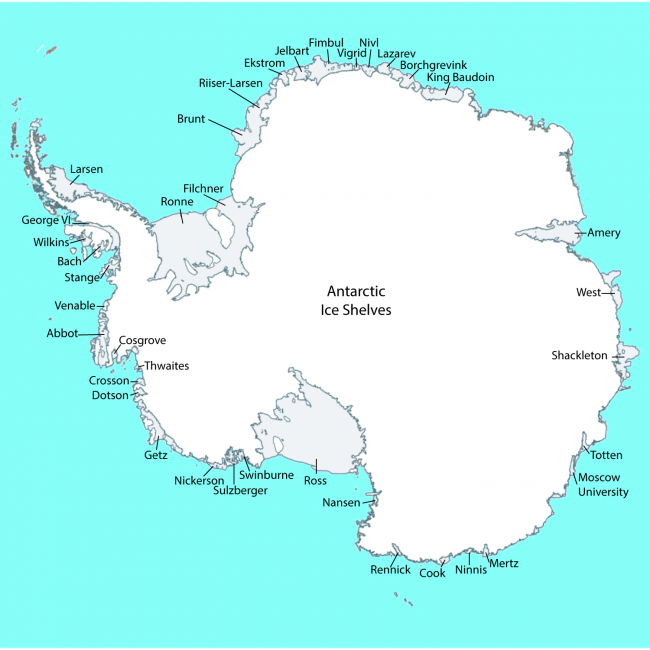 View larger. | Ice shelves in Antarctica. These are places where tall ice cliffs calve icebergs into the Southern Ocean that completely surrounds the continent. Image via Wikipedia.

You probably know that Antarctica is a true land continent, in contrast to the Arctic, whose only solid surface is floating sea ice. As MIT explained in a statement:

Antarctica’s ice sheet spans close to twice the area of the contiguous United States, and its land boundary is buttressed by massive, floating ice shelves extending hundreds of miles out over the frigid waters of the Southern Ocean. When these ice shelves collapse into the ocean, they expose towering cliffs of ice along Antarctica’s edge.

Scientists have assumed that ice cliffs taller than 90 meters (about 300 feet, or the height of the Statue of Liberty) would rapidly collapse under their own weight, contributing to more than 6 feet of sea-level rise by the end of the century — enough to completely flood Boston and other coastal cities. But now MIT researchers have found that this particular prediction may be overestimated.

In a paper published … in Geophysical Research Letters, the team reports that in order for a 90-meter ice cliff to collapse entirely, the ice shelves supporting the cliff would have to break apart extremely quickly, within a matter of hours — a rate of ice loss that has not been observed in the modern record.

Ice shelves are about a kilometer (0.6 miles) thick, and some are the size of Texas. To get into catastrophic failures of really tall ice cliffs, you would have to remove these ice shelves within hours, which seems unlikely no matter what the climate-change scenario. 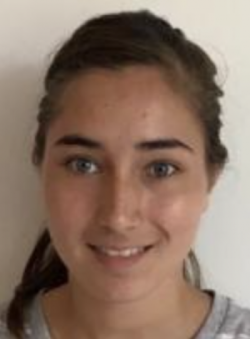 Fiona Clerc is a graduate study in MIT’s Department of Earth, Atmospheric and Planetary Sciences. She’s 1st author on the new study about collapsing ice cliffs in Antarctica. Image via MIT.

If a supporting ice shelf were to melt away over a longer period of days or weeks, rather than hours, the researchers found that the remaining ice cliff wouldn’t suddenly crack and collapse under its own weight, but instead would slowly flow out, like a mountain of cold honey that’s been released from a dam.

Brent Minchew of MIT – one of the new study’s co-authors – said:

The current worst-case scenario of sea-level rise from Antarctica is based on the idea that cliffs higher than 90 meters would fail catastrophically. We’re saying that scenario, based on cliff failure, is probably not going to play out. That’s something of a silver lining.

That said, we have to be careful about breathing a sigh of relief. There are plenty of other ways to get rapid sea-level rise.

Here’s how these scientists reached their conclusion. MIT explained:

Today, there are no ice cliffs on Earth that are taller than 90 meters, and scientists assumed this is because cliffs any taller than that would be unable to support their own weight.

Clerc, Minchew, and Behn took on this assumption, wondering whether and under what conditions ice cliffs 90 meters and taller would physically collapse. To answer this, they developed a simple simulation of a rectangular block of ice to represent an idealized ice sheet (ice over land) supported initially by an equally tall ice shelf (ice over water). They ran the simulation forward by shrinking the ice shelf at different rates and seeing how the exposed ice cliff responds over time.

In their simulation, they set the mechanical properties, or behavior of ice, according to Maxwell’s model for viscoelasticity, which describes the way a material can transition from an elastic, rubbery response, to a viscous, honey-like behavior depending on whether it is quickly or slowly loaded. A classic example of viscoelasticity is silly putty: If you leave a ball of silly putty on a table, it slowly slumps into a puddle, like a viscous liquid; if you quickly pull it apart, it tears like an elastic solid.

As it turns out, ice is also a viscoelastic material, and the researchers incorporated Maxwell viscoelasticity into their simulation. They varied the rate at which the buttressing ice shelf was removed, and predicted whether the ice cliff would fracture and collapse like an elastic material or flow like a viscous liquid.

They model the effects of various starting heights, or thicknesses of ice, from 0 to 1,000 meters, along with various timescales of ice shelf collapse. In the end, they found that when a 90-meter cliff is exposed, it will quickly collapse in brittle chunks only if the supporting ice shelf has been removed quickly, over a period of hours. In fact, they found that this behavior holds true for cliffs as tall as 500 meters (1,640 feet). If ice shelves are removed over longer periods of days or weeks, ice cliffs as tall as 500 meters will not collapse under their own weight, but instead will slowly slough away, like cold honey.

The results suggest that the Earth’s tallest ice cliffs are unlikely to collapse catastrophically and trigger a runaway ice sheet retreat. That’s because the fastest rate at which ice shelves are disappearing, at least as documented in the modern record, is on the order of weeks, not hours, as scientists observed in 2002, when they captured satellite imagery of the collapse of the Larsen B ice shelf — a chunk of ice as large as Rhode Island that broke away from Antarctica, shattering into thousands of icebergs over the span of two weeks.

When Larsen B collapsed, that was quite an extreme event that occurred over two weeks, and that is a tiny ice shelf compared to the ones that we would be particularly worried about. So our work shows that cliff failure is probably not the mechanism by which we would get a lot of sea level rise in the near future. 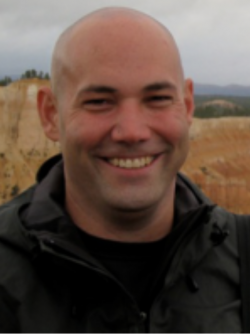 Brent Minchew leads MIT’s Glacier Dynamics and Remote Sensing Group, which studies the interactions between the climate, the cryosphere, and the solid Earth. Image via MIT.

That said, scientists do know sea level is rising. Between 1900 and 2016, it rose by about 6 to 8 inches (16-21 cm), according to a 2017 study by the U.S. Global Change Research Program. More precise data gathered from satellite radar measurements revealed an accelerating rise of about 3 inches (7.5 cm) from 1993 to 2017, according to data presented by the World Climate Research Program. Those last numbers indicate a trend of roughly one foot (30 cm) of sea level rise per century. So there’s a baseline for you. We might expect about a foot of sea level rise in this century, according to the most conservative estimates. But of course the rate of sea level rise is increasing. Ice is melting faster, and sea water itself is expanding via thermal expansion, as climate warms.

So if someone tells you, for example, that they know how much sea level will rise between now and 2100 … don’t believe them. No one knows. These studies are an attempt to place a net of human knowledge atop a highly complex natural system (the climate system). Scientists do their best, continually cross-checking each other. If we didn’t have science, what would we have instead? Without scientists’ struggle to understand Earth’s changing climate and its effects, we’d truly be at sea.

Bottom line: New research suggests that Antarctic ice shelf collapse might not lead to as rapid a rise in sea level as predicted, in the 21st century.

Source (2016 study in Nature): Contribution of Antarctica to past and future sea-level rise