Northwestern Florida was thought to get hit by a hurricane with a five-meter (16-foot) storm surge every 400 years. In fact, the frequency may be every 40 years. 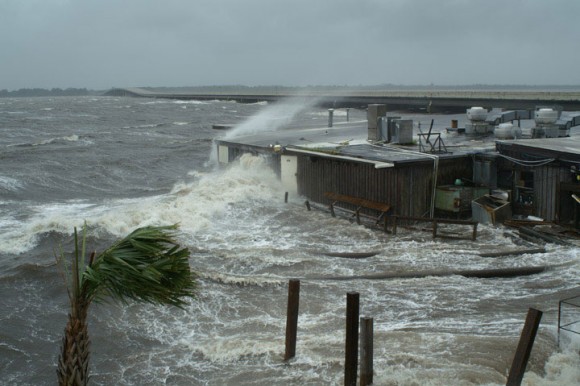 Storm surge from Hurricane Dennis on July 10, 2005, near Panacea, Florida. Photo via USGS

The National Hurricane Center points out that the greatest threat to life and property from a hurricane is often storm surge:

Hurricane Katrina (2005) is a prime example of the damage and devastation that can be caused by surge. At least 1,500 persons lost their lives during Katrina and many of those deaths occurred directly, or indirectly, as a result of storm surge.

Today (September 23, 2014), the American Geophysical Union released a study suggesting that the history of storm surge in the U.S. state of Florida has been strongly underestimated. They say the observational hurricane record for northwestern Florida is just 160 years long, yet hurricane activity is known to vary strongly over thousands of years. Digging back into the prehistorical hurricane record, Lin et al. find that scientists’ reliance on such a narrow slice of observations has led them to underestimate the frequency with which large hurricanes have slammed into Florida’s Gulf Coast.

Based on historical records, northwestern Florida gets hit by a hurricane packing a five-meter (16-foot) storm surge every 400 years. Incorporating long-term paleohurricane records, the authors find that the frequency of such a storm is actually closer to every 40 years.

When strong storms batter the shore, waves can carry sediment far inland. Digging down into the sediment record, researchers can reproduce the occurrence of past storm surge. Using a hurricane model and storm surge sediment observations, the authors calculated the intensity and frequency of past hurricanes in Florida’s Apalachee Bay. They find that while the frequency of hurricanes hitting the Gulf Coast has remained relatively the same over the past few thousand years, the storms’ average intensities have been, at times, much higher than during the past 160 years.

The authors suggest that assessments of hurricane risk in other coastal regions may also be biased by relatively short observational records, though the direction and magnitude of that bias is not obvious.

Bottom line: Historical records suggest northwestern Florida gets hit by a hurricane packing a five-meter (16-foot) storm surge every 400 years. These scientists find the frequency of such a storm is actually closer to every 40 years.