Chris Zahm: Understanding and probing the world below our feet

Necessary resources such as oil and water lie below our feet. How today’s scientists are coming to understand the world underground, while exploring for resources in safe, practical and effective ways.

Many of the essentials of our daily life – from the fuel we put in our cars to the water we drink – come from underneath the Earth’s surface. Our ability to find and effectively use these resources is based on how well geologists and other experts come to understand Earth’s systems below our feet. Research scientist Chris Zahm of the Bureau of Economic Geology uses the newest technologies to study outcrops, or exposures of rock, on Earth’s surface. His work helps reveal how fluids – such as oil and water – are moving underground. Zahm spoke with EarthSky about how technological applications such as LIDaR (LIght Detection and Ranging or Laser Imaging Detection and Ranging), UAVs (unmanned aerial vehicles) or drones are revolutionizing scientists’ ability to understand the world underground, while exploring for natural resources in ways that are safe, practical and effective. 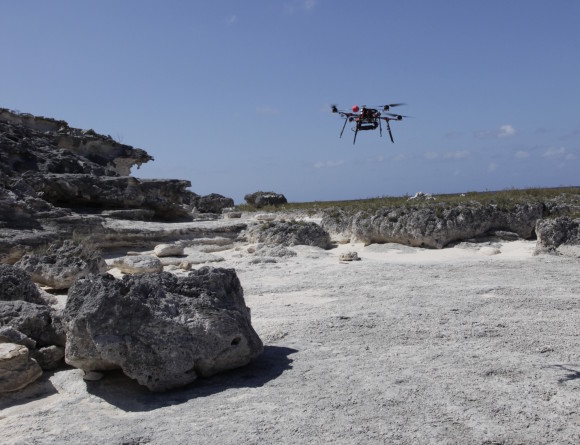 UAV hovering over exposed Pleistocene reef on West Caicos Island in the Antilles prior to climbing to acquisition height (50 m above outcrop). The UAV is manually launched and then controlled by a combination of manual and automated radio signals. Photo by Chris Zahm.

You study outcrops on Earth’s surface. Why are they important to geologists?

Outcrop exposures often provide the most revealing of all geologic data that we use to learn about what’s underground. They provide a glimpse into the spatial relationships between key phenomena underground. So if we understand them, it allows for improved characterization and extraction of many of the world’s key needs – for example, groundwater, metal resources and hydrocarbons [such as in crude oil].

Geologists are often tasked with making predictions of what will be encountered as we probe Earth’s subsurface. How do we know what’s under there?

We investigate the subsurface by drilling well bores for extracting things – for example, hydrocarbons or water. Or we might inject things, for example CO2, underground. However, these nearly one-dimensional samples are very limited. If you’re hoping to extract resources for human needs in a particular place, you really want to know more about what’s under the ground in that area in three dimensions. 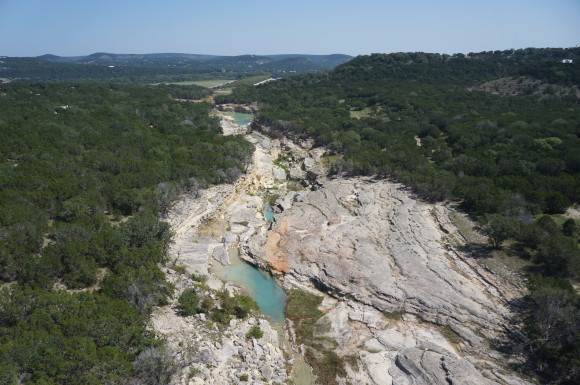 Oblique view into Canyon Lake Gorge near San Antonio, Texas. This view highlights the outcrop exposure of the Hidden Valley Fault and demonstrates the benefit of an elevated perspective. Photo by Robert Youens, CameraWings for BEG-RCRL research group.

Can you give us an example of why well bores supply only a limited view?

Sure. A typical oil field might be contained within a volume of Earth that is 150 billion cubic meters. That’s 5 kilometers wide by 10 kilometers long by 3 kilometers thick (the area of a neighborhood and three times deeper than the Grand Canyon). While drilling a well, we might collect rock core in 5-10% of the wells over a limited thickness. An oil field that has five cores that average 50 meters in length and 10 centimeters in diameter might be typical.

In this case, the cores that are collected would represent about three one-millionths of the total volume to be characterized. From this fraction of the data, geologists are called on to determine the features of the rocks that will have the greatest impact on our ability to extract or inject in the subsurface.

That’s where outcropping rock exposures can be so helpful. They are the key analog for predicting what changes can be expected underground. Outcrop exposures let geologists map and characterize subsurface variability in tremendous detail. They provide insight to critical spatial relationships between key elements. Why? Because the outcrop are analogs for making predictions in similar rocks in the subsurface. This type of analogy is also being used by Mars rovers, by the way, to determine if the features photographed on Mars are consistent with geologic features on earth.

In short, geologists would be severely limited in their predictive abilities of the subsurface if outcrops were not studied in detail.

Tell us about these new tools. Why do we need them?

Some of the earliest geologists recognized the advantage of flying in airplanes to gain a more elevated perspective of geologic features. This is still one of the main advantages of aerial or UAV technology.

Geologists have to constantly calibrate their own scale and sense of spatial relationships between geologic objects. High-resolution photography and LIDaR both provide passive techniques for capturing the spatial arrangement of key geologic features.

Furthermore, scientists have learned to utilize active remote sensing techniques such as hyperspectral photography to determine the elemental composition of outcrop exposures, further aiding in detailed mapping of the outcrop exposures. 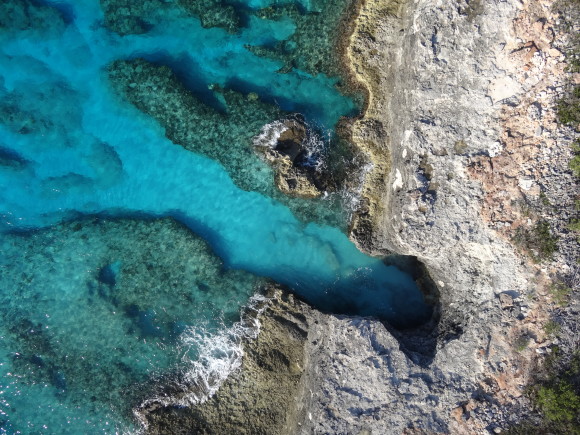 Vertical down-looking view from UAV which is 50-m overhead of the West Caicos shoreline.This perspective is unique for the shoreline detail and the detail imaged in the underwater bathymetry illustrating the effects of fracture develop in the reef and creation of an underwater groove. Photo by Robert Youens, CameraWings for BEG-RCRL research group.

These technologies also unlock previously uncharacterized areas that were unsafe or impossible to view properly.

For example, we recently had students mapping a karst feature that was in the side of a 1,200-foot (365-meter) cliff in Montana. Using LIDaR and high-resolution photography we developed one of the most comprehensive models of this particular karst feature that spanned over 30 miles (50 kilometers) of exposed geology.

When people hear the word drone they often think of weapons. How are drones being used to understand and probe for underground resources?

Drones – more commonly referred to as UAVs – are being used in so many ways that is it difficult to make a generic statement. The USGS has a National Unmanned Aircraft Systems office and lists usages such as forest health conditions, monitoring wildfires, earthquake zones, volcanoes, snow melt, invasive species, etc.

Our research group has been utilizing drones for capturing high-resolution photographs that are used for detailed mapping of large, nearly flat exposures (sometimes called pavements by geologists), to capture photographs from a vantage point that is physically impossible, or to speed up the capture of photographs in remote locations.

Our current projects include detailed mapping of a Pleistocene carbonate reef exposed along a 4.5-kilometer long shoreline in the Turks and Caicos Islands [ed.note: generally between the Bahamas and Haiti]. Using the photographs, we can characterize the geology with a much higher resolution map than previous scientists which relied on low-resolution survey maps.

In addition, the vertical view provided by the UAV allowed for greater appreciation of the extent of the geologic features observed in outcrop as they extended under the clear Caribbean waters. Really unparalleled photos. 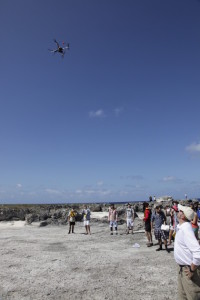 UAV launching around field trip participants during a test flight above the outcrop of interest. Photo by Chris Zahm.

How about LIDaR? Can you describe the technique in layman’s terms?

LIDaR (LIght Detection and Ranging or Laser Imaging Detection and Ranging) is an optical remote sensing technology, similar to radar or sonar, that works by illuminating the target with laser light and analyzing the backscattered light. An active source sends a light beam or laser out to an object which reflects the light back to a sensor. The time it takes for the light beam to travel to and from the object allows for the exact distance and location to be mapped. There are two main ways that LIDaR data is collected. One is using ground-based or terrestrial systems and the other is aerial LIDaR systems which are mounted onto aircraft.

There are advantages to both systems, but this technology is also evolving rapidly. Much like the wave of digitial cameras, LIDaR technology seeks high resolution photos relatively quickly with smaller size devices. Like UAVs, it is almost impossible to make statements on the state-of-the-art due to the rapidity of evolution.

From Wiki: LIDaR (LIght Detection and Ranging or Laser Imaging Detection and Ranging) is an optical remote sensing technology that can measure the distance to, or other properties of, targets by illuminating the target with laser light and analyzing the backscattered light.

What’s the bottom line here? How will this research help people?

Nearly everything we use on a daily basis has something that’s been found in an Earth resource. That’s true whether it’s from the water we drink, to the cars we drive, to the fuel we put in the cars, to the roads we drive on, electricity, anything plastic (think about the amount of plastics in a hospital). All these things have something come from the Earth, often from resources underground.

How well we can locate and exploit these underground resources is based on how well we know the geologic systems of our planet.

Outcrop exposures help with that. They are often times the most revealing of all geologic data that we use to learn about the geologic system. Whatever methods we can use to improve how we view the exposed geologic outcrops, the better we learn the system and the better we are at knowing where to find these systems in other places. And that means more resources for people.