Chimpanzee wars not due to human influence, says study

Lethal aggression is something that chimpanzees naturally do, the study says, regardless of whether human impacts are high or low 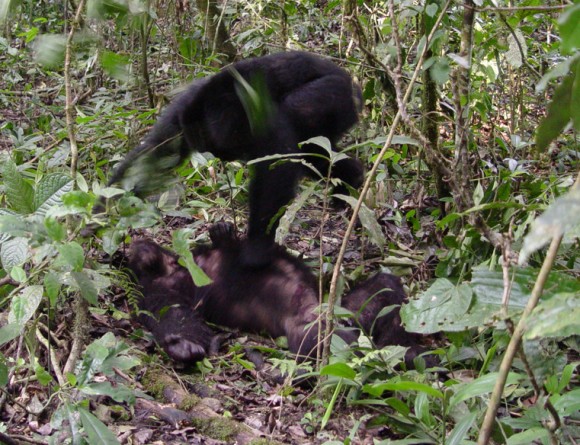 Ngogo male chimps have just killed a male from a neighboring group. After the male is dead, one of the Ngogo males leaps on the body of the dead animal.
Image courtesy of John Mitan

In the latest “Planet of the Apes” movie, human aggression spurs chimpanzees into battle. Some researchers have made similar claims for real apes: that feeding chimpanzees bananas, or clearing their forest homes, causes them to be unusually violent. A recent analysis of data from all long-term chimpanzee study sites in Africa has found that is not the case.

In the 1970s, Jane Goodall’s reports of chimpanzee violence caught the attention of a global audience. Since then, many people have compared chimpanzee intergroup aggression to primitive warfare and have argued that chimpanzee violence is an adaptive strategy that gives the perpetrators an edge. Others have argued that chimpanzees kill because their behavior has been changed by human activities, such as researchers feeding chimpanzees or the destruction of habitat as people clear forest for farms. A new study looking at data from chimpanzees and their close relatives, bonobos (also called pygmy chimpanzees), finds that human impact isn’t the culprit.

Chimps and bonobos are the two living species most closely related to us of all the animals alive today; we share the most in common in terms of genetics and evolutionary history.

Wilson worked with 29 co-authors at sites across Africa, to gather the necessary data. The study compiled over five decades of information from 18 chimpanzee communities and four bonobo communities. Wilson said:

People have long been interested in chimps as a way to better understand the evolution of human behavior.

It’s still an open question whether this sort of violence is something that has happened continuously in human evolutionary history, or whether it arose independently in humans and chimps. Perhaps our common ancestor, which we believe lived 5 to 7 million years ago, also had high rates of violence, too.

The study began as a response to a growing number of commentators claiming that chimpanzee violence was caused by human impacts. Wilson said:

Via University of Minnesota