The cells of an African fruit have walls made of tightly coiled cellulose strands that are excellent for reflecting light.

Most colors in nature are produced by pigments, which are chemicals that selectively absorb and reflect different wavelengths of light. Most paints, for example, are a blend of several pigments, intended to reflect light in such a way that you see a specific color. But on September 10, 2012, scientists publishing in the Proceedings of the National Academy of Sciences said that the “brightest biological substance” in nature – a spectacular African fruit that is intensely colored blue – creates its own color not from a pigment, but from specialized structures in its cells. 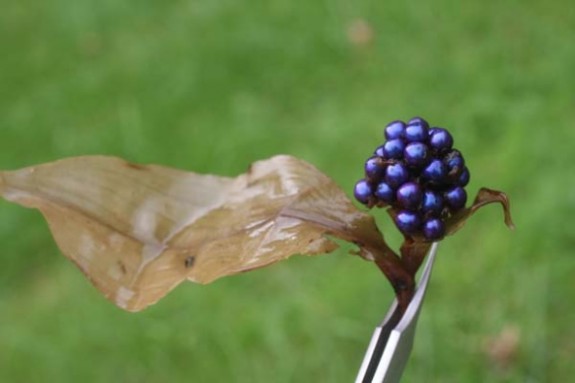 Some pigments fade over time. But, even when it dies – although its leaves turn dry and brown – the fruit of Pollia condensata continues to shine for years with an iridescent hue. That’s becaues its color comes not from a pigment, but from specialized cells within the fruit. Image Credit: P.J. Rudall.

This African fruit is called Pollia condensata – sometimes called the marble berry. It’s found growing wild the forests of Ethiopia, Mozambique, Tanzania and other African countries. It has shiny blue berries – said to be hard as a rock – that are mainly seeds. Although it’s called a fruit, it can’t be eaten. In some African nations, the small metallic fruits have been used for decorative purposes because their colors stay intense for many years. 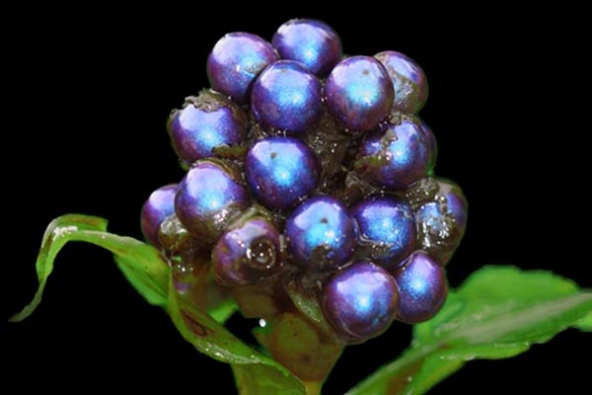 This African fruit is hard as a rock. It can’t be eaten, but it’s had a decorative use in the past because its color stays intense for years. Image Credit: P. Moult

Scientists call this plant’s way of producing color structural color. It’s known in animals, for example, the brilliant hued feathers of male peacocks, the carapaces of certain beetles and the wings of some butterflies. These creatures all use different structures and materials to their iridescence. The African plant is the first demonstration of structural color in a fruit. 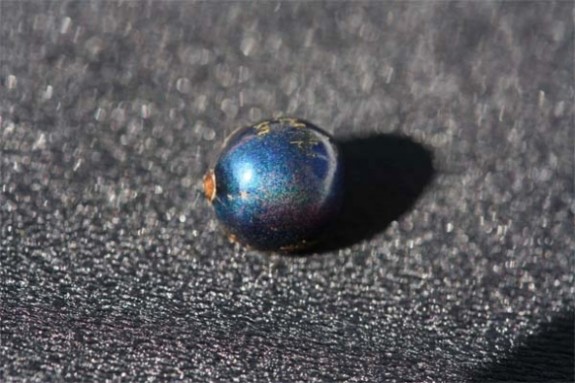 Scientists have learned that cells in the fruit Pollia condensata have walls made of tightly coiled cellulose strands that are excellent for reflecting light. Image Credit: R. Faden

A specimen of P. condensata at the Kew Botanical Gardens in London – gathered in Ghana in 1974 – maintained its intense color. Researchers from the Kew, the University of Cambridge and the Smithsonian Natural History Museum were intrigued. They wanted to know how this plant keeps its color for so long. What they found is that cells in the fruit of Pollia condensata have walls made of tightly coiled cellulose strands. Different spacings between the strands in each cell reflect light of different wavelengths, producing the iridescent blue colouring of this plant. 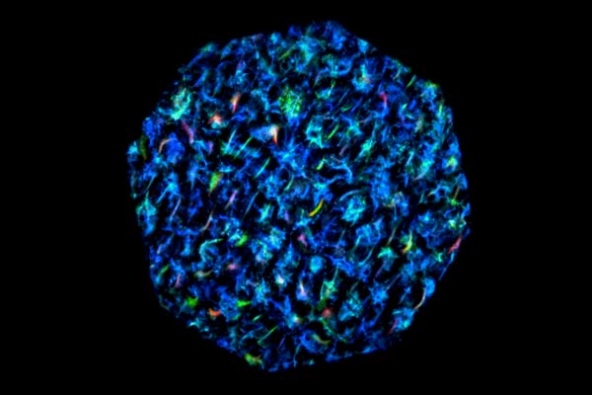 Bottom line: A plant found throughout Africa – called Pollia condensata, or marble berry – has been found by scientists to be the “brightest biological substance” in nature. Its brightness comes not from a pigment, but from specialized cells within the plant. Scientists call this sort of color structural color. Although some animals, such as peacocks, are known to produce color in this way, this is the first example of structural color within a fruit.