In the path of totality of the August 2017 total solar eclipse, bees stopped flying, says a study. “It was like ‘lights out’ at summer camp.” 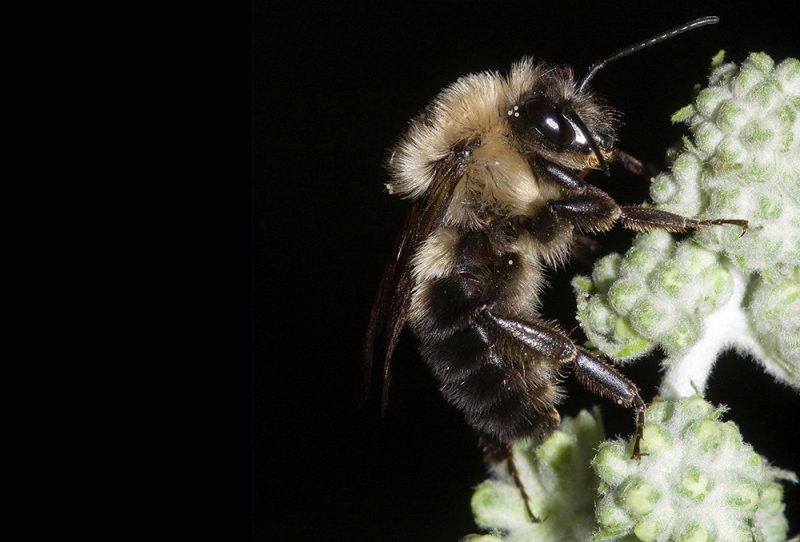 To study the solar eclipse’s influence on bee behavior, researchers at the University of Missouri organized a cadre of citizen scientists and elementary school classrooms in setting up acoustic monitoring stations to listen in on bees’ buzzing — or lack thereof — as the 2017 eclipse passed over. The results, published October 10, 2018, in the peer-reviewed journal Annals of the Entomological Society of America, were clear and consistent at locations across the country: Bees stopped flying during the period of total solar eclipse.

Candace Galen is professor of biological sciences at the University of Missouri and lead researcher on the study. She said in a statement:

We anticipated, based on the smattering of reports in the literature, that bee activity would drop as light dimmed during the eclipse and would reach a minimum at totality. But, we had not expected that the change would be so abrupt, that bees would continue flying up until totality and only then stop, completely. It was like ‘lights out’ at summer camp! That surprised us.

Galen said that, as anticipation mounted for the eclipse,

… it seemed as if everyone and their dog was asking me what animals would do during a total eclipse.

However, few formal studies had ever examined the behavior of insects, specifically, during a solar eclipse, and none had looked at bees. Galen and colleagues, meanwhile, had recently field-tested a system to track bee pollination remotely by listening for their flight buzzes in soundscape recordings. Galen said:

It seemed like the perfect fit. The tiny microphones and temperature sensors could be placed near flowers hours before the eclipse, leaving us free to put on our fancy glasses and enjoy the show. 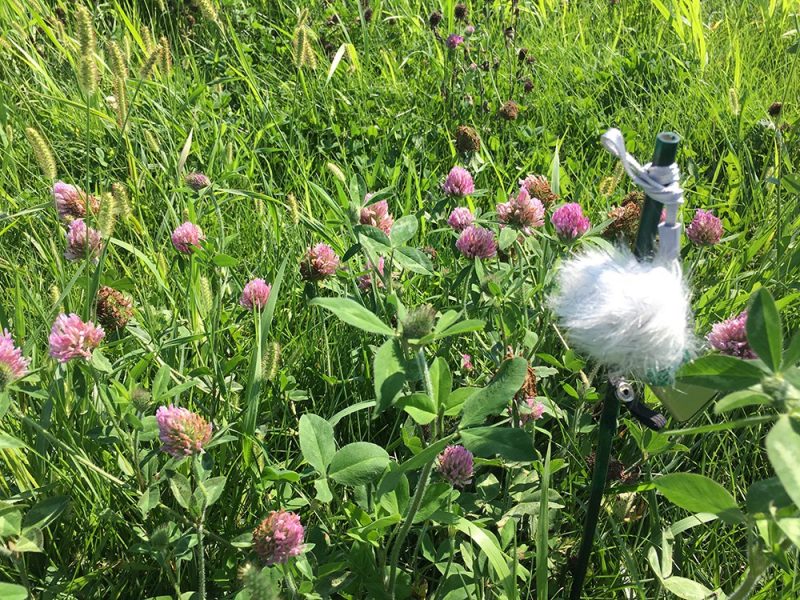 Here, what looks like a white ball of fur is actually a flash-drive-sized microphone with a windscreen, tied to a short post in a patch of clover. Image via Candace Galen, Ph.D.

The project engaged more than 400 participants — including scientists, members of the public, and elementary school teachers and students — in setting up 16 monitoring stations in the path of totality in Oregon, Idaho and Missouri. At each location, small USB microphones were hung on lanyards near bee-pollinated flowers in areas away from foot and vehicle traffic. In some of the locations, light and temperature data were also captured. Participants then sent the devices to Galen’s lab, where the recordings were matched up with the eclipse periods from each location and analyzed for the number and duration of bee flight buzzes.

The data showed that bees remained active during the partial-eclipse phases both before and after totality, but they essentially ceased flying during the period of totality. Just one buzz was recorded during totality in all of the 16 monitoring locations. However, shortly before and shortly after totality, bee flights tended to be longer in duration than at times early in the pre-totality phase and late in post-totality. Galen and colleagues interpret these longer flight durations as an indicator of slower flight under reduced light or possibly as the bees returning to their nests. 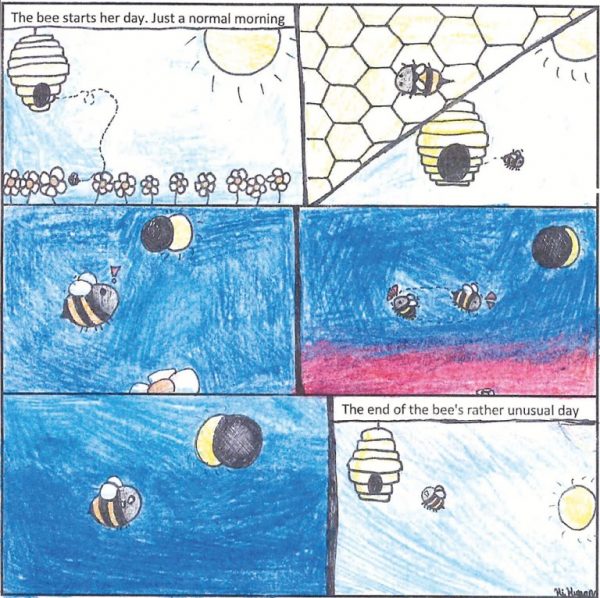 After elementary-school students participated in a study of bee behavior during the 2017 total solar eclipse, researchers leading the project asked the students to illustrate the eclipse from the bees’ perspective as a way to synthesize their results. Here’s an illustration by Olivery Ni, then a 5th grader at Ulysses S. Grant Elementary School in Columbia, Missouri. Image via Entomology Today.

Another total solar eclipse for North America is not far away: April 8, 2024. Galen says her team is working to enhance its audio-analysis software to distinguish the flights that foraging bees make when they leave or return to their colonies. Thus prepared, she hopes to answer the question of whether bees return home when the “lights go out” at totality in 2024.

Source: Pollination on the Dark Side: Acoustic Monitoring Reveals Impacts of a Total Solar Eclipse on Flight Behavior and Activity Schedule of Foraging Bees