Rescuing 11 elephants from a mud hole

Asian elephants got stuck in a mud-filled old bomb crater in Cambodia. A collaborative rescue effort saved them all.

On March 24, 2017, a collaborative effort between local farmers and conservationists saved 11 Asian elephants that had gotten stuck in a mud hole in the Keo Seima Wildlife Sanctuary in Cambodia.

The hole – a mud-filled old bomb crater that dates to the Vietnam War – had been enlarged by farmers to store water. Its roughly 10-foot (3-meter) walls were too high for the elephants to scale and, as the mud dried, the elephants became further entrenched.

When the farmers discovered the elephants, they notified the Department of Environment, who in turn notified the World Conservation Society (WCS) to mobilize a rescue. 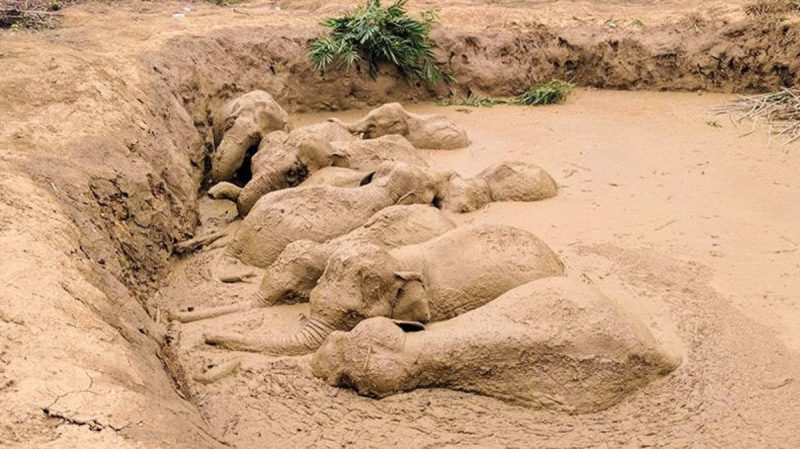 The elephants, before they were freed. Image via Wildlife Conservation Society.

A few hours after the work began, all were free.

The rescue averted what would have been a tragedy, said Tan Setha, WCS Technical Advisor to the protected area. Setha said in a statement:

This herd consisted of three adult females and eight juveniles of various ages, including a male that had almost reached maturity. These elephants represent an important part of the breeding population in Keo Seima Wildlife Sanctuary, and their loss would have been a major blow for conservation.

This is a great example of everyone working together in Cambodia to save wildlife. Too often the stories around conservation are about conflict and failure, but this is one about cooperation and success. That the last elephant to be rescued needed everyone to pull together on a rope to drag it to safety is symbolic of how we have to work together for conservation.

Bottom line: Eleven Asian elephants were rescued from a mudhole in Cambodia in March 2017, thanks to a collaboration between local farmers and conservatioinists.