Scientists at MIT and elsewhere say that the Antarctic ozone hole shows signs of shrinking. They say they expect it to close permanently by mid-century. 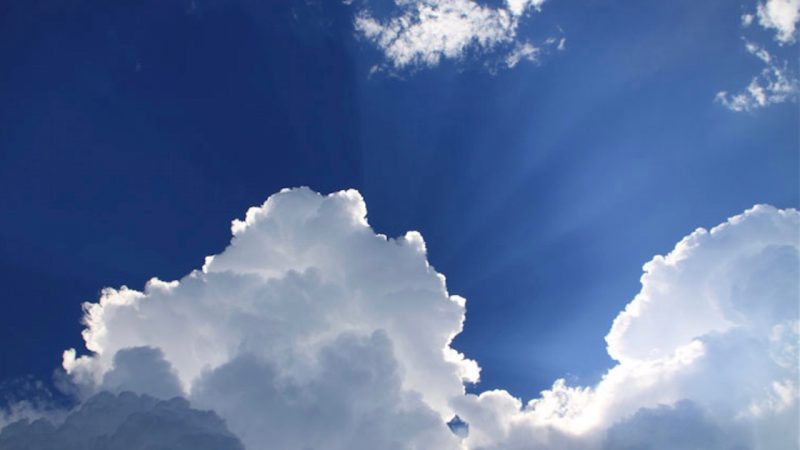 Every year for the past few decades – during Southern Hemisphere spring, around September and October – chemical reactions involving chlorine originating from chlorofluorocarbons (CFCs) have been observed to cause ozone above Earth’s south polar region to be destroyed. This week (June 30, 2016), scientists led by Susan Solomon at MIT said they’ve now observed “the first fingerprints of healing” in the Antarctic ozone layer. Their work is published in the journal Science.

They also showed, for the first time, that this recovery has slowed somewhat at times due to the effects of volcanic eruptions from year to year.

Overall, however, they said, the ozone hole appears to be on a healing path. In a statement from MIT, they said they see no reason why:

Ozone is considered pollution above cities, but, high in Earth’s stratosphere, it protects us from harmful ultraviolet (UV) radiation from the sun, by reflecting it back into space. 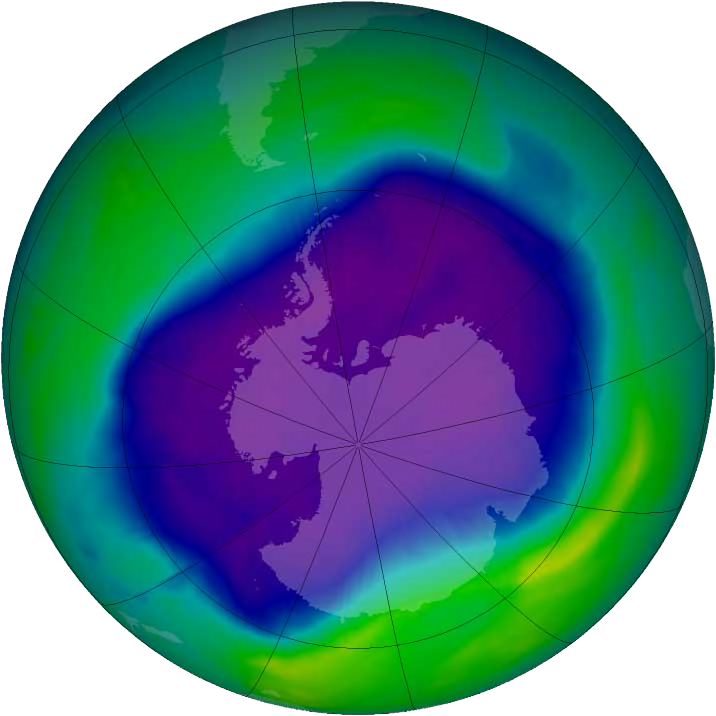 The largest ozone hole ever recorded, in 2006, via NASA.

In 1974, M.J. Molina and F.S. Rowland published a laboratory study demonstrating that CFCs – which once were emitted by dry cleaning processes, old refrigerators, and aerosols such as hairspray – have the ability to break down ozone in the presence of high frequency UV light. Further studies estimated that the ozone layer would be depleted by CFCs by about 7% within 60 years and, based on these studies, the U.S. banned CFC’s in aerosol sprays in 1978.

No one expected the British Antarctic Survey discovery in 1984 of a recurring and dramatic depletion of ozone over Antarctica, in the spring. Satellites quickly confirmed these results, which were tracked backward in time using ground-based data that began in the 1950s, and the term Antarctic ozone hole entered the popular lexicon.

In 1987, virtually every country in the world signed on to the Montreal Protocol in an effort to ban the use of CFCs and repair the ozone hole.

Since the 1980s, scientists have monitored the ozone hole each year.

Read a history of the ozone hole 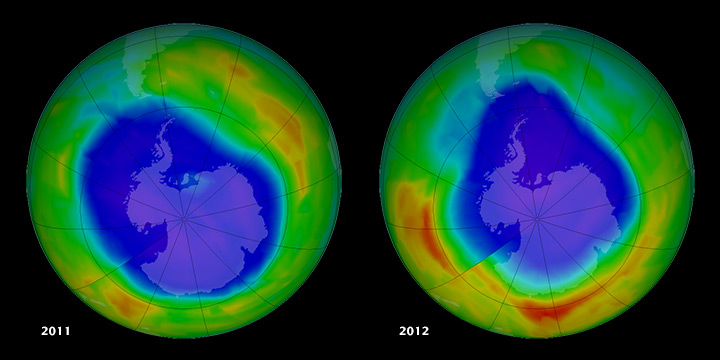 Susan Solomon was among the first to show why the ozone hole appears over Earth’s south polar region, despite the fact that ozone-depleting CFCs are present throughout Earth’s stratosphere. The reason has to do with the fact that Antarctica is the coldest place on Earth. The scientists’ statement said:

Ozone is sensitive not just to chlorine, but also to temperature and sunlight. Chlorine eats away at ozone, but only if light is present and if the atmosphere is cold enough to create polar stratospheric clouds on which chlorine chemistry can occur — a relationship that Solomon was first to characterize in 1986.

Read more: Why has an “ozone hole” appeared over Antarctica? 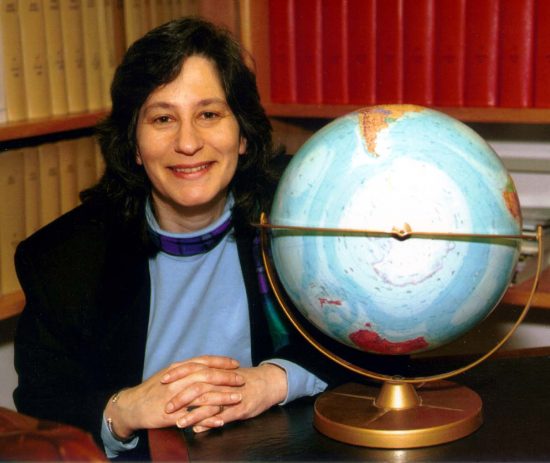 Ozone depletion in Antarctica starts each year around late August, as the dark Antarctic winter is just ending. The hole is fully formed by early October, and many studies have been focused in October, at the yearly peak of Antarctic ozone depletion. Solomon and her colleagues looked earlier in the year, at ozone levels in September, when it’s still extremely cold in Antarctica, and the ozone hole is opening up.

They tracked the yearly opening of the Antarctic ozone hole in the month of September from 2000 to 2015.

They did the tracking by analyzing ozone measurements taken from weather balloons and satellites, as well as satellite measurements of sulfur dioxide emitted by volcanoes, which can also enhance ozone depletion. And, they tracked meteorological changes, such as temperature and wind, which can shift the ozone hole back and forth.

They then compared their yearly September ozone measurements with simulations created via computer models, which predict ozone levels based on the amount of chlorine that scientists have estimated to be present in the atmosphere from year to year.

The researchers found that the ozone hole has declined compared to 2000 and further found that this decline matched the predictions of the models. They say that more than half the shrinkage was due solely to the reduction in atmospheric chlorine. 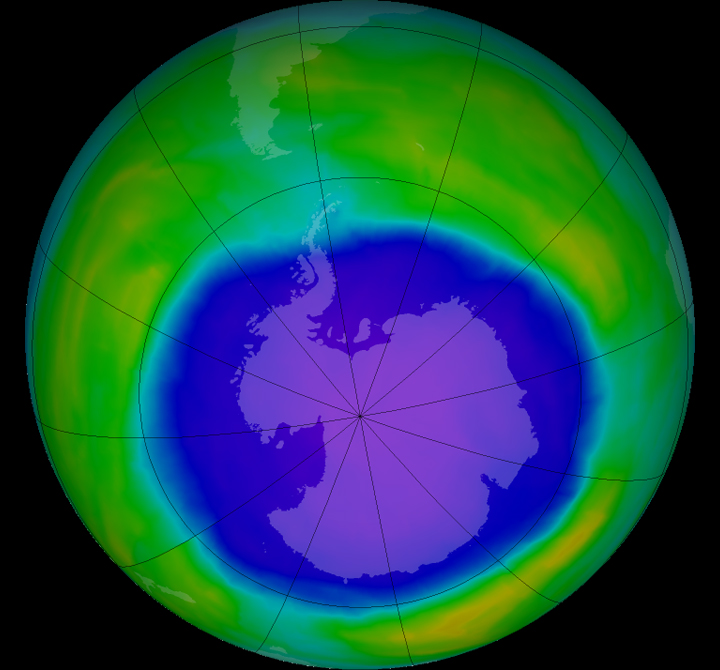 The team did note that the 2015 ozone hole reached a record size, despite the fact that global atmospheric chlorine continued to drop since the signing of the Montreal Protocol. Solomon and her colleagues realized that the 2015 spike in ozone depletion was due primarily to the eruption of the Chilean volcano Calbuco. Their statement said:

Volcanoes don’t inject significant chlorine into the stratosphere but they do increase small particles, which increase the amount of polar stratospheric clouds with which the human-made chlorine reacts.

Science was helpful in showing the path, diplomats and countries and industry were incredibly able in charting a pathway out of these molecules, and now we’ve actually seen the planet starting to get better.

… We can now be confident that the things we’ve done have put the planet on a path to heal, which is pretty good for us, isn’t it?

Bottom line: Scientists led by Susan Solomon at MIT – whose tracked Antarctic ozone in the month of September from 2000 to 2015 – say that they’ve observed signs of healing in the Antarctic ozone layer.