For the second time in two days, a powerful earthquake has struck Chile. Today’s quake was 7.6 magnitude. It’s considered an aftershock of the 8.2-magnitude quake on April 1.

For the second time in two days, a powerful earthquake has struck off the west coast of northern Chile. Today’s quake – which took place late last night, local time, on April 2 – was 7.6 magnitude. It follows an 8.2-magnitude quake in northern Chile on April 1. Today’s quake is considered an aftershock of the April 1 earthquake. Although the April 1 quake produced a tsunami that propagated across the Pacific, and although a tsunami warning was issued following today’s aftershock, no tsunami warning is in effect at this time.

The earlier earthquake triggered dozens of significant aftershocks before this one, CNN said. They also reported that four men and one woman died as a result of the earlier quake, and that about 300 prisoners escaped from northern port city of Iquique in the earlier quake’s immediate aftermath. Meanwhile, Voice of America reported that six people died in the April 1 8.2-magnitude quake.

There are no details at this time on deaths or damages from today’s 7.6-magnitude aftershock.

The details of today’s powerful aftershock, from USGS, are as follows: 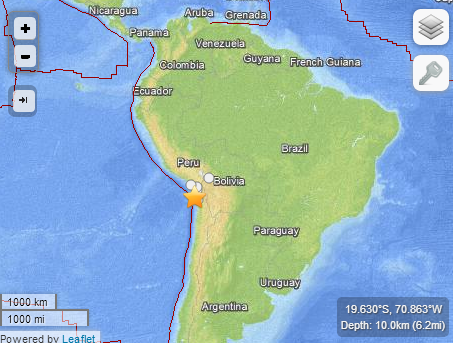 Location of the 7.6-magnitude earthquake in northern Chile on April 2-3, 2014. Image via USGS

The April 3, 2014 7.6-magnitude earthquake off the west coast of northern Chile occurred as a result of thrust motion at a depth of approximately 40 km, 23 km south of the city Iquique. The location and mechanism of the earthquake are consistent with slip on the plate boundary interface, or megathrust, between the Nazca and South America plates. At the latitude of the event, the Nazca plate is subducting beneath South America at a rate of ~73 mm/yr.

This earthquake is an aftershock of the M 8.2 subduction zone earthquake that occurred April 1, 2014. The M 8.2 event triggered a tsunami with measured heights near 2 meters along the northern Chile and southern Peru coasts. Since the M8.2 event, 47 aftershocks ranging from M 4.2 to this M 7.8 event have occurred, including a M 6.4 on April 2. The current seismic sequence was preceeded by a foreshock sequence that began on March 16, 2014, with a M 6.7 earthquake close to the epicenter of the April 1 M 8.2 event. This segment of the subduction zone, known as the Iquique or Northern Chile seismic gap, last ruptured during the 1877 M8.8 Iquique earthquake. Other recent large plate boundary ruptures bound the possible rupture area of the April 1 event, including the 2001 M 8.4 Peru earthquake adjacent to the south coast of Peru to the north, and the 2007 M 7.7 Tocopilla, Chile and 1995 M 8.1 Antofagasta, Chile earthquakes to the south.

Bottom line: For the second time in two days, a powerful earthquake has struck Chile. Today’s quake – which took place late last night, local time, on April 2 – was 7.6 magnitude. It’s considered an aftershock of the 8.2-magnitude quake on April 1.