Video of 20 spectacular cloud-to-ground lightning strikes that took place on a single afternoon in Mutare, Zimbabwe.

This amazing time-lapse shows 20 spectacular cloud-to-ground lightning strikes that took place during two very local afternoon thunderstorms on February 27, 2016. Sixteen of these occurred in just 14 minutes around the margins of a single intense storm cell that developed over the suburbs of Chikanga, Hobhouse and Zimta Park, which are all near Mutare, Zimbabwe.

I have never before witnessed a thunderstorm in which almost 100% of the lightning has been cloud-to-ground discharges and pity those who were on the receiving end of the ones which landed in the densely populated areas.

The two storms interrupted what has been an prolonged drought that has affected Mutare and Eastern Zimbabwe for the past few months. Such intense thunderstorms are uncommon late in the rainy season and are a sign that it’s a poor one. Their propensity to generate so many ground strikes results in death, serious injury and structural damage and is the reason why Zimbabwe has one of the highest per-capita lightning fatality rates in the world.

This time-lapse is a compilation of short sequences and single frames extracted from three short videos taken using a tripod mounted Panasonic Lumix DMC-TZ10 compact camera in scenery mode. In the first section the strike sequences play back at normal speed, in the second single selected best frames are displayed for one second each and the third section is a repeat of the first.

By the way, you may be interested to know that the 20th lightning strike captured above hit the same ridge as the straight lightning bolt of February 15, 2015, which was also published here at EarthSky, and which you can see below in a comparison with the recent lightning storm. They are not only geographically close, but also took place at almost the same time of year. 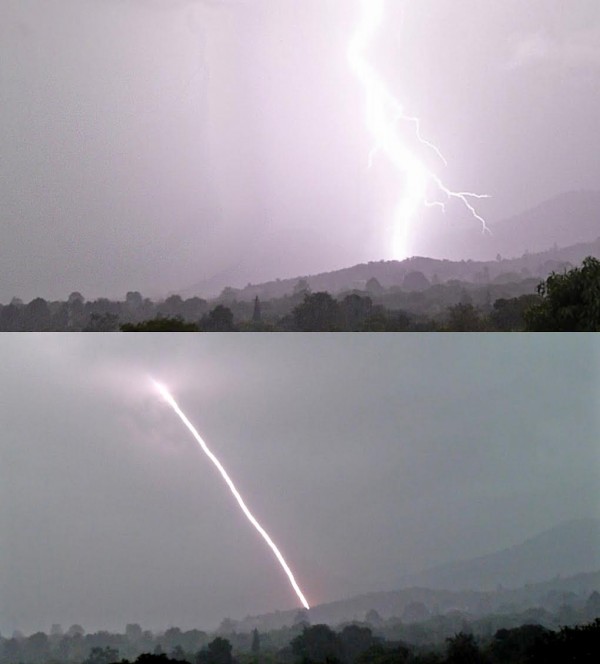 February 27, 2016 lightning near Mutare, Zimbabwe (above) in comparison to the straight lightning bolt recorded from the same location on February 15, 2016. Photos and video on this page by Peter Lowenstein.