$40 billion a day for solar super-storms

The probability of another event like the 1859 Carrington event is – at any given time – low. But many believe it’s “almost inevitable” one will occur, eventually. A new study explores the risks. 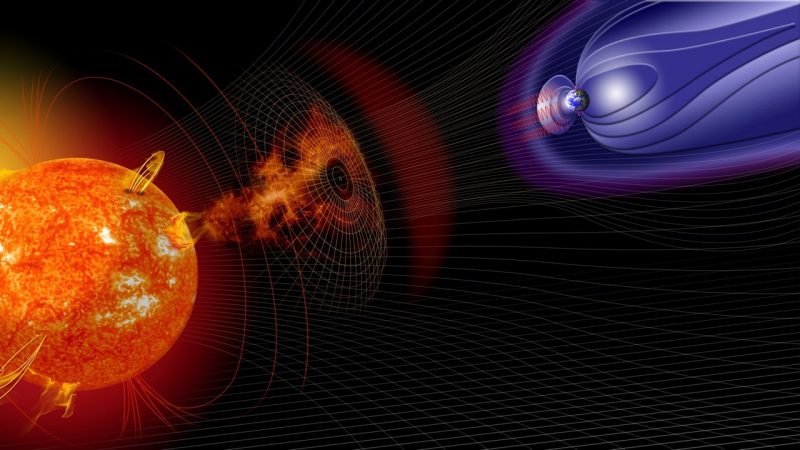 Artist’s concept of events on the sun changing the conditions in near-Earth space. Image via AGU/ NASA.

The American Geophysical Union (AGU) reported on January 18, 2017 that electricity blackouts from an extreme space weather event – generated by a super-storm on the sun – could cost the U.S. up to $40 billion daily, or more. The AGU journal Space Weather published a new study on this subject, which indicates that more than half the financial loss would happen outside the blackout zone. An AGU statement said:

Under the study’s most extreme blackout scenario, affecting 66 percent of the U.S. population, the daily domestic economic loss could total $41.5 billion plus an additional $7 billion loss through the international supply chain.

Previous studies focused on direct economic costs within the blackout zone, and did not take into account indirect domestic and international supply chain loss. Study co-authors include researchers from the Cambridge Centre for Risk Studies at University of Cambridge Judge Business School; British Antarctic Survey; British Geological Survey and University of Cape Town.

What are solar super-storms? They often start with solar flares, which are common events on the sun’s surface, more common during the peak of the sun’s 11-year cycle of activity. The strongest solar flares are typically accompanied by highly energetic events called coronal mass ejections (CMEs), during which huge bubbles of plasma and magnetic fields are propelled outward from the sun. Over the course of several hours, a billion tons of material may be lifted from the sun’s surface and accelerated to speeds of a million miles per hour. The resulting shocks ripple through our solar system, creating what scientists call extreme space weather.

These extreme space weather events occur often, but they affect Earth only sometimes. That’s because the charged solar particles released during these events aren’t always aimed our way. Then again, sometimes they are.

Boom! A CME lifts off from the sun’s surface to space. This image was obtained in 2001 by the Solar and Heliospheric Observatory (SOHO) and is via ESA and NASA.

The biggest earthly effect from a solar storm in recent memory happened on March 13, 1989. The storm on the sun caused auroras that could be seen as far south as Florida and Texas. It caused some satellites in orbit to lose control temporarily, and – most significantly – it sparked an electrical collapse of the Hydro-Quebec power grid, causing a widespread electrical blackout for about nine hours.

The 1989 event, though, was small in comparison to what’s known as the Carrington event of 1859. It’s named the British astronomer Richard Carrington, who spotted the preceding solar flare, and is the largest-ever solar super-storm on record. According to an article by Ashley Dale of the University of Bristol in Physics World in 2014:

This massive CME released … the equivalent to 10 billion Hiroshima bombs exploding at the same time. [It] hurled around a trillion kilograms of charged particles towards the Earth at speeds of up to 3,000 km/s. Its impact on the human population, though, was relatively benign as our electronic infrastructure at the time amounted to no more than about 200,000 kilometers of telegraph lines.

And that is the issue. These events on the sun, and their accompanying CMEs, aren’t harmful to earthly life. After all, life on Earth has evolved for billions of years, as occasional solar super-storms took place. But these space weather events are harmful to human technologies, such as satellites and electrical grids.

That’s why NASA has installed a fleet of heliophysics observatories in space, which are always on the watch for these explosions. NOAA’s Space Weather Prediction Center uses the data from these observatories to run simulations and make predictions about if and when CMEs will arrive at Earth. They then alert appropriate groups so that power companies, airlines, and so on can take precautions in the event of a solar storm. For example, if a strong CME is on its way, utility companies can redirect power loads to protect the grids.

And it’s also why U.S. President Barack Obama signed an executive order on October 14, 2016, calling for preparations to be made for extreme space weather events. It outlined the country’s contingency plan in the event such weather events lead to significant disruption to systems like the electrical power grid, satellite operations or aviation. Read more about the Obama plan at Newsweek.

So there are safeguards in place, to protect us against extreme space weather events. Moreover, electrical engineering experts are divided on the possible severity of blackouts caused by these events. As AGU explained:

Some believe that outages would last only hours or a few days because electrical collapse of the transmission system would protect electricity generating facilities, while others fear blackouts could last weeks or months because those transmission networks could in fact be knocked out and need replacement. 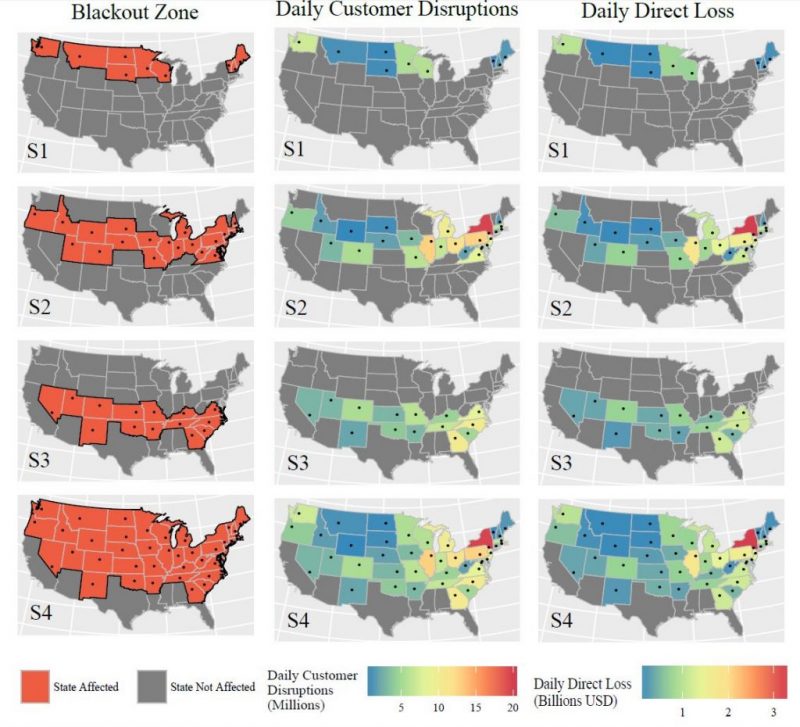 Still, scientists are people who like to have a deep understanding of things. The authors of the recent study published by AGU said they felt it was important to explore the risks in more depth. Co-author Edward Oughton of the Cambridge Centre for Risk Studies at Cambridge Judge Business School said:

We felt it was important to look at how extreme space weather may affect domestic U.S. production in various economic sectors, including manufacturing, government and finance, as well as the potential economic loss in other nations owing to supply chain linkages.

It was surprising that there had been a lack of transparent research into these direct and indirect costs, given the uncertainty surrounding the vulnerability of electrical infrastructure to solar incidents.

The study’s scope was guided by a July 2015 conference held at Cambridge Judge.

The study looks at three geographical scenarios for blackouts caused by extreme space weather, depending on the latitudes affected by different types of incidents. The AGU statement explained:

Manufacturing is the U.S. economic sector most affected by those solar-induced blackouts, followed by government, finance and insurance, and property. Outside of the U.S., China would be most affected by the indirect cost of such U.S. blackouts, followed by Canada and Mexico – as ‘these countries provide a greater proportion of raw materials, and intermediate goods and services, used in production by U.S. firms.’

Bottom line: The American Geophysical Union (AGU) reported on January 18, 2017 that electricity blackouts from an extreme space weather event – generated by a super-storm on the sun – could cost the U.S. up to $40 billion daily, or more.

Read more: What is a coronal mass ejection or CME?