Mizar and its fainter companion star Alcor are easy to spot in the Big Dipper’s handle. 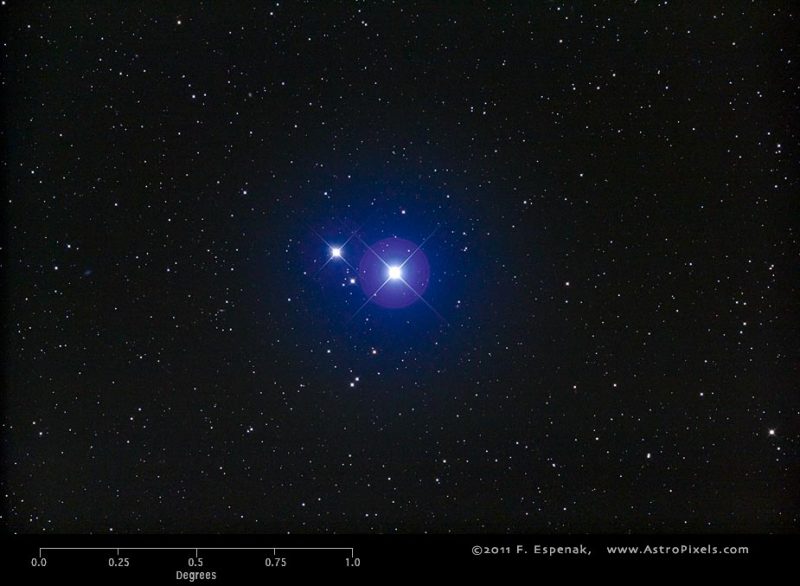 Mizar and its fainter companion star Alcor are one of the most famous double stars in the sky. You’ll spot Mizar first, as the middle star of the Big Dipper’s handle. Look closely, and you’ll see Alcor right next to Mizar.

Mizar and Alcor appear so closely linked in our sky’s dome that they’re often said to be a test of eyesight. But in fact even people with less than perfect eyesight can see the two stars, especially if they’re looking in a dark clear sky. This pair of stars in the Big Dipper’s handle is famously called “the horse and rider.” If you can’t see fainter Alcor with the unaided eye, use binoculars to see Mizar’s nearby companion. 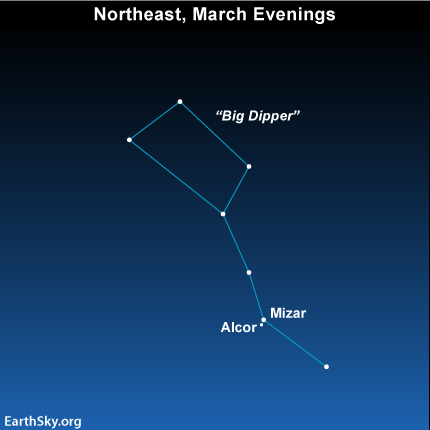 At this time of year,the Big Dipper is in the northeast. The famous star Mizar is second to the end of the Dipper’s handle. Look closely, and you’ll see Alcor right next to Mizar. 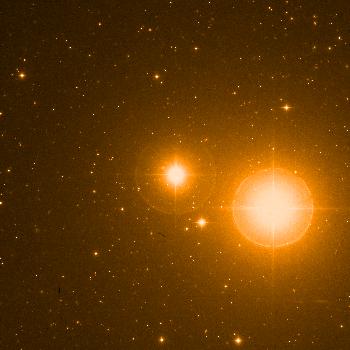 Located in the handle of the Big Dipper, Mizar (brighter) and Alcor (fainter) are one of the most famous visual double stars in the sky. Image via ESO Online Digitized Sky Survey.

Mizar is perhaps the Big Dipper’s most famous star, glorified in the annals of astronomy many times over. Apart from Alcor, Mizar in itself became known a double star in 1650. In fact, it was the first double star to be seen through a telescope.

Few, if any, astronomers back then even dreamed that double stars were anything other than chance alignments of physically unrelated stars. Yet, in 1889, an instrument called a spectroscope revealed that Mizar’s brighter telescopic component consisted of two stars – making Mizar the first binary star ever discovered by spectroscopic means.

At a later date, Mizar’s dimmer telescopic component also showed itself to be a spectroscopic binary, meaning that Mizar consists of two sets of binaries – making it a quadruple star.

As for Alcor, it was long believed that Mizar and Alcor were not gravitationally bound and did not form a true binary star system. In 2009, though, two groups of astronomers independently reported that Alcor actually is itself a binary, consisting of Alcor A and Alcor B. Astronomers now believe that the Alcor binary system is gravitationally bound to the Mizar quadruple system – making six stars in all, where we see only two with the eye.

Thus Mizar and Alcor not only test eyesight, but the limits of our technological vision as well.

Bottom line: Famous double stars Mizar and Alcor are easy to find in the handle of the Big Dipper. Mizar is really four stars, and Alcor is really two stars. So what we see as two stars are really six in one!