The apogalacticon marks where the sun is farthest from the heart of the Milky Way on its 250 million year orbit around the galactic center.

Does the sun orbit around anything?  It turns out that it does!  The sun, and the entire solar system along with it, loops around the galaxy.  As it does, it oscillates towards and away from the galaxy’s center.  The apogalacticon is a milestone on this journey: the location in the sun’s galactic orbit that brings it farthest from the Milky Way’s core.

The Milky Way Galaxy is the conglomeration of over a hundred billion stars in which the sun resides.  All these stars are drawn together through gravitational forces into a pancake-shaped structure that is 100,000 light-years (or 600 quadrillion miles!) across and about 1000 light-years thick.  A CD or DVD, being 100 times wider than it is thick, turns out to be a very good scale model of our galaxy. 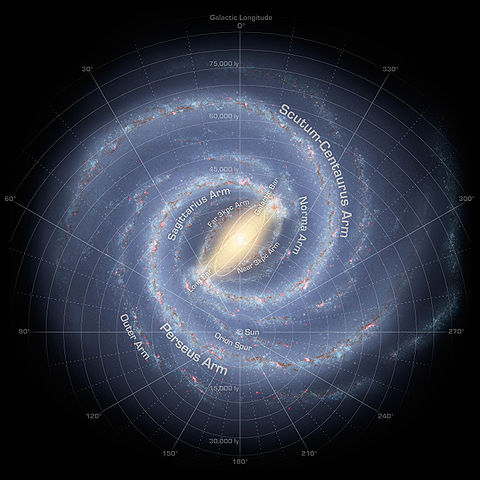 Artist’s conception of the Milky Way Galaxy.  The sun sits on the inner edge of the “Orion Spur”—a stream of stars connected to one of the spiral arms.  Our galaxy is 100,000 light-years across.  Credit: NASA/JPL-Caltech/R. Hurt

All the stars that make up our galaxy orbit the galactic center just like the planets orbit the sun.  The sun goes around once every 250 million years, circling the center of the galaxy at an average distance of 28,000 light-years. This means the sun has looped around the galaxy about 20 times in its five billion year lifetime.  We’re currently headed towards a point in the Hercules constellation, a spot in the sky called the solar apex.  At a speed of roughly 560,000 mph, the sun—and the entire solar system—traverses the width of the earth’s orbit once every two weeks.

Our sun’s orbit is, just like the earth and other planets, not perfectly circular.  Planetary orbits are ellipses; you can imagine them as circles that have been stretched out.  The sun does not sit in the center of the ellipse, it’s actually a little bit off to the side.  This means that the distance from the earth to the sun is not constant, but varies over the course of a year by a few percent.  Our planet makes its closest approach to the sun in early January; it’s farthest from the sun in early July.

Many orbiting bodies behave this way.  As one object orbits another, there is a point where the two bodies are closest together, and a point where they are farthest apart.  These two points are called the periapsis and the apoapsis, respectively.  Occasionally, astronomers modify these words when talking about specific objects. For satellites orbiting the Earth, the points of closest and farthest approach are called perigee and apogee.  For planetary orbits, the locations where a planet is closest or farthest from the sun are named perihelion and aphelion.

And for a star orbiting the galaxy, the point in its orbit where it is closest to the galactic center is called the perigalacticon.  When it is farthest from the center of the galaxy, the star is at apogalacticon.

Things spinning around other larger things is a fairly common theme in astronomy.  The moon orbits the earth.  The earth—along with all the other planets, asteroids, and comets—orbit the sun.  All but two of the planets have moons orbiting them.  Stars revolve around other stars.  There are orbits everywhere we look in the universe.  Even our galaxy has numerous smaller galaxies orbiting it.  The two largest of these satellite galaxies—the Magellanic Clouds—can be seen from the Southern Hemisphere with the naked eye! 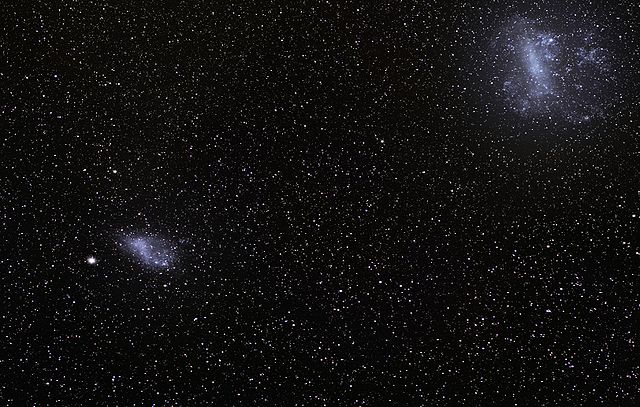 The Large and Small Magellanic Clouds are satellites of the Milky Way and can be seen from the Southern Hemisphere with the naked eye.  Many galaxies have smaller galaxies orbiting them.  Credit: ESO

Our solar system’s trajectory has some interesting implications for future astronomers.  Because of all the interstellar gas and dust sitting in the plane of the galaxy, our view of the galactic center is obstructed.  The only way we’ve been able to learn anything about the heart of the Milky Way is with large infrared telescopes that can peer through the cosmic dust clouds.  However, in another 10 million years or so, we will be considerably higher above the disk of our galaxy and therefore above much of the intervening material.   If humans are still alive then, they might get treated to a stunning vista of the center of our galaxy without ever leaving home!

A 360 degree panoramic view of the Milky Way, stitched together from many photographs.  This is the view of our galaxy from Earth. The galactic core, at center, is obscured by thick dust lanes which block much of the light.  Credit: Digital Sky LLC (via Wikipedia)

Earth’s motion through space is more complex than you might realize.  We spin, we orbit, we wobble—and the entire solar system, it turns out, is hurtling through the spaces between the stars.  The apogalacticon is a marker on our galactic journey.  It is the point at which we are farthest from the center of the galaxy.  Passing the apogalacticon, our solar system starts falling once again towards the galactic center, picks up speed as it plows through interstellar space, and begins another 250 million year journey around the Milky Way.