Can you still see Venus in the east before sunrise? It’s easier from Earth’s Southern Hemisphere than from the northern half of the globe. If you can see it, you just might catch the furtive rendezvous of Venus and Saturn at dawn on February 6, 2021. 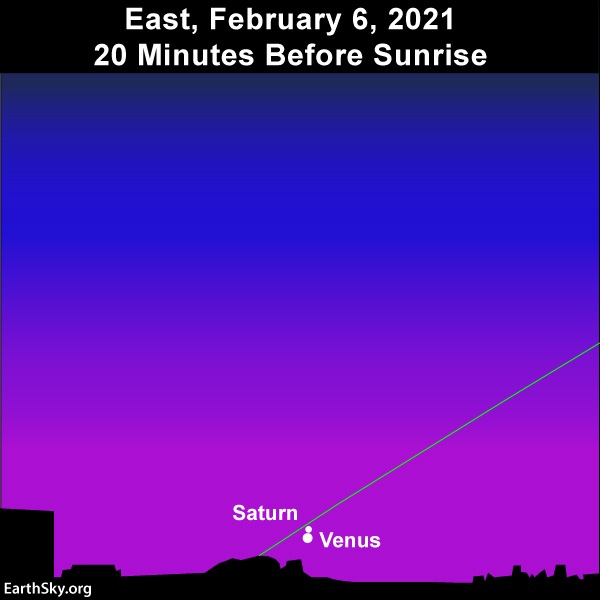 As January 2021 ends and February begins, Venus, the sky’s brightest planet, is rising just ahead of the sun in bright morning twilight. Though not easily visible from the Northern Hemisphere, and only slightly more visible from the southern part of Earth, it’s the brightest planet in the morning sky in early February. If you can see it, keep watching Venus as this week passes, and you just might catch the furtive meeting of Venus and Saturn at dawn on February 6.

The farther south you live, the better your chances of catching the Venus-Saturn conjunction. That’s despite the fact that Venus ranks as the third-brightest celestial body to light up the sky, after the sun and moon. If you need them, use your binoculars to scan for Venus along the eastern horizon as dawn is breaking. We give you the approximate rising time for Venus at various latitudes for early February 2021 (assuming an absolutely level horizon):

Maybe you recall that Saturn was in our evening sky in December. It’s now officially in the morning sky, too, but even harder to see than Venus because it’s fainter. Venus beams some 65 times more brilliantly than Saturn does now. Still, if you aim your binoculars at Venus, you just might see Saturn and Venus taking stage in the same binocular field on the mornings around their February 6 conjunction. At conjunction, Saturn will pass a scant 0.4 degree to the north of Venus. For reference, the moon’s diameter spans 0.5 degree of sky. 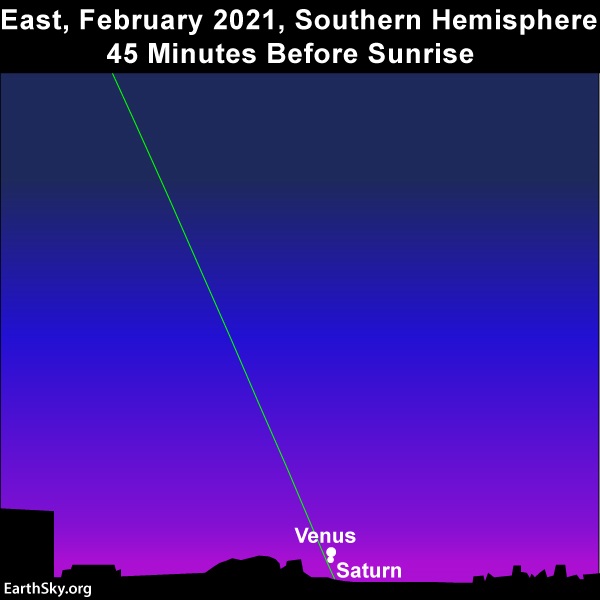 The steeper tilt of the ecliptic gives the Southern Hemisphere the advantate for catching the conjunction of Venus and Saturn before sunrise February 6, 2021.

Given an unobstructed horizon, on or near February 6, the planetary twosome will rise at approximately: 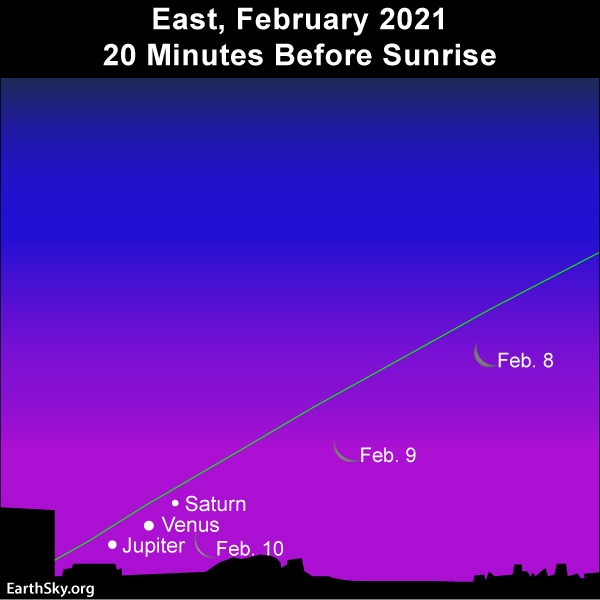 We give you fair warning. These planets will be much harder to see in the real sky than on our sky chart! They’ll be hard to spot, even with binoculars. Read more.