Unicorn meteors proved elusive, after all

We’ve heard no reports so far today from anyone who saw a rich burst of meteors from the constellation of the Unicorn (Monoceros) last night. Looks like the meteor burst did not happen. 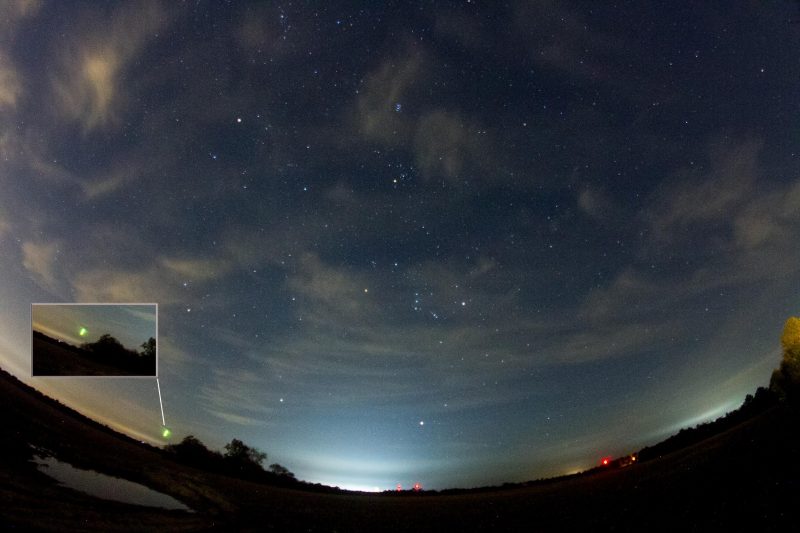 Greg Hogan in Kathleen, Georgia, said this was the best image he got during last night’s Unicorn meteor shower. He said he saw about 15 meteors total between 10:30 p.m. and 12:15 a.m. That’s in contrast to a prediction – for Greg’s part of the globe – of about 75 meteors total. Thank you, Greg!

Meteor Shower A Dud, But Showing Up Half The Fun https://t.co/hIwd1YrvpA The shower was weaker than expected, but like you, it showed up! pic.twitter.com/ximLeD8gMr

This graph from the International Meteor Organization shows visual observations of of the Unicorn meteor shower (alpha-Monocerotids) in 2019. The observations are from amateur astronomers on various parts of the globe. Go to the IMO’s page.

This Thursday night (November 21-22, 2019) – if you’re on the right part of Earth, and are looking at exactly the right time in a dark, clear sky – you have a good chance of witnessing a brief but very rich outburst of meteors known as the alpha Monocerotids. They will radiate from the constellation Monoceros the Unicorn, and many are calling them by the fanciful and fun name Unicorn meteors. And, indeed, in 2019 this usually-minor shower has a high possibility of being unforgettable, although hard to catch.

Here’s how to watch the shower online 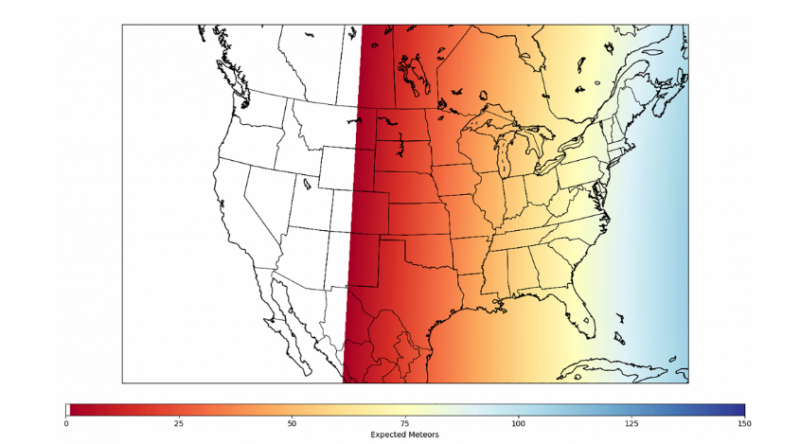 This map shows the total number of meteors observers in the United States can expect to see for this year’s alpha Monocerotid meteor shower, provided the rates are similar to the 1995 outburst. Map via NASA. Looking for information on observing the shower from Europe? Try Guy Ottewell’s blog.

Astronomers Esko Lyytinen of the Finnish Fireball Network and Peter Jenniskens of the SETI Institute and NASA’s Ames Research Center have been tracking the alpha Monocerotids for many years. They realized that the circumstances for the shower in 2019 are nearly identical to 1995, when an outburst did occur, sending the rate up to 400 meteors per hour (several meteors per minute) under optimum conditions. That is why they predicted an outburst with a similar rate for this year. They emphasize that your location on Earth and timing – plus a dark sky – are key elements for watching the shower. Writing in Meteor News on November 6, they explained:

If an outburst takes place it is likely to be centered around 04:50 Universal Time on November 22, with a duration of 15 up to 40 minutes maximum.

That time – 4:50 Universal Time on November 22 – is the same as 11:50 p.m. November 21 for those on the east coast of the U.S.; translate Universal Time to your time. To see the shower, you have to be in the eastern part of North America, short of 110 west longitude, or in western Europe or South America, these scientists say.

Also, remember, the time mentioned above is when the shower is centered. You’ll want to get out there earlier to view it from start to finish. Writing at SkyandTelescope.com, sky writer Bob King (@AstroBob_bk on Twitter) explained:

Lyytinen recommends getting out no later than 4:15 Universal Time, November 22 (11:15 p.m. EST on November 21; translate to your time). The radiant, located in eastern Monoceros, rises around 10 p.m. local time [the time on your clocks regardless of your time zone], so it will be relatively low in the eastern sky for observers in the eastern half of the U.S. and Canada at shower maximum.

South Americans have the best seats while skywatchers in Africa and Western Europe will catch it in the hour or two before dawn. No worries about the moon — the 22%-illuminated crescent won’t rise until after 2 a.m. local time. 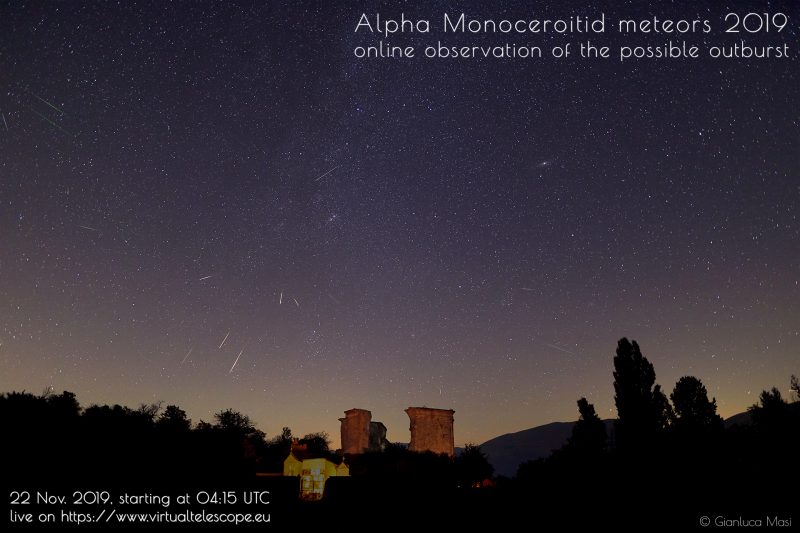 How confident are these astronomers that this outburst will take place? They sound very confident. Jenniskens wrote in an email to EarthSky:

These outbursts are caused by the dust trail of an unknown long-period comet. Dust was released during the previous orbit of the comet, when it was last near the sun. Some meteoroids made a short orbit and came back early, others made a wider orbit and will come back late.

So, in the path of the comet now is a stream of meteoroids, quite smoothly distributed.

That stream moves in and out of Earth’s path over the years. That is the reason why we rarely get to see this shower. Only when the dust trail wanders into Earth’s path, just as Earth is passing the stream, are we hosed by the meteoroids. It is like watering a distant flower [Earth] with a water hose [the meteoroid stream]. Last good sighting was in 1995, and a weaker sighting in 2007 …

We are confident that the stream will be in Earth’s path this year, because the motion of the trail is determined by the gravity of the planets and sun, which we can accurately calculate.

How intense the shower will become depends on where exactly we cross the stream and on your location.

Rates are highest (several per minute at the peak) when the meteors come straight down, in parts of southern America. Here in the USA, peak rates are less because [we’re seeing the radiant point lower in the sky when the shower is peaking and thus] the meteors come in more grazing. 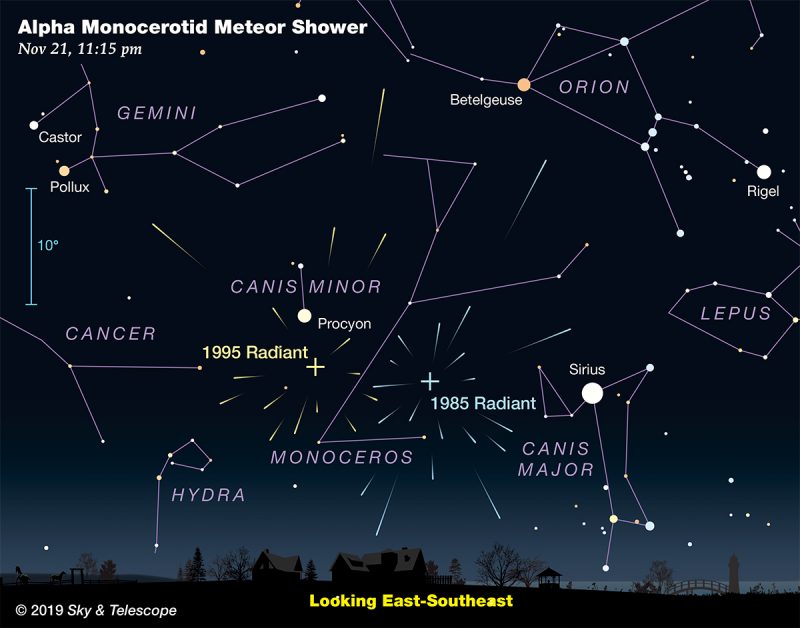 View larger. | This chart is set for Philadelphia at 11:50 p.m. EST on November 21. In that location, at that time, you’d be facing southeast to view the location of the sky toward the alpha Monocerotid radiant point. Go to Stellarium to find out which direction to look from your exact location. Notice the 3 Belt stars of Orion, and the bright star Sirius. On this chart, 2 alpha Monocerotid radiants are marked, 1985 and 1995. The exact radiant of the 2019 shower will be somewhere close to this part of the sky. See a simplified chart of this part of the sky below. Chart via SkyandTelescope.com. Used with permission.

Jenniskens also said that the predicted rate of the meteors at their peak – 400 meteors per hour – will likely last only 15 minutes of the entire 40-minute shower. In other words, over that 15-minute period, you might see 100 meteors. If a rain shower lasted that long, you’d surely call it an outburst, but – even for rain – such outbursts can be an interesting and beautiful natural event. As Jenniskens commented:

Even if you just see a few of these meteors, that is very special.

So go to a dark location with clear field of view around. Look towards the east. 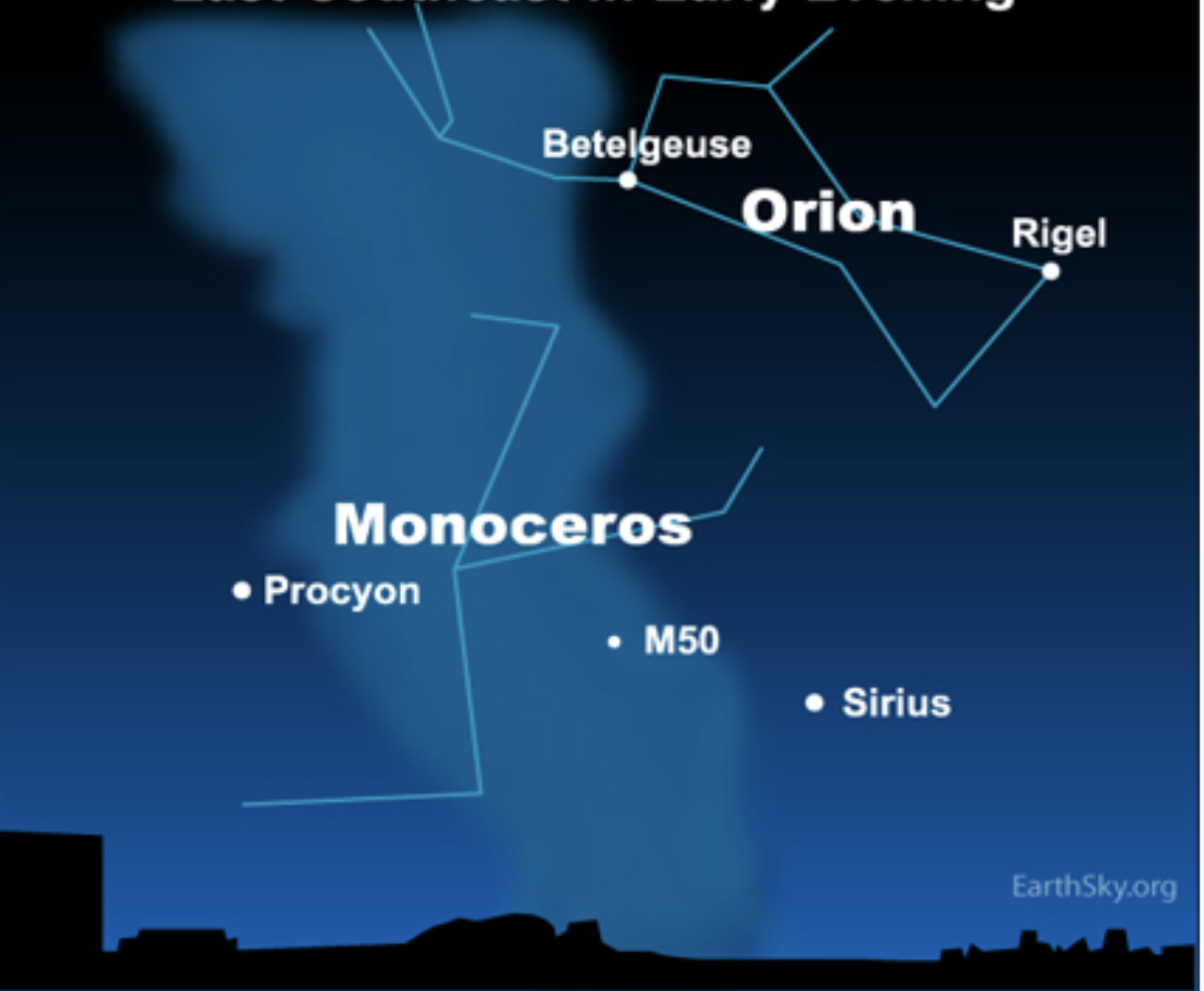 Monoceros the Unicorn – which contains the meteors’ radiant point – isn’t a prominent constellation. But it’s located near some of the most easy-to-spot stars in the night sky, including those of Orion the Hunter (look for Orion’s 3 Belt stars in a short, straight row) and the sky’s brightest star, the Dog Star Sirius. Chart via SkyandTelescope.com. Used with permission. 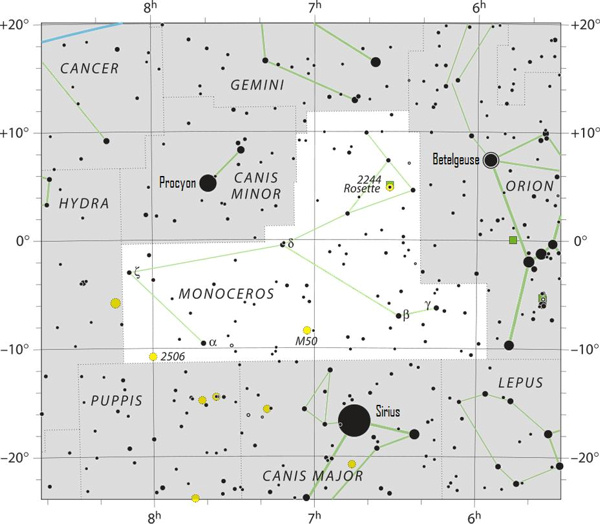 View a larger chart. | A more detailed chart of the constellation Monoceros the Unicorn. Notice the star Sirius and the 3 Belt stars of Orion.

Bottom line: Astronomers are predicting an outburst of meteors on November 21-22, 2019. The shower – called the alpha Monocerotids – is generally considered to be minor. If an outburst takes place it is likely to be centered around 04:50 Universal Time on November 22 with a duration of up to 40 minutes maximum. A rate of 400 meteors per hour is predicted for the 15-minute peak.