Paul Bogard on why we need darkness

Light at night may be a sign of life on Earth, but the darkness will proclaim our true intelligence. Check out this video on why we need darkness, from Paul Bogard.

The dark is good for our sleep, our biology, and the health of our ecosystems. It’s good for our creativity and our spirits, and, yes, it’s even good for our safety and security. That’s the message of Paul Bogard, who has written extensively on the importance of darkness. His book is titled “The End of Night.” His TEDx Talk – above – focuses on why we need darkness. I’ve spent time mulling over both the book and this video and recommend them highly. In this pandemic year – as many wondered whether lockdowns gave us darker skies – you might enjoy thinking about it, too.

Bogard researched night-shift workers, those who are exposed to light during the hours that most bodies crave darkness and sleep. Humans have a circadian trough from approximately midnight to 6 am. The absence of darkness and sleep during this trough contributes to night-shift work being labeled a probable carcinogen, with workers more likely to suffer from obesity, diabetes, cardiovascular issues, depression, substance abuse, and especially breast and prostate cancer. Light at night disrupts the body’s production of melatonin, which is thought to be needed to keep these types of cancers at bay.

But it’s not just night-shift workers who suffer from exposure to lights at night. Any quick look at a photo of the Earth at night shows the great glows of cities and suburbs spilling across the land and down highways into the edges of the countryside. Even when we keep the lights dark outside our own home, the light from our neighbors’ homes seeps around the cracks in our blinds and splashes across our back patio. 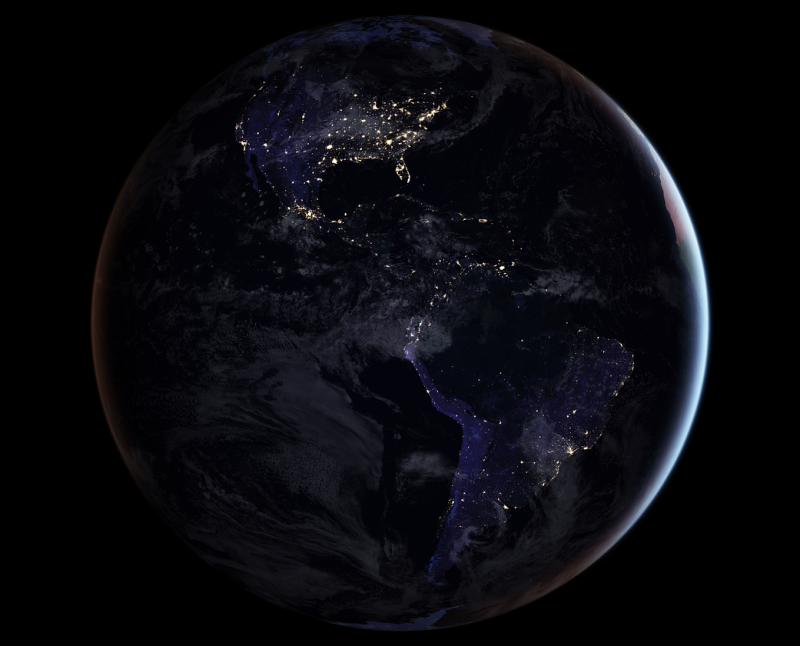 Earth at night, via NASA.

The light we see on maps of Earth at night isn’t just interrupting our sleep or blinding us on a late-night walk with our dog. It’s also wasting money. Bogard claims that billions of dollars are wasted each year throughout the world on light that illuminates nothing on the ground, but instead points straight up.

He points out that proper lighting directs illumination toward the ground, away from the sky and out of the eyes of those nearby. Bright lights near someone’s front door create an illusion of safety, but not true safety, according to Bogard. That’s because the glare shining into our eyes makes it difficult to impossible to see what is hiding in the deep shadows cast by the light.

Policing in some communities has been made much easier with the replacement of constant lighting by motion lights. For example, Bogard recounts how Loveland, Colorado, changed their schoolyard lighting to motion detectors, which made it simple for patrols to see if someone was present or not determined by whether or night the area was dark or light.

The issue with safety and lighting isn’t black or white, or darkness or light. It’s choosing proper lighting for each situation, which helps to make an area safer, saves money, preserves sleep, and protects the dark night sky.

When we protect the night sky, Bogard says, we’re also protecting not just ourselves and our biology but those of the ecosystem around us. In his book “The End of Night,” Bogard writes:

I remember Pierre Brunet arguing in Paris that the presence of an astronomer was the sign of a healthy ecosystem; that when the sky grows too bright for astronomy and the astronomers go away, you know you have a light-polluted sky, and whatever has polluted that sky will eventually pollute other resources, given time.

Countless animals are dependent on darkness, Bogard points out. More than 60% of invertebrates and 30% of vertebrates are nocturnal, having evolved to find food and mates in uninterrupted darkness.

Sea turtles are a well-known example of animal life that needs darkness to survive. Anyone who has been to the oceanfront has seen the lighting adapted to help the sea turtles find their way back to the sea. At my parents’ condo in Florida, the ocean-facing side of lamps have been blacked out so that the newly-hatched sea turtles, upon leaving their nests, are not lured onshore by false light but find their right paths into the water.

When you examine the night sky map of the United States and consider where most of the population lies, it’s not hard to believe, as Bogard tells us, that more than 80% of Americans can no longer see the Milky Way from their home. I live in the suburbs of a large city, for example, and my location on a map of light pollution is nearly bright white.

Recently, I spent some time about three hours west of Chicago in a quiet patch of countryside that is a rare blue shade of darkness on light pollution maps. When I stepped out onto the deck on a crystal-clear evening, I looked up at the stars and was immediately lost.

I’ve been observing and writing about the night sky for two decades, but my familiarity with the sky is linked to recognizing what I see nightly above me, which is usually a dim cousin to the depth and wonder of a truly dark sky. None of the conventional patterns were popping out at me like I was used to: the Big Dipper, the Summer Triangle, the V-shape of Taurus’s head. Instead, a brilliant orange Mars was bright enough to wash out the stars around it, yet the lush Milky Way held her own and a thousand normally unseen stars twinkled in a chorus.

For the first time ever, I witnessed the fuzzy oval glow of the Andromeda Galaxy with nothing more than my eyes. I saw star clusters dig out patches of sky and anchor their surroundings instead of having to hunt them down with binoculars. Cassiopeia and Perseus were nearly swallowed up by the sea of stars flowing from the Milky Way behind them.

We need darkness for moments like that. We need darkness to feed our spirit, protect our health and protect the health of our planet. Light at night may be a sign of life on Earth, but the darkness will proclaim our true intelligence.

Bottom line: A video on why we need darkness from Paul Bogard, author of the book “The End of Night.” The video explains why light pollution is detrimental and why darkness is good for our bodies, our world and our spirits.