Posted by Deborah Byrd in Astronomy Essentials | Space | May 6, 2013

Those in the Australian outback and parts of the Pacific Ocean will be able to view an annular solar eclipse. Elsewhere … a partial eclipse.

Those in the Australian outback and parts of the Pacific Ocean will be able to view an annular eclipse of the sun – what some are calling a ring of fire eclipse – in which a ring of the sun’s surface appears around the body of the moon’s silhouette. The eclipse will take place on the morning of May 10, 2013 at shortly after 8 a.m. local time. Elsewhere, it’ll be May 9. About 95% of the solar disk will be covered, and yet this is considered a partial eclipse. At no time will the sky darken, or stars pop into view. The remaining 5% of sun is so bright that those in the right place on Earth to see the eclipse will need to look at it through specially filtered glasses for the entire event. View the illustrations or click the links below to learn more about the May 10, 2013 annular solar eclipse.

If you’re in Australia, eclipse happens after sunrise May 10. If you’re there, click here.

How can I watch the May 9-10 solar eclipse safely … or online? 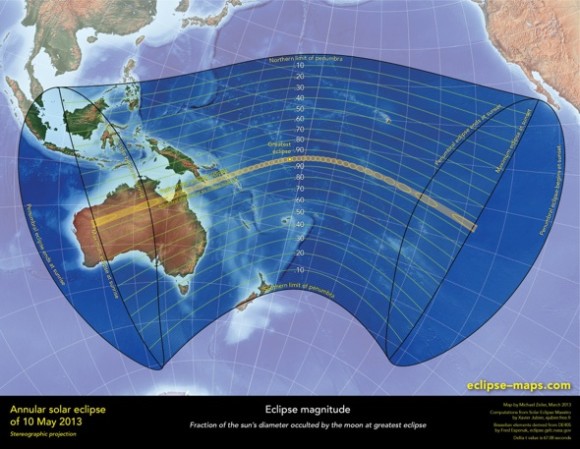 Why do they call it a ring of fire eclipse?

The May 10 annular eclipse as seen in Australia.

The May 10 annular eclipse as seen in the Pacific.

The rest of Australia will see a partial solar eclipse.

Hawaii and west coast of Baja California will see the partial eclipse, too.

Special equipment is needed to watch the eclipse.

When is the next solar eclipse?

Why do they call it a ring of fire eclipse? This is an annular eclipse of the sun, not a total eclipse. In other words, at mid-eclipse, the moon is too far away in its orbit to cover the sun completely. At mid-eclipse, instead of the moon blotting the sun from view, people equipped with special filters to protect their eyes will see the fiery outer surface of the sun in a ring around the silhouetted moon.

The May 10 annular eclipse as seen in Australia. The annular phase will start in extreme northwest Australia in the state of Western Australia, where some veteran eclipse chasers will try to see it at sunrise. The 300-km-wide path will include Tennant Creek, about 500 km north of Alice Springs in the Northern Territory. The path of annularity will leave the Australian continent well north of Cairns, where tens of thousands of people saw a total solar eclipse in November, and even north of Cooktown; Cliff Island and Flinders Group National Parks will be in the zone. Annularity will last about 3 minutes at Tennant Creek and about 4-1/2 minutes at the centerline, about 50 km north of Tennant Creek. The path of annularity will leave Queensland with about 4-3/4 minutes of annularity.

The May 10 annular eclipse as seen in the Pacific. While traversing the Pacific, the path of annularity will include the Hula peninsula of Papua New Guinea, where Pasachoff saw the 1984 total solar eclipse, and the northwestern Solomon Islands. The peak duration of the eclipse will be slightly east of the Tarawa (Kiribati) islands, with about 6 minutes of annularity.

The rest of Australia will see a partial eclipse. Weather permitting, everyone in Australia, except for the western third of Western Australia, would be able to see a partial eclipse. The Sun’s diameter will be 36% covered in Melbourne at about 8:50 a.m. local time, 38% covered in Canberra, 39% covered in Sydney at about 8:55 a.m. local time, and 52% covered in Brisbane. Partial phases will also be visible in the southern Philippines, in eastern Indonesia, in Papua New Guinea, and in the northeastern part of New Zealand’s south island and all of its north island, though with only 8% coverage in Auckland.

Special equipment is needed to watch the eclipse. During the partial phases or annularity, the remaining solar disk is too bright to look at safely, unless you are looking through specially filtered glasses that knock out 99.999% of the sunlight. Accidental projection of a partly eclipsed Sun should be visible on pavement or building walls in what is known as pinhole projection, with the small hole usually formed from small spaces between the leaves of trees. Binoculars can be used safely only if they are used to project an image down on the ground or across on a wall, given the low angle of the Sun; it is hazardous to look at the Sun through binoculars unless they are properly filtered.

Much of the information in this post was provided by Williams College in Williamtown, MA. 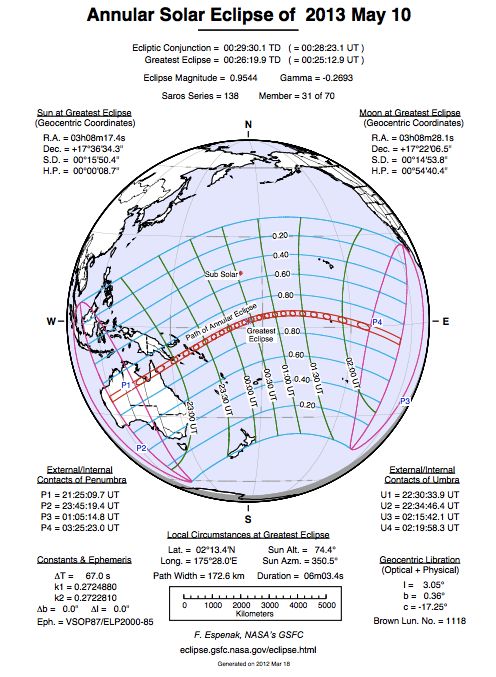 Details of annular eclipse of May 10, 2013 via Fred Espenak.

Bottom line: There will be an annular eclipse of the sun on May 10, 2013. Those watching will need special glasses to block the sun’s blinding light.