Ring of fire eclipse on Sunday 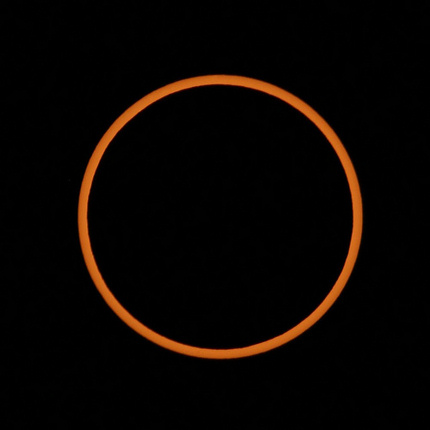 The next new moon will fall on February 26, 2017, to usher in the first of two solar eclipses in 2017. It will be an annular eclipse, nowadays often called a ring of fire eclipse. During an annular eclipse, the outer edge of the sun appears as a thin ring (annulus) of sunshine around the moon. An annular eclipse is, essentially, a special type of partial eclipse. At no time will the sky grow dark, and you’ll need continual eye protection to watch it, assuming you’re in a place on Earth where the eclipse is visible. The February 26 eclipse will be visible from Earth’s Southern Hemisphere, mainly over the Atlantic and Pacific Oceans.

Also see the map and animation below.

The year’s second solar eclipse will take place on August 21, exactly six lunar or synodic months (new moons) after the solar eclipse on February 26. This six-month eclipse cycle is called the semester.

Some people claim that the changing distance of the moon from Earth has no real visual impact in our sky. Obviously, that’s not true when it comes to an annular (ring of fire) eclipse versus a total solar eclipse.

Remember to use eye protection if you’re in a position to watch this eclipse! Click here to know if and when this eclipse takes place from your part of the world in local time.

Bottom line: The February 26, 2017 annular solar eclipse – aka a ring of fire eclipse – will be visible from parts of Earth’s Southern Hemisphere. The eclipse path is mainly over the Atlantic and Pacific Oceans, also Chile, Argentina, Angola, Zambia, Democratic Republic of the Congo. A partial solar eclipse will be visible from a much larger swath of South America and Africa, plus Antarctica.

Thank you! Your submission has been received!
Oops! Something went wrong while submitting the form.
END_OF_DOCUMENT_TOKEN_TO_BE_REPLACED