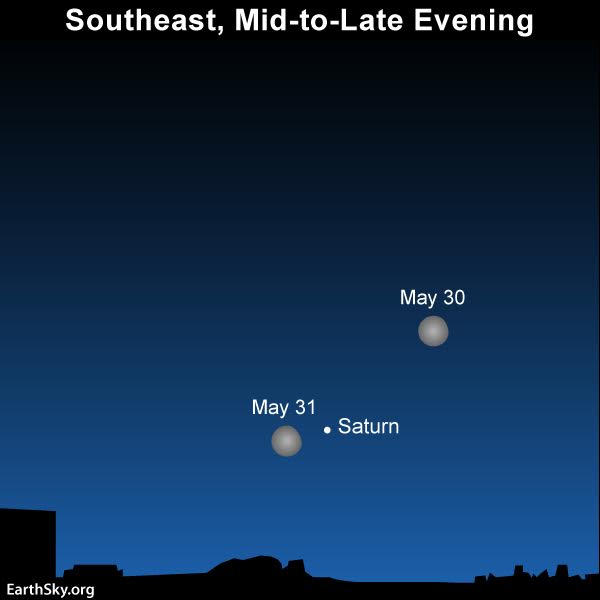 Just don’t mistake Jupiter for Saturn. It’s already up in the east at sunset, much brighter than the ringed planet.

And there’s an even brighter object in your western sky after sunset. It’s Venus, the brightest of all the planets. Jupiter will lead the moon and Saturn into the sky on each of these nights (May 30 and 31). Meanwhile, around the time Venus sets for the night, you can look in the opposite direction to view the moon and Saturn coming up below Jupiter.

In other words, in late May 2018 – as viewed from around the world – Venus sets in the northwest at roughly the same time that Saturn rises in the southeast. In fact, if you have an absolutely clear horizon, you might briefly see Saturn opposite Venus in the sky, just before Venus sets.

Saturn is rising earlier daily, while Venus is setting later daily. So – if you can’t see the two together in the sky now – by the second week or so in June 2018, there’s a good chance that you’ll see Saturn opposite Venus at nightfall.

On June 27, 2018, Earth will be flying more or less between Saturn and the sun. Saturn will appear opposite the sun in our sky, at what astronomers call opposition. At opposition, Saturn will rise around sunset and set around sunrise. It’ll be visible from dusk until dawn.

Even at opposition, Saturn never gets very close to Earth. It is, after all, the most distant major planet we can see easily with the unaided eye.

What’s more, this year presents an unusually distant opposition of Saturn. This year’s opposition finds Saturn at 9 astronomical units (AU) from Earth; that’s 9 times the Earth-sun distance. It’ll be 10 AU from the sun, in other words.

Thank you! Your submission has been received!
Oops! Something went wrong while submitting the form.
END_OF_DOCUMENT_TOKEN_TO_BE_REPLACED