Tonight, look outside in the evening and learn a phrase useful to sky watchers: follow the arc to Arcturus, and drive a spike (or speed on) to Spica.

First locate the Big Dipper asterism in the northeastern sky. Then draw an imaginary line following the curve in the Dipper’s handle until you come to a bright orange star. This star is Arcturus in the constellation Boötes, known in skylore as the bear guard.

Arcturus is a giant star with an estimated distance of 37 light-years. It’s special because it’s not moving with the general stream of stars, in the flat disk of the Milky Way galaxy. Instead, Arcturus is cutting perpendicularly through the galaxy’s disk at a tremendous rate of speed … some 100 miles (150 km) per second. Millions of years from now this star will be lost from the view of any future inhabitants of Earth, or at least those who are earthbound and looking with the eye alone.

Now drive a spike or, as some say, speed on to Spica in the constellation Virgo.

Spica in the constellation Virgo looks like one star, but this single point of light is really a multiple star system – with two hot stars orbiting very close together – located an estimated distance of 262 light-years away from Earth. 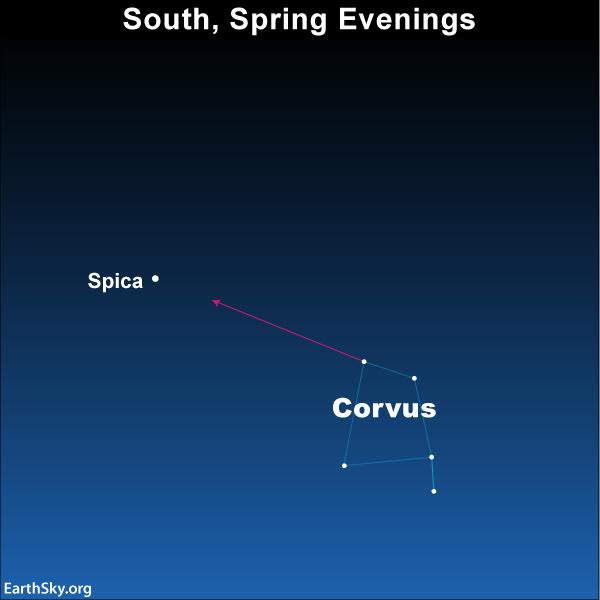 Here’s another way to verify that you’re looking at Spica, the brightest star in the constellation Virgo.

Bottom line: Follow the arc to Arcturus, and drive a spike to Spica.