The perilous process of star birth

It isn’t a supernova or dying star. It’s an explosion during star birth and provides insights into the sometimes-fierce relationship among sibling stars. 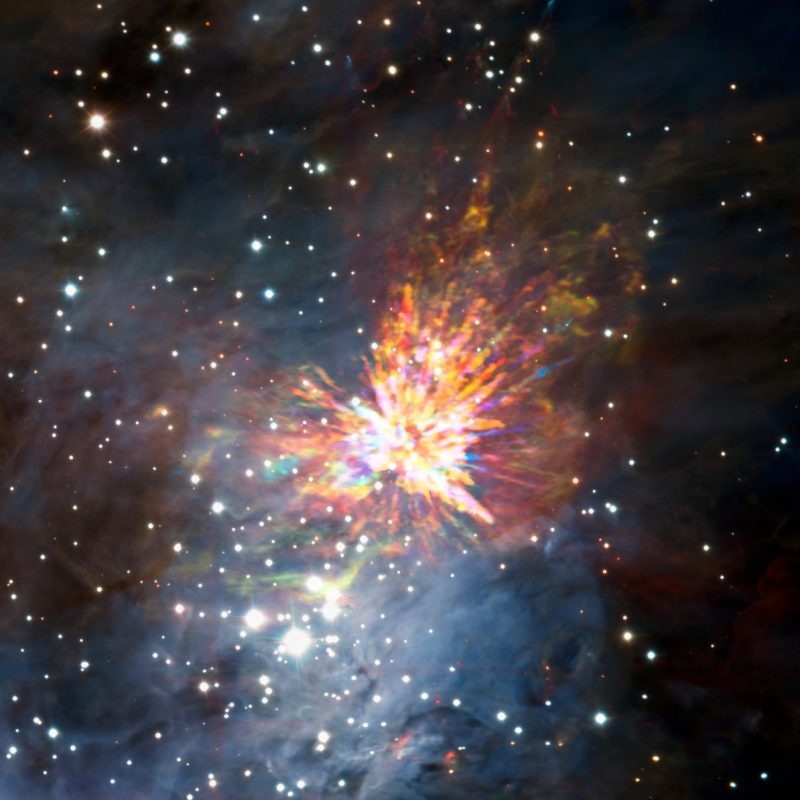 This image shows shock waves produced by an explosion that happened when several young stars were ejected from the Orion Molecular Cloud – a known birthplace of stars – about 500 years ago. The colors represent a relative Doppler shifting of the millimeter-wavelength light emitted by carbon monoxide gas. Composite image via ALMA (ESO/NAOJ/NRAO)/ Gemini South/ J. Bally/H. Drass et al.

One of the most famous stellar nurseries in our galaxy can be seen by astronomers in the direction to the constellation Orion the Hunter. There, within an enormous cloud of interstellar gas and dust, stars are being born, ultimately getting dense enough and hot enough inside to spark thermonuclear fusion, the process by which stars shine. It’s been known for a long time that star death can be an explosive process, and that supernovae, or gigantic star explosions, are associated with the death of stars. But, as the image above shows, star birth can unleash violent and explosive events, too. This image was released on April 7, 2017. It’s from the ALMA telescope in Chile. The National Radio Astronomy Observatory explained what is represents in a statement:

Around 500 years ago, a pair of adolescent protostars had a perilously close encounter that blasted their stellar nursery apart.

Shortly after starting to form some 100,000 years ago, several protostars in the Orion Molecular Cloud 1 (OMC-1), a dense and active star factory about 1,500 light-years from Earth just behind the Orion Nebula, latched onto each other gravitationally and gradually drew closer.

Eventually, two of these stars either grazed each other or collided, triggering a powerful eruption that launched other nearby protostars and hundreds of giant streamers of dust and gas into interstellar space at speeds greater than 150 kilometers per second [about 93 miles per second]. This cataclysmic interaction released as much energy as our sun emits over the course of 10 million years.

John Bally with the University of Colorado led this research, now published in the peer-reviewed Astrophysical Journal. He said:

What we see in this once-calm stellar nursery is a cosmic version of a 4th of July fireworks display, with giant streamers rocketing off in all directions.

According to the researchers, explosions like this one are probably relatively short-lived in contrast to supernova explosions. The remnants of these explosions – like the one you see in the image above – may last only centuries. But, Bally said:

Though fleeting, protostellar explosions may be relatively common. By destroying their parent cloud, as we see in OMC-1, such explosions may also help to regulate the pace of star formation in these giant molecular clouds.

Bally and his team observed this feature previously with the Gemini South telescope in Chile. These earlier images, taken in the near infrared, reveal the remarkable structure of the streamers, which extend nearly a light-year from end to end.

Hints of the explosive nature of this outflow were first uncovered in 2009 with the Submillimeter Array in Hawaii. The new ALMA data, however, provide greater clarity. 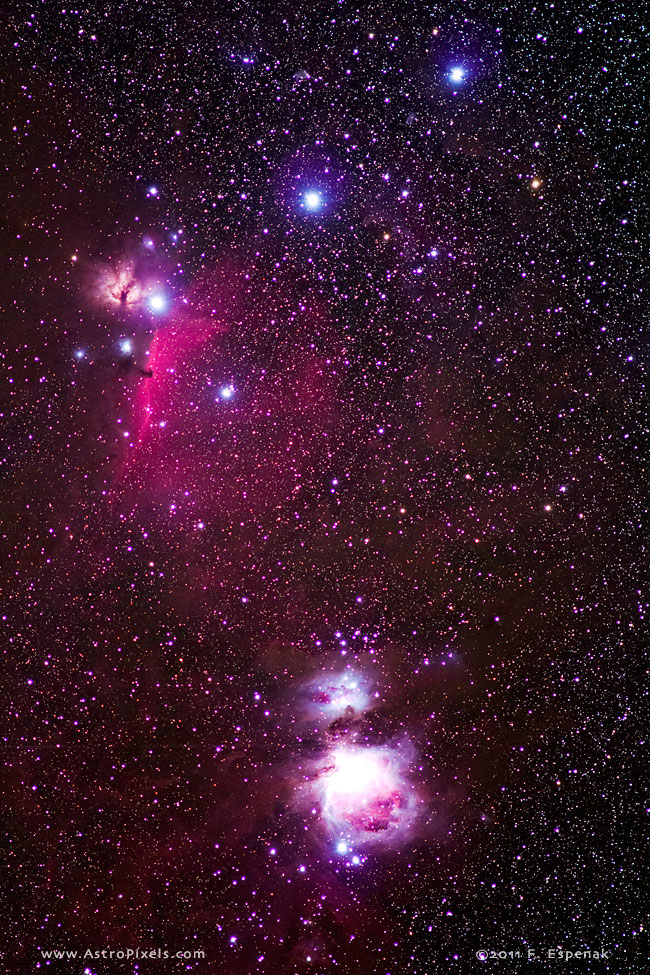 The Orion Molecular Cloud Complex is an enormous cloud of interstellar gas and dust within the Milky Way Galaxy. A major component of this cloud is seen here in the southern half of the constellation Orion. Read more about this image from Fred Espenak at AstroPixels.

Bottom line: An explosion within the Orion Molecular Cloud (OMC-1) – a known birthplace of stars in our galaxy – dramatically shows that star birth can unleash violent and explosive events.