Space artist Don Dixon captured Pluto in a painting 36 years before the New Horizons spacecraft revealed what it actually looks like. 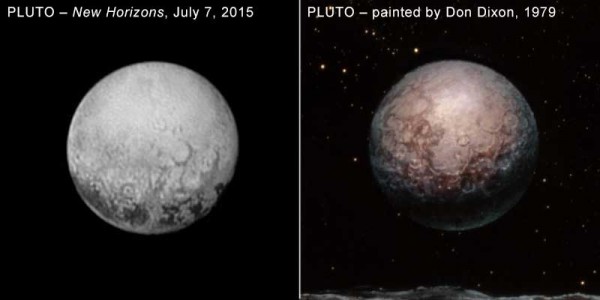 July 7, 2015 New Horizons image of Pluto compared to a 1979 painting of Pluto. Painting by Don Dixon. Used with permission.

Space artist Don Dixon posted this uncanny juxtaposition of images on his website cosmographica.com yesterday (July 13, 2015). Space artists base their work on factual information, but, in this case, Dixon did an amazing job capturing an object whose true surface would not be revealed for another 36 years. Dixon wrote on his website:

I’d like to claim prophetic powers, but the painting was guided by the reasonable assumption that Pluto likely has a periodically active atmosphere that distributes powdery exotic frosts into lowland areas. The reddish color of the higher features is caused by tholins – hydrocarbons common in the outer solar system. The partial circular arcs would be caused by flooding of craters by slushy exotic ices. Pluto is apparently more orange than I painted it, however; I assumed the exotic ices would push colors more into the whites and grays.

Thanks for letting us publish this, Don!