This week, a citizen scientist spotted a never-before-seen comet in data from the sun-observing SOHO spacecraft. It was SOHO’s 4,000th comet discovery. Learn more and watch comets sweep near the sun in this video.

The NASA/ESA Solar and Heliospheric Observatory – affectionately called SOHO – is easily history’s greatest comet discoverer. This space observatory is designed to study the sun, but it now also has 4,000 comets to its credit, with the 4,000th discovered this week. SOHO’s abundance of comet discoveries is in part thanks to the dedication of citizen scientists, who pore through its data, seeking the moving fuzzballs near the sun that turn out to be sun-grazing comets. Amateur astronomer and geophysics graduate Trygve Prestgard – originally from Norway, now in Grenoble, France – spotted the 4,000th comet in the SOHO data on June 15, 2020. NASA reported:

The comet is nicknamed SOHO-4000, pending an official designation from the Minor Planet Center.

The 3,999th and 4,000th comets discovered by the SOHO spacecraft as they sped toward the sun. The spacecraft’s coronagraph, LASCO, uses a metal disk to block out the sun itself. This obscuring disk helps the instrument focus on the sun’s outer atmosphere or corona, and it allows SOHO to find comets! Image via ESA/ NASA/ SOHO/ Karl Battams.

Like most other SOHO-discovered comets, SOHO-4000 is part of the Kreutz family of sungrazers. The Kreutz family of comets all follow the same general trajectory, one that carries them skimming through the outer atmosphere of the sun. SOHO-4000 is on the small side, with a diameter in the range of 15-30 feet [4.5 to 9 meters], and it was extremely faint and close to the sun when discovered – meaning SOHO is the only observatory that has spotted the comet, as it’s impossible to see from Earth with or without a telescope.

I feel very fortunate to have found SOHO’s 4,000th comet. Although I knew that SOHO was nearing its 4,000th comet discovery, I did not initially think that this sungrazer would be it. It was only after discussing with other SOHO comet hunters, and counting through the most recent sungrazer discoveries, that the idea sunk in. I am honored to be part of such an amazing collaborative effort.

I'm super, SUPER excited to announce that on June 15th, the @ESA/@NASASun SOHO satellite made its 4,000th comet discovery!!

Many congrats to @TrygvePrestgard for finding the 4,000th comet, and a huge THANK YOU to all the citizen scientists who have contributed to the project! pic.twitter.com/FKJrlMIoKC

Karl Battams, a space scientist at the U.S. Naval Research Lab in Washington, D.C., who works on SOHO and manages its comet-finding program, said:

SOHO’s comet-hunting prowess comes from a combination of its long lifespan, its sensitive instruments focused on the solar corona, and the tireless work of citizen scientists who scour SOHO’s data for previously-undiscovered comets, which are clumps of frozen gases, rock and dust that orbit the sun.

The vast majority of comets found in SOHO’s data are from its coronagraph instrument, called LASCO, short for Large Angle and Spectrometric Coronagraph. Like other coronagraphs, LASCO uses a solid object – in this case, a metal disk – to block out the sun’s bright face, allowing its cameras to focus on the relatively faint outer atmosphere, the corona. The corona is critical to understanding how the sun’s changes propagate out into the solar system, making LASCO a key part of SOHO’s scientific quest to understand the sun and its influence.

But focusing on this faint region also means LASCO can do something other telescopes can’t – it can see comets flying extremely close to the sun, called sungrazers, which are otherwise blotted out by the sun’s intense light and impossible to see. This is why nearly all of SOHO’s 4,000 comet discoveries have come from LASCO’s data.

SOHO orbits the sun at the Lagrangian 1 point (L1) in the Earth-sun system. It’s about a million miles from Earth, and has an uninterrupted view from its vantage point between the sun and Earth. In this animation, Earth is blue, and the sun is yellow. The green dots are the L1 to L5 points: relativity stable places to park a (moving) spacecraft. Image via Wikimedia Commons.

I have been actively involved in the Sungrazer Project for about eight years … I enjoy the feeling of discovering something previously unknown, whether this is a nice ‘real time’ comet or a ‘long-gone’ overlooked one in the archives. 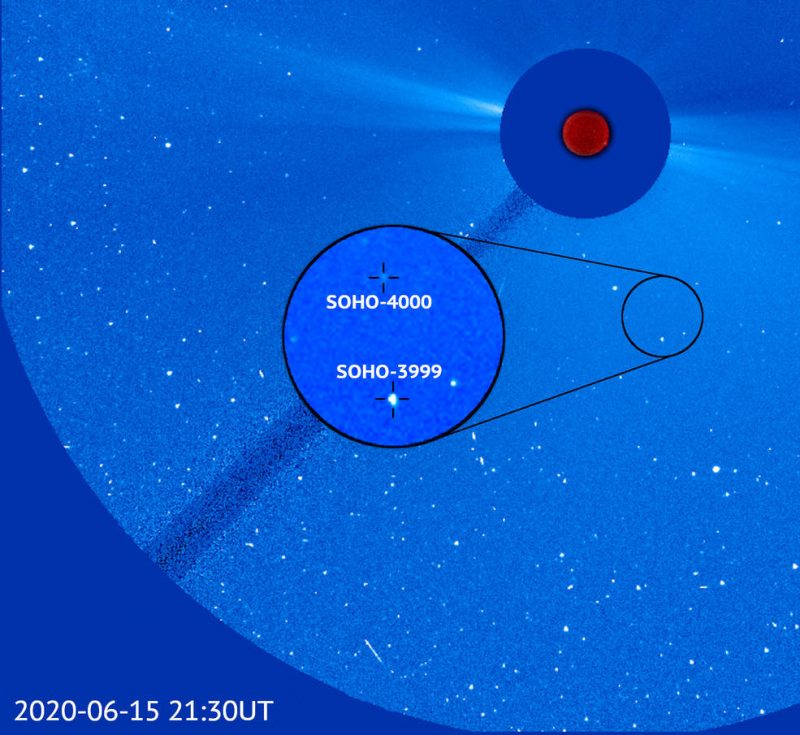 The 4,000th comet discovered by the ESA/NASA SOHO sun observatory is seen here in an image from the spacecraft. Alongside is SOHO’s 3,999th comet discovery. The 2 comets are relatively close at approximately 1 million miles apart, suggesting that they could have been connected together as recently as a few years ago. Image via ESA/ NASA/ SOHO/ Karl Battams.