A spacecraft now traveling to asteroid Bennu will retrieve an asteroid sample. Scientists equipped the OSIRIS-REx spacecraft sophisticated cameras to watch it all unfold.

Asteroid Bennu is one of some 10,000 known near-Earth asteroids. There’s a minuscule chance it’ll strike Earth late in the 22nd century, depending on how its orbit evolves. That’s one of the many reasons NASA chose this asteroid for its OSIRIS-REx sample return mission, which launched from Cape Canaveral Air Force Station on September 8, 2016. If all goes according to plan, the craft will rendezvous with Bennu in August 2018. It’ll survey the asteroid for two years before collecting dirt and pebbles from Bennu’s surface. The craft will then return to Earth and deliver its precious asteroid sample in September 2023. Since scientists can’t ride along with the craft, they’ll be, essentially, blindfolded when the sample return actually takes place. That’s why a trio of cameras has been designed to help guide and capture the scene. 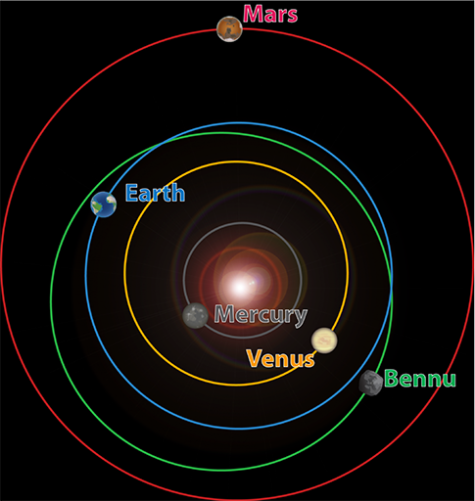 This graphic is via DSLauretta, who wrote a good post on how to get to Bennu and back.

The size of asteroid Bennu, which is 1,614 feet (about 500 meters) wide, compared with the Empire State Building and Eiffel Tower. Image via NASA.

The OSIRIS-REx Camera Suite, or OCAMS, consists of three cameras. PolyCam is a high-resolution camera that will acquire the first images of Bennu and perform an initial mapping of the asteroid. MapCam is a medium-resolution camera that will map the asteroid in color and search for satellites and dust plumes. SamCam will document the sampling process.

Scientists designed the camera suite to be functionally redundant, meaning that if one of the cameras fails during the mission, the other two cameras can stand in. Christian d’Aubigny, OCAMS deputy instrument scientist at the University of Arizona, Tucson, said:

When you have a critical mission like this, you want redundancy. The cameras have some amount of overlap in their capabilities. They’re not exact copies of each other, but if one fails, they can still get the job done.

The spacecraft will store the images captured by OCAMS and send them to the OSIRIS-REx team every few days.

Want more about the OSIRIS-REx cameras? Watch the video at the top of this page.

Want more about asteroid Bennu and the mission itself? Check the video below: 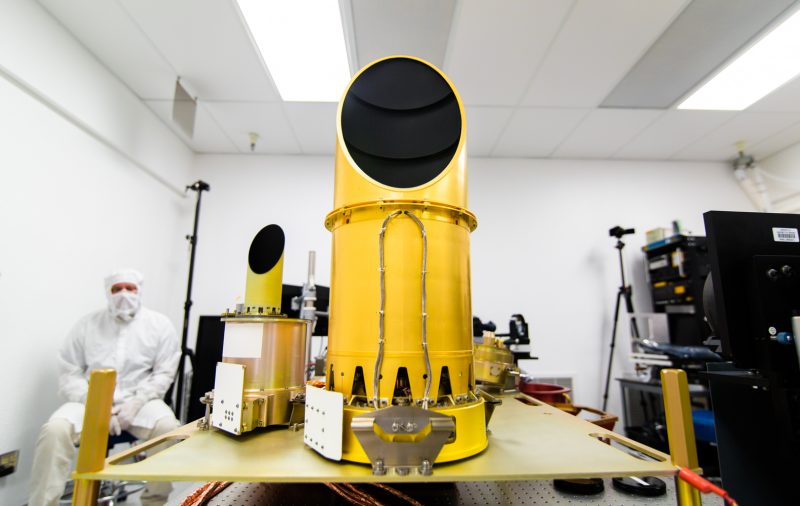 PolyCam (center), MapCam (left) and SamCam (right) make up the OSIRIS-REx Camera Suite, responsible for most of the visible light images that will be taken by the spacecraft.
Image via University of Arizona/ Symeon Platts/ NASA.

Bottom line: A spacecraft now traveling to asteroid Bennu will retrieve an asteroid sample. Videos and images on this page describe the mission’s cameras, the size of Bennu, and some basic features of the mission itself.