In one second, this distant pulsar – the spinning remains of a once-massive star – emits the same amount of energy as that released by our sun in 3.5 years. 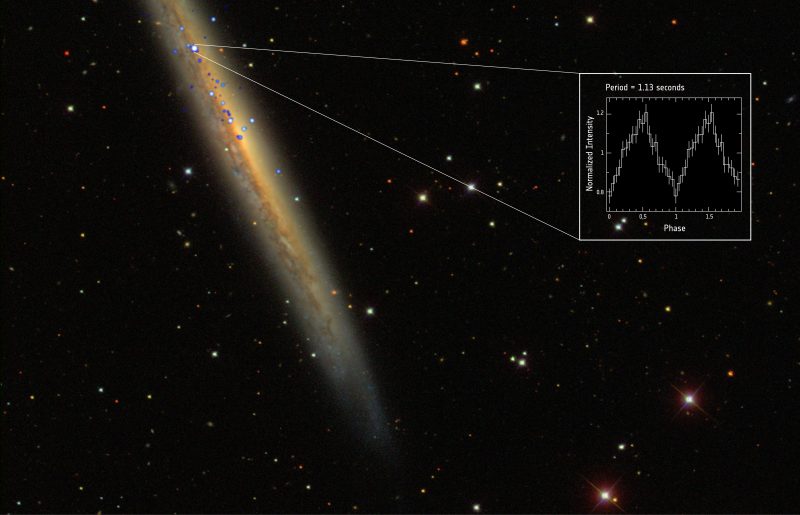 The European Space Agency (ESA) said this morning (February 21, 2017) that an object identified by its XMM-Newton space observatory turns out to be a pulsar – a rapidly spinning, extremely dense star – pulsing about once a second. This pulsar -known as NGC 5907 X-1 – appears to be a thousand times brighter than previously thought possible. If so, the pulsar is not only the brightest pulsar; it’s also the most distant pulsar of its kind ever detected, with its light traveling 50 million light-years to Earth’s vicinity.

This very bright X-ray source appears to be 10 times brighter than the previous record holder. In one second, it appears to emit the same amount of energy as that released by our sun in 3.5 years. Gian Luca Israel of INAF-Osservatorio Astronomica di Roma, Italy is lead author of the paper describing the result published in the peer-reviewed journal Science this week. He said in a statement:

Before, it was believed that only black holes at least 10 times more massive than our sun feeding off their stellar companions could achieve such extraordinary luminosities, but the rapid and regular pulsations of this source are the fingerprints of neutron stars and clearly distinguish them from black holes.

Only a neutron star is compact enough to keep itself together while rotating so fast.

ESA explained the connection between pulsars and neutron stars this way:

Pulsars are spinning, magnetized neutron stars that sweep regular pulses of radiation in two symmetrical beams across the cosmos. If suitably aligned with Earth these beams are like a lighthouse beacon appearing to flash on and off as it rotates. They were once massive stars that exploded as a powerful supernova at the end of their natural life, before becoming small and extraordinarily dense stellar corpses.

ESA explained that its XMM-Newton has observed this object several times in the past 13 years, and that the discovery it is a pulsar was the result of a systematic search for pulsars in the data archive. The signal was also identified in NASA’s Nustar archive data, providing additional information. The archival data revealed that the pulsar’s spin rate has changed over time, from 1.43 seconds per rotation in 2003 to 1.13 seconds in 2014. The same relative acceleration in Earth’s rotation would shorten a day by five hours in the same time span. ESA said:

Although it is not unusual for the rotation rate of a neutron star to change, the high rate of change in this case is likely linked to the object rapidly consuming mass from a companion.

If that’s so, Luca said:

This object is really challenging our current understanding of the ‘accretion’ process for high-luminosity stars. It is 1,000 times more luminous than the maximum thought possible for an accreting neutron star, so something else is needed in our models in order to account for the enormous amount of energy released by the object.

The scientists think there must be a strong, complex magnetic field close to the star’s surface. In that scenario, accretion onto the neutron star surface would still be possible, while the pulsar continues to generate its high luminosity. 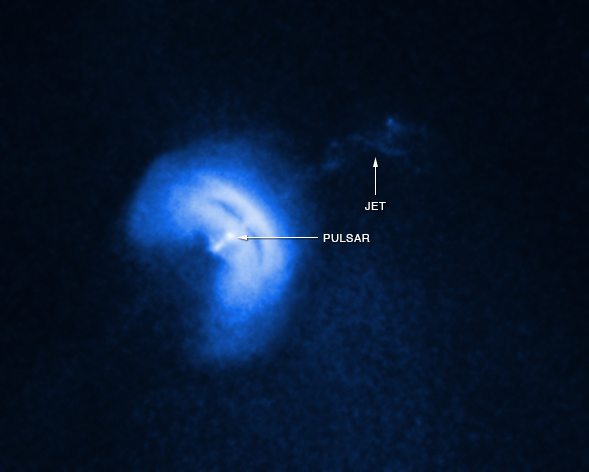 The jets that spring from pulsars and create their powerful pulses aren’t just theoretical; they’ve been observed. This deep image from NASA’s Chandra X-ray Observatory shows the Vela pulsar, about 1,000 light years from Earth, with a fast-moving jet of particles produced by the pulsar visible on the right. This pulsar makes about 11 rotations every second. As the pulsar spins, it spews out a jet of charged particles that race out along the pulsar’s rotation axis at about 70% of the speed of light. It’s when pulsar jets are aligned toward Earth that we see the powerful pulses of a pulsar. Image via Chandra.

Bottom line: The pulsar known as NGC 5907 X-1 is not only the brightest pulsar; it is also the most distant pulsar of its kind ever detected, with its light traveling 50 million light-years to Earth’s vicinity.