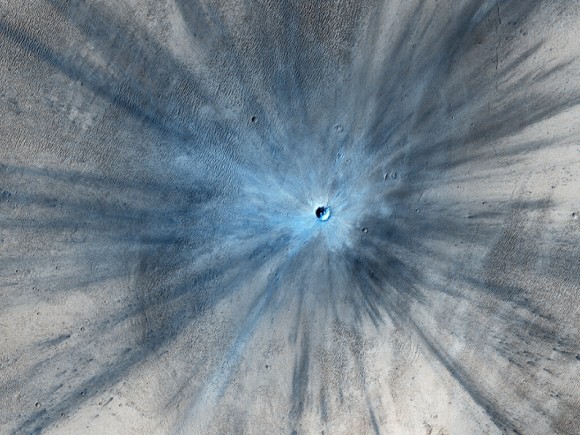 This photo of a new crater on Mars was captured by the powerful HiRISE camera on NASA’s Mars Reconnaissance Orbiter (MRO) on November 19, 2013. NASA released the image yesterday (February 5). Researchers know the feature formed sometime between July 2010 and May 2012, because other MRO observations show big changes in the area between those two dates. Space rocks hitting Mars excavate fresh craters at a pace of more than 200 per year.

The crater spans approximately 100 feet (30 meters) in diameter and is surrounded by a large, rayed blast zone. Because the terrain where the crater formed is dusty, the fresh crater appears blue in the enhanced color of the image, due to removal of the reddish dust in that area.