How do planets form after star death?

Supernova explosions destroy pre-existing planets. Yet astronomers observe planets orbiting tiny, dense, essentially dead neutron stars left behind by supernovae. How do the planets get there? 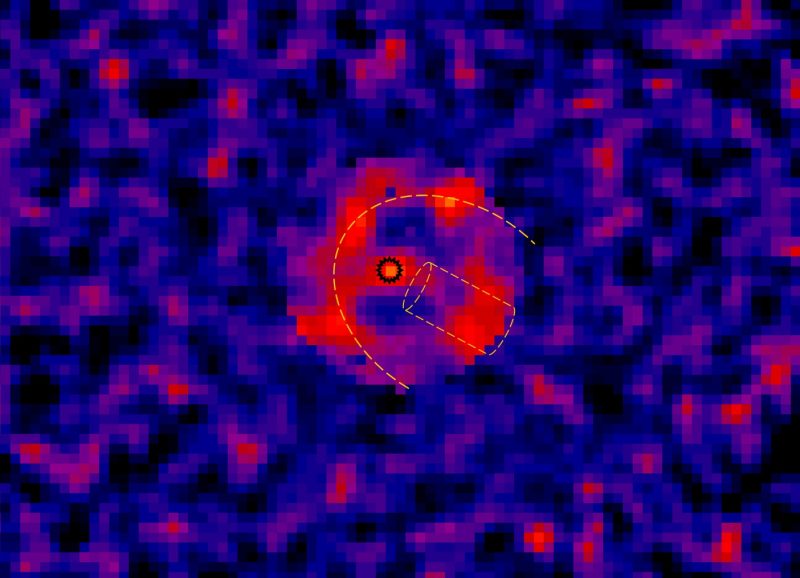 Astronomers studied the Geminga pulsar (inside the black circle), seen here moving towards the upper left. The orange dashed arc and cylinder show a ‘bow-wave’ and a ‘wake’ which might be key to after-death planet formation. The region shown is 1.3 light-years across. Image via Jane Greaves / JCMT / EAO/ RAS.

The Royal Astronomical Society’s National Astronomy Meeting is going on this week (July 2-6, 2017) in Yorkshire, England. One interesting presentation comes from astronomers Jane Greaves and Wayne Holland, who believe they’ve found an answer to the 25-year-old mystery of how planets form around neutron stars, essentially dead stars left behind by supernova explosions. These astronomers studied the Geminga pulsar, thought to be a neutron star left by a supernova some 300,000 years ago. This object is known to be moving incredibly fast through our galaxy, and the astronomers have observed a bow-wave, shown in the image above, that might be crucial to forming after-death planets.

We know our own sun and Earth contain elements forged inside stars, so we know they’re at least second-generation objects, made from dust and gas released to space by supernovae. This is the normal – call it healthy, if you will – process of star formation.

But that’s not what these astronomers studied. Instead, they looked at the extreme environment around a neutron star – the sort of star we typically observe as a pulsar – a super-dense star remnant, left behind by a supernova.

The first-ever confirmed detection of extrasolar planets – or planets orbiting distant suns – came in 1992, when astronomers found several terrestrial-mass planets orbiting the pulsar PSR B1257+12. Since then they’ve learned that planets orbiting neutron stars are incredibly rare; at least, few have been found.

Thus astronomers have puzzled over where neutron star planets come from. Greaves’ and Holland’s statement said:

The supernova explosion should destroy any pre-existing planets, and so the neutron star needs to capture more raw materials to form its new companions. These after-death planets can be detected because their gravitational pull alters the times of arrival of radio pulses from the neutron star, or ‘pulsar’, that otherwise pass us by extremely regularly.

Greaves and Holland believe they’ve found a way for this to happen. Greaves said:

We started looking for the raw materials soon after the pulsar planets were announced. We had one target, the Geminga pulsar located 800 light-years away in direction of the constellation Gemini. Astronomers thought they’d found a planet there in 1997, but later discounted it because of glitches in the timing. So it was much later when I went through our sparse data and tried to make an image.

The two scientists observed Geminga using the James Clerk Maxwell Telescope (JCMT) near the summit of Mauna Kea in Hawaii. The light the astronomers detected has a wavelength of about half a millimeter, is invisible to the human eye, and struggles to get through the Earth’s atmosphere. They used a special camera system called SCUBA and said:

What we saw was very faint. To be sure, we went back to it in 2013 with the new camera our Edinburgh-based team had built, SCUBA-2, which we also put on JCMT. Combining the two sets of data helped to ensure we weren’t just seeing some faint artifacts.

Both images showed a signal towards the pulsar, plus an arc around it. Greaves said:

This seems to be like a bow-wave. Geminga is moving incredibly fast through our galaxy, much faster than the speed of sound in interstellar gas. We think material gets caught up in the bow-wave, and then some solid particles drift in towards the pulsar.

Her calculations suggest that this trapped interstellar ‘grit’ adds up to at least a few times the mass of the Earth. So the raw materials could be enough to make future planets. However, Greaves cautioned that more data is needed to tackle the puzzle of planets orbiting neutron stars:

Our image is quite fuzzy, so we’ve applied for time on the international Atacama Large Millimetre Array – ALMA – to get more detail. We’re certainly hoping to see this space-grit orbiting nicely around the pulsar, rather than some distant blob of galactic background!

If ALMA data confirm their new model for Geminga, the team hopes to explore some similar pulsar systems, and contribute to testing ideas of planet formation by seeing it happen in exotic environments. Their statement said:

This will add weight to the idea that planet birth is commonplace in the universe.

Bottom line: Astronomers have observed a bow-wave around an object in our galaxy called Geminga – thought to be a neutron star and pulsar. They believe the bow wave might be crucial to forming “after-death planets,” that is, planets orbiting neutron stars.