Astronomers have found fast-moving wave-like features – ripples – in the dusty disk surrounding a young star. Nothing like this was ever observed or predicted. 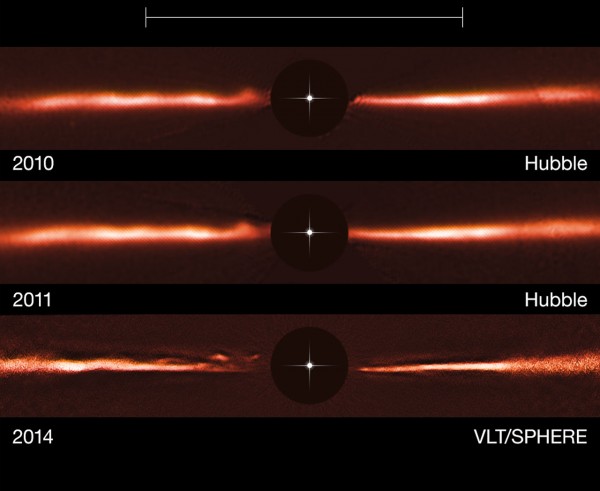 The black central circles in this composite image show where the light of the star AU Microscopii has been blocked off to reveal a much-fainter disk surrounding the star. Astronomers this week announced unexpected, fast-moving, wave-like features in this dusty disk. Scale bar at top indicates diameter of Neptune’s orbit in our solar system (60 times the Earth-sun distance). Image via ESO.

Astronomers felt certain for decades that stars arise in vast, spinning clouds of gas and dust in interstellar space. More recently, although they’re less sure of the details, they’ve become confident that stars also create their own solar systems – systems of planets and moons, asteroids and comets – in the flattened dusty disks surrounding newly born stars. And of course astronomers are people who are inherently curious; they love a mystery. So it’s with excitement that astronomers this week announced a wholly new and unsuspected process happening in the disk surrounding a nearby young star. They’ve found ripples racing across the disk at speeds of up to about 25,000 miles (40,000 km) per hour! The results are published in the journal Nature on 8 October 8, 2015.

The star is called AU Microscopii, and it’s only 32.3 light-years away, which is very nearby on the scale of our Milky Way galaxy. The star is visible in Earth’s sky, from the Southern Hemisphere. Its large debris disk, known since 2003, faces Earth edge-on. Astronomers have been keen to study this disk, for the valuable clues it could provide about how new solar systems are born.

But no one had predicted anything like these ripples.

An international team of astronomers had been searching AU Mic’s disc for any signs of clumpy or warped features. Such signs sometimes give away the location of possible planets. In 2014, they began using the very powerful high-contrast imaging capabilities of the European Southern Observatory’s newly installed SPHERE instrument, mounted on its Very Large Telescope in Chile. French astronomer Anthony Boccaletti, lead author on the paper, said:

The images from SPHERE show(ed) a set of unexplained features in the disk which have an arch-like, or wave-like, structure, unlike anything that has ever been observed before.

Five wave-like arches at different distances from the star showed up in the new images, which the astronomers said were:

…reminiscent of ripples in water.

After spotting the features in the SPHERE data the team then turned to earlier images of the disk taken by the Hubble Space Telescope in 2010 and 2011. They wanted to see whether the features were also visible there.

And so they were. That’s when the astronomers learned that the wave-like features observed in AU Mic’s disk had changed over time. The ripples are moving — and very fast!

Strangely, the wave-like features farther away from the central star seem to be moving faster than those closer to it. At least three of the features are moving so fast that they could well be escaping from the gravitational attraction of the star.

The astronomers say these high speeds rule out the possibility that the observed ripples are conventional disk features caused by objects — like planets — disturbing material in the disk while orbiting the star.

They say there must have been something else involved to speed up the ripples and make them move so quickly, meaning that they are a sign of something truly unusual. Co-author Glenn Schneider of Steward Observatory in Arizona said:

One explanation for the strange structure links them to the star’s flares. AU Mic is a star with high flaring activity — it often lets off huge and sudden bursts of energy from on or near its surface.

One of these flares could perhaps have triggered something on one of the planets — if there are planets — like a violent stripping of material which could now be propagating through the disk, propelled by the flare’s force.

But that’s just one possibility. As yet, the team cannot say for sure what is causing these mysterious ripples around the star. 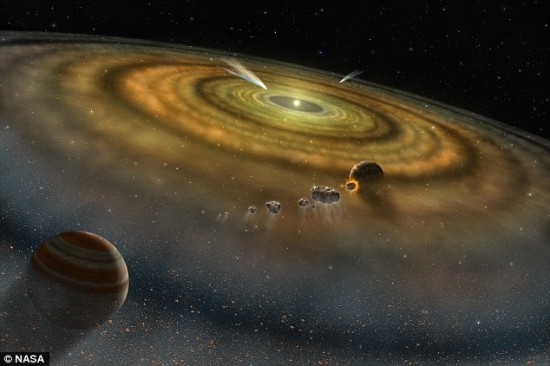 Artist’s concept of a planet-forming disk around a young star, via NASA.

Bottom line: Astronomers have found mysterious ripples in the dusty, planet-forming disk surrounding the nearby star AU Microscopium. Nothing like this was ever observed or predicted.