Loneliest known exoplanet and its star

The exoplanet labeled 2MASS J2126 has the widest orbit of any planet ever found. Its “year” is nearly 1 million Earth-years long. 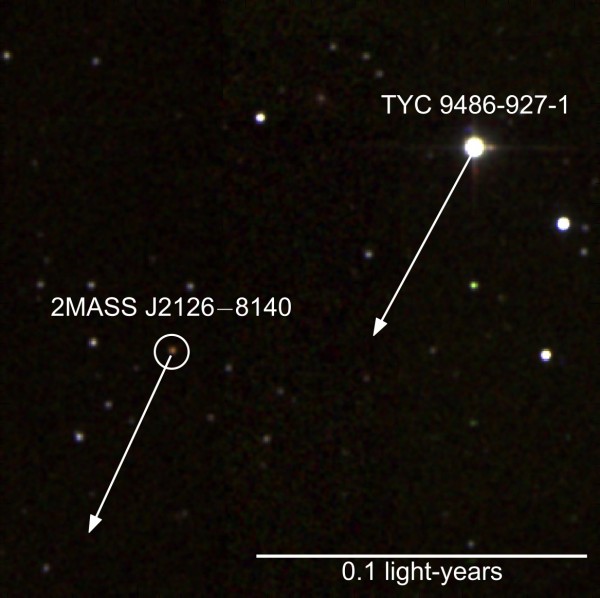 View larger. | The planet lies a whopping 1 trillion kilometers (0.6 trillion miles) from its star, or about 7,000 times the Earth-sun distance.

The planets in our solar system orbit our sun, and most known exoplanets orbit distant stars. But, in the past several years, astronomers have located some exoplanets thought to be adrift in space. That was the case with the exoplanet labeled 2MASS J2126. It was thought to be a free floating, or lonely, planet. This week (January 25, 2016), a team of astronomers in the UK, USA and Australia announced that this planet is actually in a gigantic orbit around its star.

In this huge orbit, it’s still pretty lonely. The planet lies a whopping 1 trillion kilometers (0.6 trillion miles) from its star. At this distance from its star, the planet is about 7,000 times the distance between our sun and Earth.

Its huge orbit makes its “year” nearly 1 million Earth-years long (roughly 900,000 years). And that means has completed fewer than 50 orbits over its lifetime.

The astronomers said in a statement:

There’s little prospect of any life on an exotic world like this, but any inhabitants would see their ‘sun’ as no more than a bright star, and might not even imagine they were connected to it at all.

The researchers report the discovery this week in a paper in Monthly Notices of the Royal Astronomical Society.

Astronomer Niall Deacon of the University of Hertfordshire has spent the last few years searching for young stars with companions in wide orbits. As part of the work, his team looked through lists of known young stars, brown dwarfs and free-floating planets to see if any of them could be related. They found 2MASS J2126 moving through space with a star called TYC 9486-927-1.

Both about 104 light-years from our sun, and so it made sense that they are associated. Deacon commented that both members of this system – the widest planet system found so far – has been known for eight years. But, he said:

… Nobody had made the link between the objects before.

The planet is not quite as lonely as we first thought, but it’s certainly in a very long distance relationship. 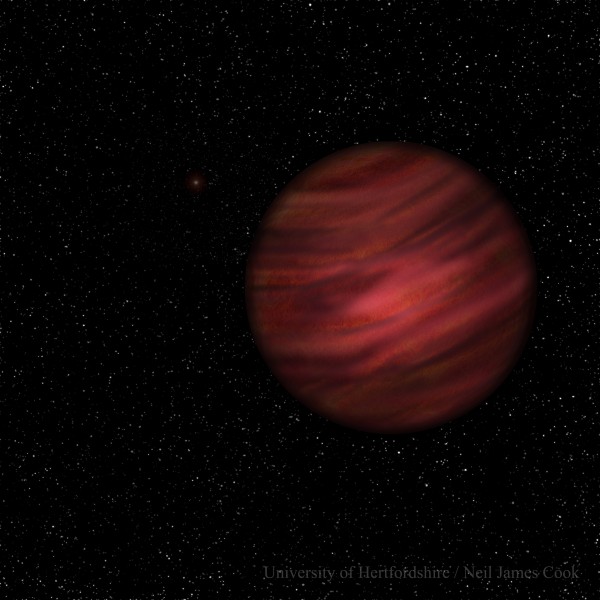 View larger. | Artist’s concept of lonely exoplanet 2MASS J2126. It’s doubtful this world is inhabited, but, if it were, the inhabitants would see their sun as no more than a bright star, and might not realize they were connected to it.

Bottom line: The exoplanet labeled 2MASS J2126 has the widest orbit of any planet so far found.

Via Royal Astronomical Society in the UK