Confirmation that Mars came out of its last ice age 400,000 years ago. Plus insights into the water cycle on Mars, a possible help to future space colonists. 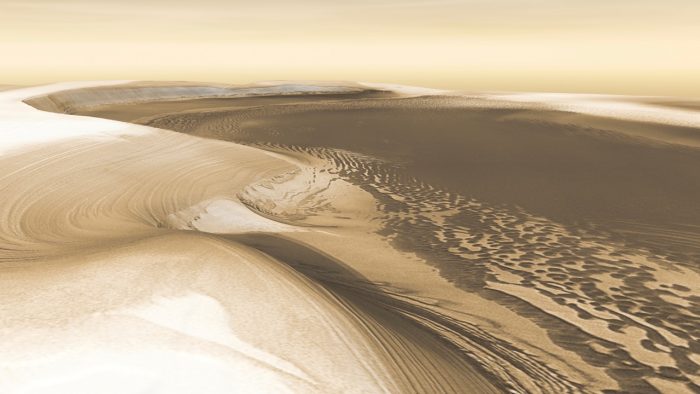 View larger. | Climatic cycles of ice and dust build the Martian polar caps, season by season, year by year, and periodically whittle down their size when the climate changes. This image is a simulated 3-D perspective view, created from image data taken by the THEMIS instrument on NASA’s Mars Odyssey spacecraft. Image via NASA/JPL/Arizona State University, R. Luk.

There were two stories in late May 2016 related to the north polar ice cap of the planet next door, Mars. First, although Earth came out of its last ice age about 10,000 years ago, scientists have confirmed that Mars emerged from its last ice age 400,000 years ago. Second, scientists studying the behavior of Mars’ polar ice cap in present time have measured the amount of ice deposited from year to year, a fact that may someday give future Mars colonists an indication of how much ice they can renewably harvest each northern summer.

A team of scientists led by Isaac Smith and Nathaniel Putzig of the Planetary Research Institute used radar data from NASA’s Mars Reconnaissance Orbiter (MRO) for the first study. They were able to identify layers of accumulation of ice at Mars’ north polar cap, where the ice can be over a mile (2 km) thick. They also noted breaks in the accumulated ice layers, marking interglacial periods, such as the one Mars is in now.

A May 26 statement from NASA said:

The new results agree with previous models that indicate a glacial period ended about 400,000 years ago, as well as predictions about how much ice would have been accumulated at the poles since then.

These results are published in the May 27, 2016 issue of the journal Science. NASA said studies like this:

… help refine models of the red planet’s past and future climate by allowing scientists to determine how ice moves between the poles and mid-latitudes, and in what volumes. 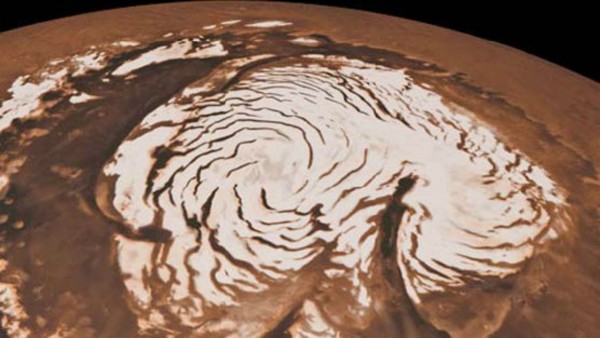 The second study came from a science team led by Adrian Brown of the SETI Institute. His group measured the seasonal changes in Mars north polar cap, and found the net amount of ice deposited each year is slightly more than the thickness of a human hair. His group’s statement said this measurement will help scientists understand how much martian water is currently active (as opposed to being permanently frozen), and Brown commented on the usefulness of this knowledge to future Mars astronauts, saying:

Just like farmers on Earth, visitors to Mars will need to know about the water cycle, how it operates seasonally, where the water comes from, and where it’s being stored now.

Brown and his team used the spectrometer known as CRISM on the Mars Reconnaissance Orbiter to monitor the infrared absorption bands of ice in Mars’ north polar cap. They tracked the movement of water ice and the nighttime snowfall events that happen during summertime in Mars’ northern hemisphere. Their May 26 statement explained:

They were able to follow the movement of water around the ice cap by identifying a latitude at which the polar cap ice goes from a ‘subliming’ state in the middle of summer (losing ice cover) to when it reverts to the ‘condensing’ stage (accumulating ice) late in the season as the sun gets lower.

Studying this pattern, they’ve worked out how much ice gets transported onto the Martian northern cap in a year.

It amounts to a thickness of 70 microns.

These results are published in the journal Icarus. 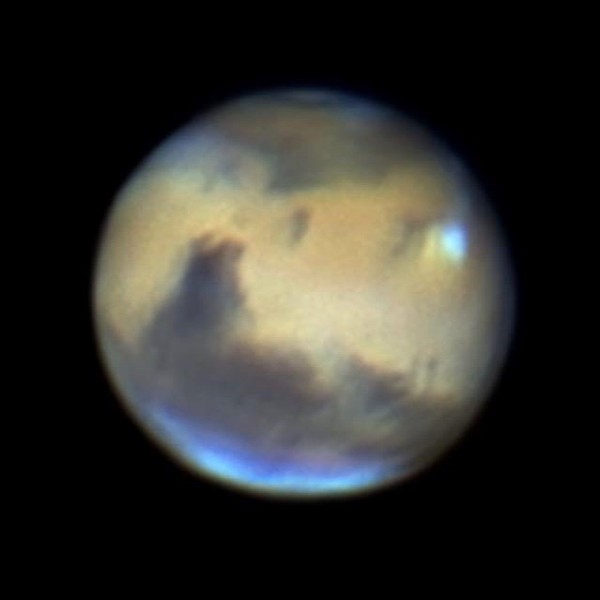 Mars at opposition – opposite Earth from the sun – on May 22, 2016 via Fernando Rodriquez in south Florida. You can see hints of the polar ice caps in photos such as this one. Thank you, Fernando!

While Mars’ polar caps were first spotted in 1666, it wasn’t until nearly two centuries later that astronomer William Herschel made the suggestion that they might be analogous to the ice caps of Earth, and a potential source of water …

In winter, the carbon dioxide at the Martian poles freezes, and every exposed surface cools down to -190 F [-123 C].

But during the summer, the polar caps thaw and occasionally get up to a balmy -100 F (37 C). Water molecules start warming up and traveling around the cap.

Whatever ice remains at the end of summer becomes a permanent part of the cap, as it will be covered in dry ice as winter sets in. This is likely how the cap built up over time, and gives future Martian colonists an indication of how much ice they can renewably harvest each northern summer.

Read more from the SETI Institute

Bottom line: Two studies in late May 2016 focused on Mars’ north polar cap. One confirmed that Mars came out of its last ice age 400,000 years ago. The second provided a measurement for the amount of ice deposited to Mars’ north polar cap each year, providing insights into the water cycle on Mars.