Human travel to another planet is a long-held dream. But, even in our own solar system, the vast distances make it a very tough dream to accomplish. The most recent NASA robot to land on Mars, the Curiosity rover, launched on November 26, 2011 and set down on Mars on August 5-6, 2012. Eight months doesn’t seem like a very long time (unless you also want to return to Earth, too). However, a spaceship carrying human astronauts would take much longer to get to Mars. To survive in space, we humans need to carry air, food and water, all of which weigh a lot and require a lot of fuel to propel (which in turns weighs a lot and requires more fuel, and so on). So going to Mars with conventional rockets – the type of rockets used to get Curiosity to Mars – would be difficult and time-consuming. That is why space enthusiasts often speak of nuclear fusion, the same energy that powers the sun and stars, as a possible attractive rocket propulsion technique. And, it seems, a fusion-powered rocket is getting closer to reality.

Last month, researchers at the University of Washington – and at MSNW, a space-propulsion company based in Redmond, Washington – presented a mission analysis for a trip to Mars. These scientists are working now to understand the technical details of a fusion-powered trip to Mars, and they’re working in the lab on the technologies needed to contain a fusion reaction as well as build other components necessary for a fusion-powered rocket. 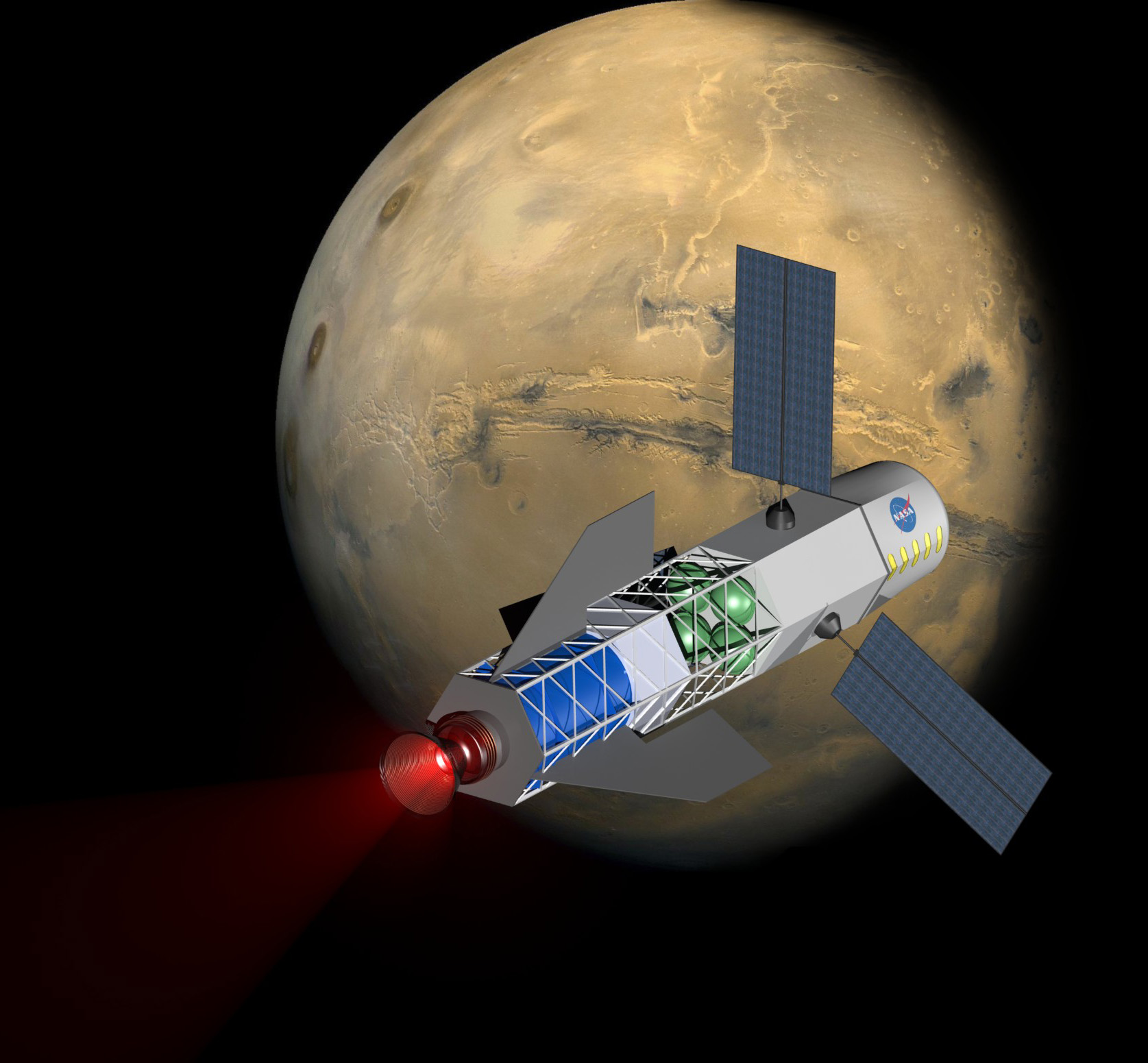 Artist’s concept of a fusion rocket to Mars. In this image, the crew would be in the forward-most chamber. Solar panels on the sides would collect energy to initiate the process that creates fusion. Image via University of Washington. View larger.

Is a fusion-powered rocket feasible? These researchers say it is. They say they’ve conducted successful lab tests of all portions of the process and that their task now is to combine these isolated test into a final experiment that produces fusion. The team said in a press release issued April 4, 2013 that it hopes to have everything ready for a first test by the end of summer 2013.

NASA estimates that a round-trip human expedition to Mars would take more than four years using current technology. The large amount of chemical rocket fuel would be expensive; launch costs alone would be more than $12 billion, NASA says. In contrast, the team in Washington has published papers calculating the potential for 30- and 90-day expeditions to Mars, using a fusion rocket.

Why are fusion rockets so difficult to build? One major problem is containing the fusion reaction. Fusion powers the stars. Can we humans contain this process?

The team in Washington state has devised a system in which a powerful magnetic field causes large metal rings to implode around a plasma, compressing it so that atoms begin to fuse (thereby creating energy). Converging rings merge to form a shell that ignites fusion, for a few microseconds. The compression time is short, but the researchers say enough energy is released to heat and ionize the surrounding shell. This super-heated, ionized metal is ejected out of the rocket nozzle at a high velocity. The process is repeated every minute or so, propelling the spacecraft.

In the video below, the plasma (purple) is injected while lithium metal rings (green) rapidly collapse around the plasma, creating fusion.

These researchers and scientists say their goal is to “clear many of the hurdles that block deep space travel, including long times in transit, exorbitant costs and health risks.” Lead researcher John Slough, a UW research associate professor of aeronautics and astronautics – and president of MSNW, a space propulsion company based in Redmond, Washington – said:

Using existing rocket fuels, it’s nearly impossible for humans to explore much beyond Earth. We are hoping to give us a much more powerful source of energy in space that could eventually lead to making interplanetary travel commonplace.

Slough’s team is funded through NASA’s Innovative Advanced Concepts Program and was awarded a second round of funding in fall 2012.