Are there geysers on Europa?

On Monday, scientists announced new evidence suggesting water vapor plumes on Jupiter’s moon Europa. Could we send a spacecraft through one, to test whether Europa’s liquid ocean – buried below its icy crust – might support life?

Space scientists announced on Monday (May 14, 2018) that a reanalysis of data collected by the Galileo spacecraft in 1997 corroborates earlier suggestions that Jupiter’s moon Europa might be venting plumes of water vapor. This is very exciting news! It might mean that a planned space mission to Europa – called the Europa Clipper – could be programmed to fly through the plumes in order to sample Europa’s liquid ocean, which is buried below this moon’s thick ice crust. The goal would be to probe the question of whether Europa’s hidden ocean has the ingredients needed to support life. As Robert Pappalardo of NASA’s Jet Propulsion Laboratory in Pasadena, California, said in the video above:

There are better tools now, better computational techniques, better computing. We can go back and look at that old data set anew.

Pappalardo is Europa Clipper‘s project scientist. But he’s not the only one thrilled by the new finding. The research was led by space physicist Xianzhe Jia at the University of Michigan in Ann Arbor. Jia also is co-investigator for two instruments that will travel aboard Europa Clipper. His new study, outlining the possibility of Europa plumes, was published May 14 in the peer-reviewed journal Nature Astronomy. 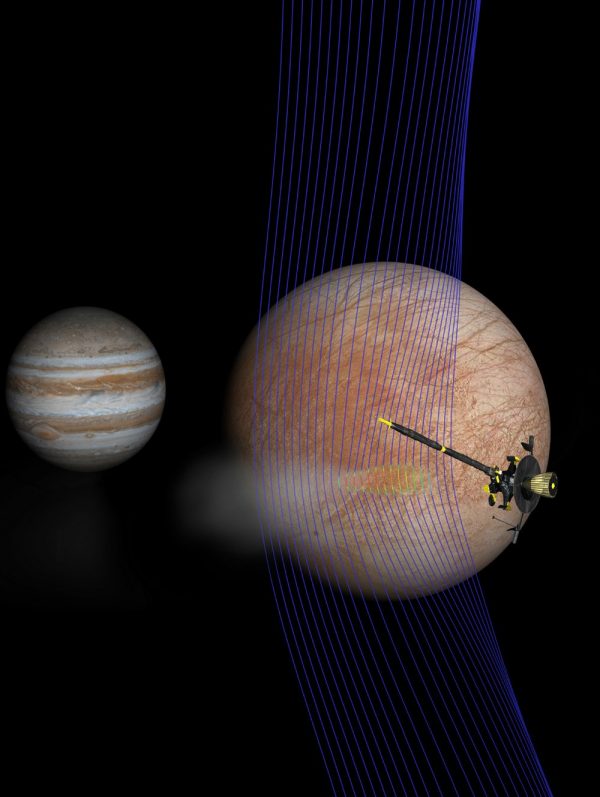 Artist’s concept of Jupiter and Europa (in the foreground) with the Galileo spacecraft after its pass through a plume erupting from Europa’s surface. Image via NASA JPL.

Jia said it was Melissa McGrath of the SETI Institute that inspired his team to dive back into the Galileo data. McGrath is part of the Europa Clipper science team, too. Jia said that in a presentation she delivered to fellow team scientists, highlighting other Hubble observations of Europa:

One of the locations she mentioned rang a bell. Galileo actually did a flyby of that location, and it was the closest one we ever had. We realized we had to go back. We needed to see whether there was anything in the data that could tell us whether or not there was a plume.

At the time of the 1997 flyby, about 124 miles (200 km) above Europa’s surface, the Galileo team didn’t suspect the spacecraft might be grazing a plume erupting from the icy moon. Now, Jia and his team believe, its path was fortuitous.

When they examined the information gathered during that flyby 21 years ago, sure enough, high-resolution magnetometer data showed something strange. Drawing on what scientists learned from exploring plumes on Saturn’s moon Enceladus — that material in plumes becomes ionized and leaves a characteristic blip in the magnetic field — they knew what to look for. And there it was on Europa — a brief, localized bend in the magnetic field that had never been explained.

Jia’s team then began to analyze the old data in earnest, feeding some of the old data into a new 3D computer model developed by his team at the University of Michigan.

The result that emerged, with a simulated plume, was a match to the Galileo data from 21 years ago. Robert Pappalardo said:

There now seem to be too many lines of evidence to dismiss plumes at Europa. This result makes the plumes seem to be much more real and, for me, is a tipping point. These are no longer uncertain blips on a faraway image.

The Europa Clipper mission may launch as early as June 2022. NASA said:

From its orbit of Jupiter, Europa Clipper will sail close by the moon in rapid, low-altitude flybys. If plumes are indeed spewing vapor from Europa’s ocean or subsurface lakes, Europa Clipper could sample the frozen liquid and dust particles. The mission team is gearing up now to look at potential orbital paths, and the new research will play into those discussions.

If plumes exist, and we can directly sample what’s coming from the interior of Europa, then we can more easily get at whether Europa has the ingredients for life.

That’s what the mission is after. That’s the big picture. 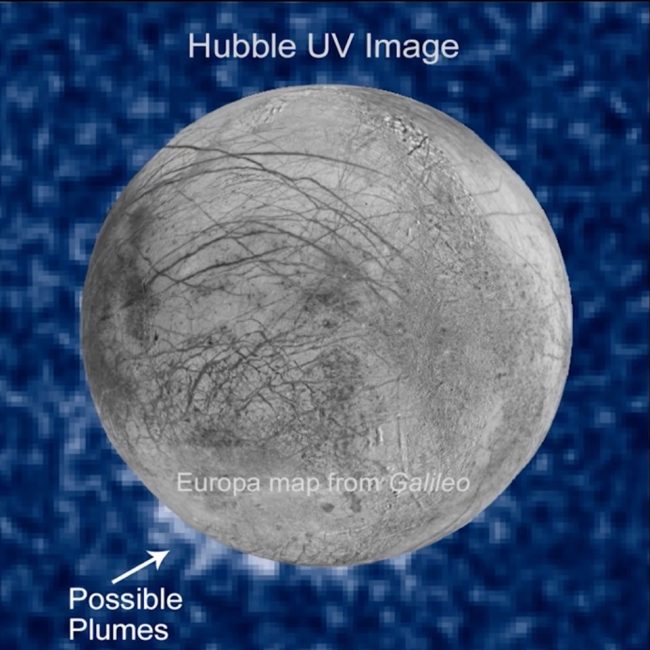 Bottom line: A reanalysis of data collected by the Galileo spacecraft in 1997 corroborates earlier suggestions that Jupiter’s moon Europa might be venting plumes of water vapor.