NASA’s Dawn mission is bound for orbit around two of the biggest bodies in the asteroid belt: Ceres and Vesta. First stop Vesta in July 2011.

Space scientist Chris Russell of University of California – Los Angeles (UCLA) is principal investigator of NASA’s Dawn mission. The mission: an orbit of both Ceres and Vesta, two of the largest objects in the asteroid belt between Mars and Jupiter. First stop will be Vesta in July 2011. This asteroid is the most geologically diverse of the large bodies in the asteroid belt. Dawn will stay in orbit around Vesta, mapping it, for one year. Then, in 2015, Dawn will head toward an orbit of Ceres – formerly the biggest asteroid, now classified as a dwarf planet. Dr. Russell spoke more about NASA’s Dawn mission with EarthSky’s Jorge Salazar.

What are the main goals of NASA’s Dawn mission?

And these two bodies you speak of are the asteroid Vesta and the dwarf planet Ceres?

Right. These are the two most massive bodies in the main belt. But they are very different objects, quite different. And that is a surprise to us, why two bodies so close together can be so different. They are the biggest ones that we can study out there. And we expect that they will give us the most information about that early period of time.

Why did scientists choose to go to Vesta and Ceres?

We’re trying to understand the building blocks of the Earth and the other terrestrial planets. We believe that small bodies formed first. And then the larger bodies were built out of the collisions and coalescing of the small bodies.

So you might think of it as, you’re building a house. You’re interested in what kinds of blocks you’re going to use to build that house. And so we view Vesta and Ceres as examples – perhaps the best examples, and the most accessible examples – of building blocks in the present-day solar system that we can go out and examine.

So we’re interested in our history, our ancestry, and what was put together to build the Earth. 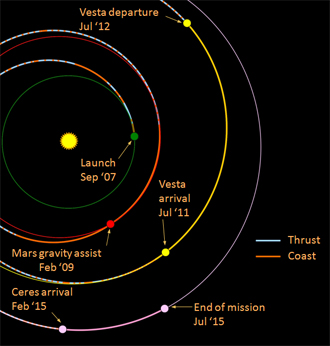 What science will the Dawn mission perform?

The first thing we want to do is to get some of those images. So we designed a mission that would orbit. We’re going out to each of these bodies and orbiting for approximately one year. We put cameras on the top of the spacecraft. We point that top of the spacecraft down at the body and just take pictures. And we thought we had designed a very simple mission, principally mapping the body.

Now with those images, not only do we see whether there’s craters, or ridges, or mountains, or old volcanoes, or lava flows, but we also measure the size of the body. And something simple, like the size and shape of the body, can be very important to us – because knowing the mass of the body, and the size, we get the density. And if we know what the density of the body is, we get a good idea of what might be inside the body, beneath the surface.

We also are very interested in the nature of the surface material. We can’t necessarily look down deep into the body, although the craters dig out holes that we can look into and examine the material in those craters.

So, basically, we’re just measuring the nature of the materials on the surface. We do that in two ways. One is that we take a look at the light reflected by the sun. And when the sun shines down on the surface, some of the sunlight is absorbed at certain frequencies. Different materials will absorb the sunlight at different wavelengths. We can look at the color, basically, of the surface, and get some idea of what it’s made of.

Another thing we have is what we call a gamma ray and neutron detector. And that instrument will tell us the elemental abundance, whether there’s iron, or magnesium, or aluminum, or some other elements in the surface. So we get an idea of the mineral composition, the types of rocks that there are, and the elements that constitute those rocks.

To sum up – by mapping the surface of asteroids Ceres and Vesta – scientists can tell the building blocks used to put them together, and that tells also of how the whole solar system was built. Correct?

Exactly. Now I mentioned that Ceres and Vesta were very different. And that is an amazing fact, because they are so different.

Now with Vesta, we’ve been able to study Vesta here on Earth for a long time, because pieces of Vesta – or parts that were knocked off of Vesta – had been falling to Earth. So when you see a meteorite come to Earth, one out of every 20 of those meteorites started off on Vesta at some point in its history. We’ve been able to look at those meteorites and analyze them. We understand the types of rocks that we’re expecting to see when we get there. We’re going to test these hypotheses, of course. But we know what we’re expecting when we get to Vesta.

Meanwhile, Ceres has not produced any meteorites that we can identify. And it’s in a nearby part of space. Why is that? One of the possible reasons is that the nature of the material on the surface of Ceres is such that it doesn’t transport very well to Earth. That if you chip some of it off, maybe it will evaporate in transit. Or maybe when it gets into the Earth’s atmosphere, it’ll break up into little dust particles and it won’t come down to the surface of the Earth as a rock.

So, one – we’ve got Vesta, a very rocky body. It looks a lot like the moon, with basalt flow, lava flow on the surface. But we also have Ceres out there with a surface that doesn’t seem to want to come to Earth. 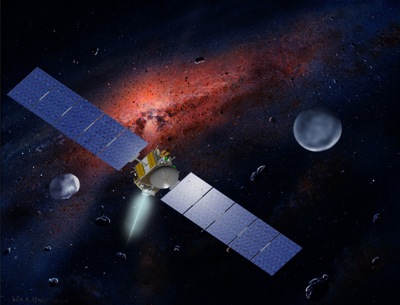 What are the big scientific questions astronomers have about Vesta and Ceres that Dawn might answer?

One of the questions is, which one was made first? And why is one dry, and why is the other wet? If you’re going to keep your water, if you’re a planet, you have to stay cool. The Earth has kept a lot of water, and it’s got a fairly cool surface. But Earth is much bigger, and it has a greater gravitational field. These bodies are small, and they’d have to be pretty cool inside – not like the Earth at all – in order to keep their water. So the first thing about Ceres is that it’s been pretty cool all its existence.

But then we take a look at Vesta, and it’s dry and it’s lost all its water. It was built out of the same material out there in the solar nebula. What happened to all the water? So astronomers have looked at the meteorites, and they found evidence in the meteorites that there was some radioactive material around when Vesta was formed.

And so they believed there was a supernova in the vicinity of the solar system, and that supernova seeded the material that was going to go into Vesta with the short-lived radioactive materials. And they give off heat. They gave off heat fairly rapidly. So if Vesta came together and made a little lump out there – a small protoplanet as we call it – then that heat from the radioactive material would be trapped inside and warm up the interior of Vesta.

But that didn’t seem to happen at Ceres. The simple explanation is, Ceres was born at a different time, that maybe it was born later, well after the supernova exploded. By that time, what we call short-lived radioactives, which would decay on the order of a half million years or so, that body came together when there wasn’t the radioactivity around. So there wasn’t this extra material in the interior of Ceres to heat it up. That might have allowed Ceres to keep its water. Meanwhile, Vesta lost it all.

Listen to the 8 minute EarthSky interview with Chris Russell on the Dawn spacecraft’s upcoming trip to Ceres and Vesta (at top of page).