Using the same technology Tesla is using to teach cars to drive themselves, European astronomers are using artificial intelligence to seek out and find many new gravitational lenses. 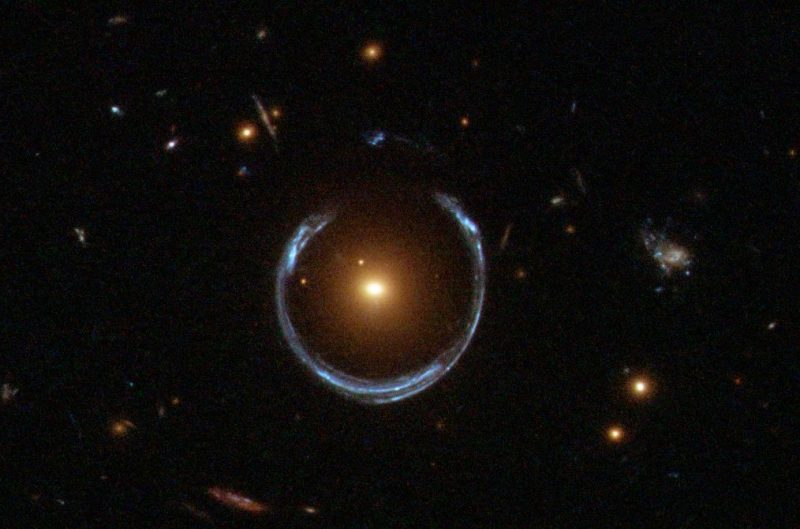 This is a special kind of gravitational lens, called an Einstein Ring. Here, the gravity of a luminous red galaxy has gravitationally distorted the light from a much more distant blue galaxy, creating a nearly complete ring. This 2011 image – of the Einstein Ring known as LRG 3-757, aka the Cosmic Horseshoe – is via the Hubble Space Telescope. The object was considered an “oddity” when it was first discovered in 2007. Now astronomers say they have used artificial intelligence to discover 56 new gravitational lenses, with the potential to find many more. Image via ESA/Hubble & NASA/APOD.

Astronomers from the universities of Groningen, Naples and Bonn are using artificial intelligence to search for rare gravitational lenses in enormous piles of astronomical observations of the universe. They say the method is based on:

… the same artificial intelligence algorithm that Google, Facebook and Tesla have been using in the last years.

The researchers published their method and 56 new gravitational lens candidates in the November, 2017 issue of the peer-reviewed journal Monthly Notices of the Royal Astronomical Society. They said they used what are called convolutional neural networks in their search for gravitational lenses. Their statement explained:

Google employed such neural networks to win a match of Go against the world champion. Facebook uses them to recognize what is in the images of your timeline. And Tesla has been developing self-driving cars thanks to neural networks.

Without the use of artificial intelligence, the hunt for gravitational lenses is difficult. Astronomers must sort thousands of images of the universe. That is one reason gravitational lenses are rare. These objects are a prediction of Einstein’s general relativity theory, which says that mass can bend light. Look back at the image at the top of this post. It looks like a ring around a galaxy, but it’s really a kind of illusion … a massive galaxy in front of a more distant galaxy. The light of the more distant one is bent by the intervening galaxy, to form the ring. This gravitational lensing effect can create multiple images of galaxies, or it can create apparent rings around galaxies, like the one above, called Einstein Rings. 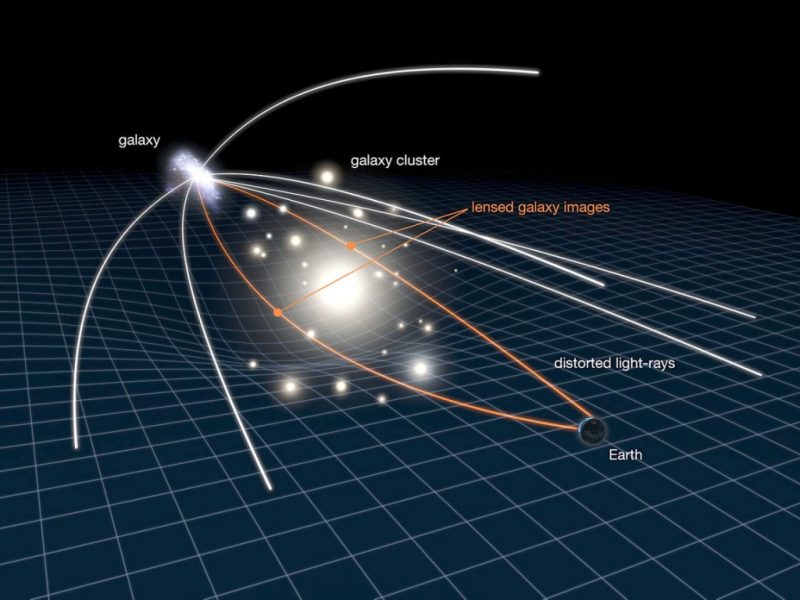 Gravitational lensing is an effect described by Einstein’s theory of general relativity; it happens because mass bends light. The gravitational field of a massive object will extend far into space, and cause light rays passing close to that object (and thus through its gravitational field) to be bent and refocused somewhere else. Image via Cfhtlens.org.

That is why these astronomers worked to train a neural network, using millions of homemade images of gravitational lenses. Then they confronted the network with millions of images from a small patch of the sky. That patch had a surface area of 255 square degrees. That’s just over half a percent of the sky. Their statement told what happened:

Initially, the neural network found 761 gravitational lens candidates. After a visual inspection by the astronomers the sample was downsized to 56. The 56 new lenses still need to be confirmed by telescopes as the Hubble Space Telescope. 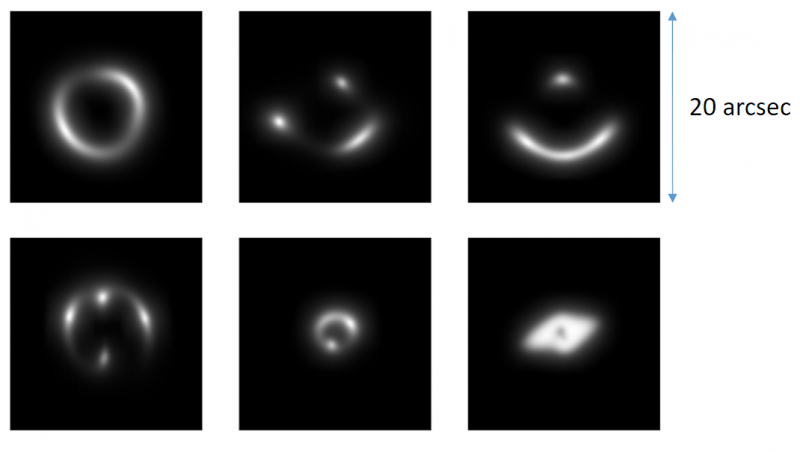 This picture shows a sample of the handmade photos of gravitational lenses that the astronomers used to train their neural network. Image via Enrico Petrillo/Rijksuniversiteit Groningen/Astronomie.nl.

Unfortunately, the researchers said, their neutral network did not see a third known lens. They said it was:

… a small lens and the neural network was not trained for that size yet.

In the future, the researchers said, they want to train their neural network to notice smaller lenses such as the one missed in the initial study and to reject false lenses. The final goal is to completely remove the need for any visual inspection.

Carlo Enrico Petrillo of the University of Groningen, The Netherlands is first author of the new work. He said:

This is the first time a convolutional neural network has been used to find peculiar objects in an astronomical survey. I think it will become the norm since future astronomical surveys will produce an enormous quantity of data which will be necessary to inspect. We don’t have enough astronomers to cope with this.