What caused the monster gamma-ray burst of April 2013?

A monster gamma-ray burst – whose afterglow lasted months – may have come from the explosion of a giant star, say astronomers at the University of Copenhagen.

When a star explodes as a supernova, there might be a violent burst of gamma radiation. Astronomers observe these very short bursts, which are called gamma-ray bursts. Gamma-ray bursts are extremely bright. They can be seen across the entire universe. Gamma-ray bursts are common occurrences. But in April 2013, astronomers spotted something unusual. In a press release issued today (November 21, 2013), astrophysicist Daniele Malesani, Dark Cosmology Centre at the Niels Bohr Institute at the University of Copenhagen, explained: 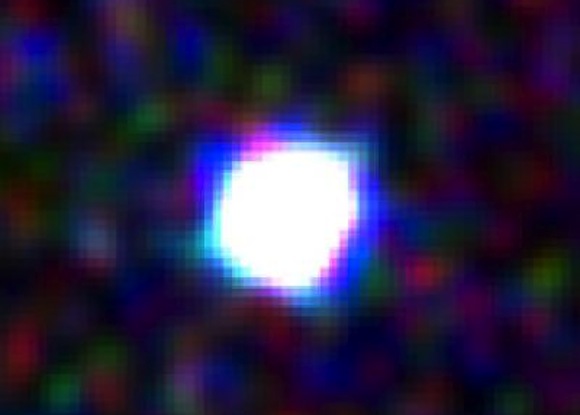 This is a close-up of the April 2013 gamma-ray burst, taken by the ultraviolet/optical telescope on the Swift satellite. Image via Swift 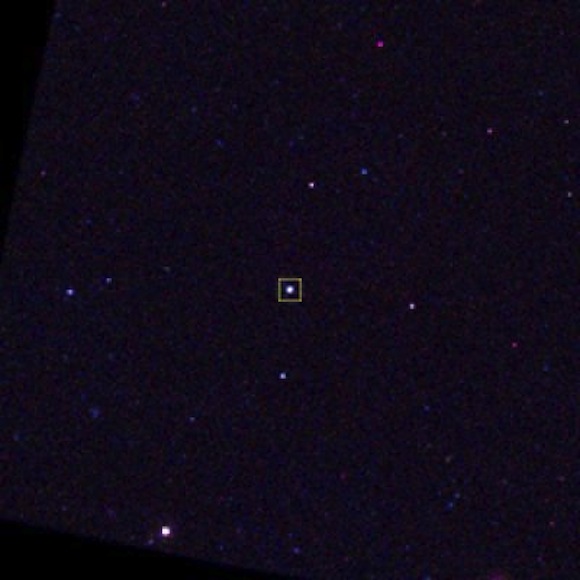 The April 2013 gamma-ray burst was extremely bright and is the most luminous object in the field, as seen in the image from the Swift satellite. All the other luminous objects seen in the image are stars from our own galaxy, while the gamma-ray burst is millions of times farther away. This section shows an area of the sky that roughly corresponds to a quarter the size of the full moon. Image via Swift

Gamma-ray bursts cannot be seen using earthly telescopes, because the Earth’s atmosphere absorbs the gamma radiation. So in order to see gamma-ray bursts, astronomers use telescopes in space. The Swift satellite, which was launched in 2004, monitors space and discovers about 100 gamma-ray bursts each year.

Malesani explained that the most intense radiation from gamma-ray bursts, typically, is over in under a minute. Afterwards, he said:

We follow the so-called afterglow, which usually lasts a few days or for several weeks, from both Swift and from the ground-based telescopes.

But the April 2013 gamma-ray burst – called GRB 130427A – was so powerful that astronomers the afterglow for several months. Malesani said:

What we have discovered is that it is a giant star with a mass that is 20-30 times the mass of the sun, and rapidly rotating.

But its size is only 3-4 times that of the sun, so it is extremely compact. These kinds of stars are called Wolf-Rayet stars.

Malesani’s team has also been able to localize the star in a galaxy in the relatively near universe. The gamma-ray burst exploded when the universe was 9.9 billion years old and it has taken the light 3.75 billion years to reach us on Earth in our galaxy, the Milky Way.

Bottom line: The April 2013 gamma-ray burst was the most powerful ever observed. Astronomers at the Dark Cosmology Centre at the Niels Bohr Institute at the University of Copenhagen believe it originated in the supernova explosion of a Wolf-Rayet star, a giant star that has up to 30 times the sun’s mass and is rapidly rotating.