Elephants know what it means to point, no training needed

Elephants understand humans in a way most other animals don’t, according to the latest research from the University of St Andrews.

The new study, published today (Thursday 10 October 2013) by Current Biology, found that elephants are the only wild animals to understand human pointing without any training to do so.

The researchers, Anna Smet and Professor Richard Byrne from the University’s School of Psychology and Neuroscience, set out to test whether African elephants could learn to follow pointing – and were surprised to find them responding successfully from the first trial.

They said, “In our study we found that African elephants spontaneously understand human pointing, without any training to do so. This has shown that the ability to understand pointing is not uniquely human but has also evolved in a lineage of animal very remote from the primates.” 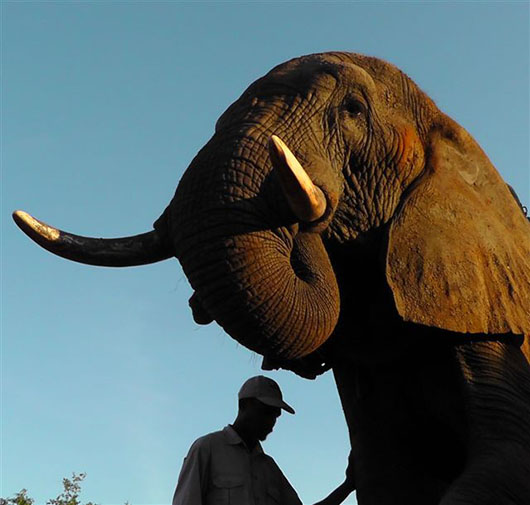 Elephants are part of an ancient African radiation of animals, including the hyrax, golden mole, aardvark and manatee. Elephants share with humans an elaborate and complex living network in which support, empathy and help for others are critical for survival. The researchers say that it may be only in such a society that the ability to follow pointing has adaptive value.

Professor Byrne explained, “When people want to direct the attention of others, they will naturally do so by pointing, starting from a very young age. Pointing is the most immediate and direct way that humans have for controlling others’ attention.

“Most other animals do not point, nor do they understand pointing when others do it. Even our closest relatives, the great apes, typically fail to understand pointing when it’s done for them by human carers; in contrast, the domestic dog, adapted to working with humans over many thousands of years and sometimes selectively bred to follow pointing, is able to follow human pointing – a skill the dogs probably learn from repeated, one-to-one interactions with their owners.”

The St Andrews’ researchers worked with a group of elephants who give rides to tourists in Zimbabwe. The animals were trained to follow certain vocal commands, but they weren’t accustomed to pointing.

Anna Smet explained, “We always hoped that our elephant subjects – whose ‘day job’ is taking tourists for elephant-back rides near Victoria Falls – would be able to learn to follow human pointing.

“But what really surprised us is that they did not apparently need to learn anything. Their understanding was as good on the first trial as the last, and we could find no sign of learning over the experiment.”

The researchers say that it is possible that elephants may do something akin to pointing as a means of communicating with each other, using their long trunk.

Anna continued, “Elephants do regularly make prominent trunk gestures, for instance when one individual detects the scent of a dangerous predator, but it remains to be seen whether those motions act in elephant society as ‘points.’”

The findings help explain how humans have been able to rely on wild-caught elephants as work animals, for logging, transport, or war, for thousands of years.

Professor Byrne explained, “It has long been a puzzle that one animal, the elephant, doesn’t seem to need domestication in order to learn to work effectively with humans. They have a natural capacity to interact with humans even though – unlike horses, dogs and camels – they have never been bred or domesticated for that role. Our findings suggest that elephants seem to understand us humans in a way most other animals don’t.”

Via University of St. Andrews