This month, scientists published their discovery of 73,000-year-old cross-hatchings found in a South African cave. It’s now the earliest known drawing and evidence of early humans’ ability to store information outside the human brain. 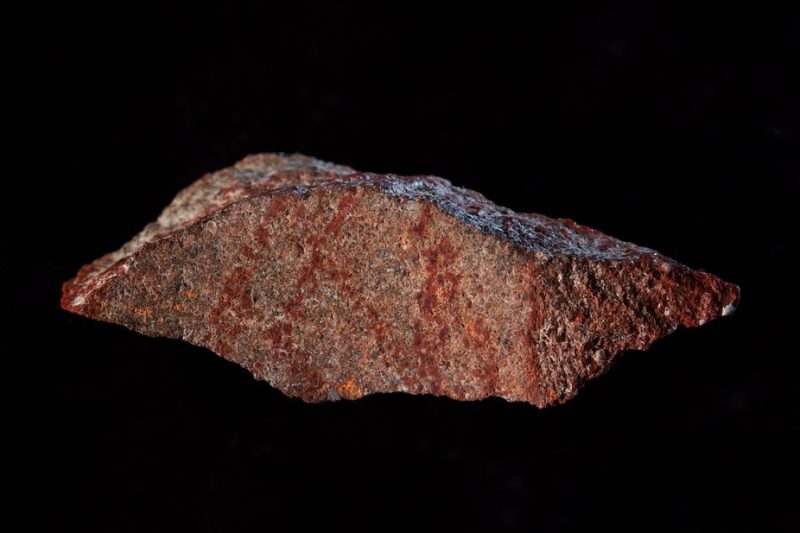 The drawing found on silcrete stone in Blombos Cave. Image via Craig Foster.

Scientists working in Blombos Cave in South Africa’s southern Cape region have made a discovery that changes our understanding of when our human ancestors started expressing themselves through drawings. They’ve found a 73,000-year-old cross-hatched drawing on a silcrete (stone) flake. It was made with an ochre crayon. The Conversation Africa asked Professor Christopher Henshilwood, who leads the team that made the discovery, about its significance.

What does the drawing your team found look like?

It consists of a set of six straight sub-parallel lines crossed obliquely by three slightly curved lines. One line partially overlaps the edge of a flake scar. This suggests it was made after that flake became detached. The abrupt termination of all lines on the fragment edges indicates that the pattern originally extended over a larger surface.

So the pattern was probably more complex and structured in its entirety than in this truncated form.

This has shifted our thinking about when human ancestors started drawing. What was the earliest known drawing found before this?

The earliest known engraving, a zig-zag pattern incised on a freshwater shell from Trinil, Java, was found in layers dated to 540,000 years ago. In terms of drawings, a recent article proposed that painted representations in three caves of the Iberian Peninsula were 64,000 years old – this would mean they were produced by Neanderthals. So the drawing on the Blombos silcrete flake is the oldest drawing by Homo sapiens ever found.

You describe it as a “drawing” – how can you be sure it wasn’t just a random series of scratches?

The presence of similar cross-hatched patterns engraved on ochre fragments found in the same archaeological level and older levels suggests the pattern in question was reproduced with different techniques on different media.

This is what we would expect to find in a society with a symbolic system embedded in different categories of artifacts. It’s also worth noting that patterns drawn on a stone are less durable than those engraved on an ochre fragment and may not survive transport. This may indicate that comparable signs were produced in different contexts, possibly for different purposes.

Is there any reason to think the pattern is an artwork?

We would be hesitant to call it “art”. It is definitely an abstract design; it almost certainly had some meaning to the maker and probably formed a part of the common symbolic system understood by other people in this group. It’s also evidence of early humans’ ability to store information outside of the human brain.

Does it tell us anything else about the people who made it? And do we know which group they belonged to on our ancestral tree?

The drawing was made by Homo sapiens – people like us, who were our ancient direct ancestors. They were hunter-gatherers who lived in groups of between 20 and 40 people.

The discovery adds to our existing understanding of Homo sapiens in Africa. They were behaviorally modern: they behaved essentially like us. They were able to produce and use symbolic material culture to mediate their behavior, just like we do now. They also had syntactic language – essential for conveying symbolic meaning within and across groups of hunter-gatherers who were present in southern Africa at that time. 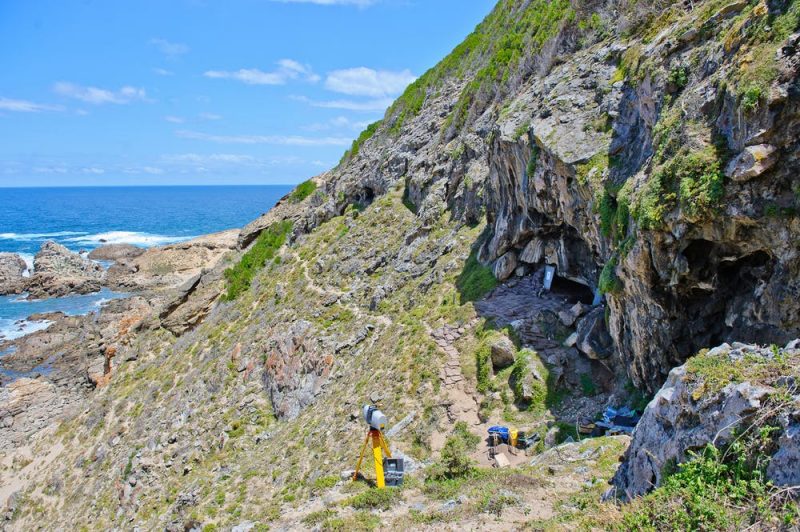 The outside of Blombos Cave, where the drawing was discovered. Image via Magnus Haaland.

Blombos Cave is a really significant archaeological site. Can you explain why?

Blombos Cave is situated 50 meters (164 feet) from the Indian Ocean, elevated at 35 meters (115 feet) above sea level and 300 km (186 miles) east of Cape Town. It’s very small – just 55m². It was used as a temporary living site by hunter-gatherer groups; they’d spend a week or two there at a time before moving on.

The archaeological layer in which the Blombos drawing was discovered has also yielded other indicators of symbolic thinking. These include shell beads covered with ochre and, more importantly, pieces of ochre engraved with abstract patterns. Some of these engravings closely resemble the one drawn on the silcrete flake.

In older layers at Blombos Cave, dated at 100,000 years, they also discovered a complete toolkit consisting of two abalone shells filled with an ochre-rich substance – a red paint – and all the artifacts associated with making it including seal bone used to add fat to the mixture. This discovery proves that our early ancestors could also make paint by 100,000 years ago.

Engraved ochre slabs with various designs, including cross-hatched patterns, were also found in these older layers.

Bottom line: Interview with the leader of the team that discovered 73,000-year-old cross-hatchings, the earliest-known drawings by humans, in a South African cave.

Source: An abstract drawing from the 73,000-year-old levels at Blombos Cave, South Africa