E.O. Wilson on the future of biology

Harvard biologist Edward O. Wilson talked to EarthSky about advances we might see in biology in the 21st century.

Renowned Harvard biologist Edward O. Wilson, one of the world’s best-known scientists and science communicators, talked to EarthSky about where science is going. Wilson said he believes the 21st century will see profound advances in biology. He said:

It’s very difficult to predict where science and technology are going, even over a short time-span, for the obvious reason that the greatest advances are often the least expected. And science follows them.

And within science, this is going to be a century of biology. We are entering an age of synthesis. So many discoveries have been made in biology in the cell, at the molecular level, and on up to the development of organisms. Increasingly now, these discoveries are beginning to throw light upon ecosystems and the processes of evolution beyond what we had.

I think we’re on the edge, really, of mastering disease, particularly genetic disease. We will have genetic engineering in time that will allow the correcting of molecular structure to eliminate genetic disease that’s crippled such a large percentage of the human population today. We’ll be able to treat some diseases, probably cystic fibrosis will be among the first. Hemophilia may follow.

Biology, said Wilson, will also be crucial for feeding a world of seven billion people today, and possibly 10 billion by mid-century.

And we need all the biology and all the advances we can find in agriculture, especially. We’re going to have to switch worldwide to dry land agriculture. We don’t have enough water in enough countries to feed all those people and to restore soil to arable condition. So this means that we have to have genetically modified organisms. I’d take that as a given. Some people don’t like the idea. But that’s one of those necessities brought about by the human condition.

Human health is going to improve enormously, Wilson believes, and human longevity, as poverty around the world is reduced, is going to increase. By how much is unknown, because we don’t have the biology yet to understand what longevity depends upon, all the many factors of it. Wilson also said that one of the major contributions that biology is going to make is to a deeper understanding of the human condition. He said:

We will approach an answer to the great questions of philosophy and religion never before answered. But now, within our grasp, I think, which are – where did we come from, Homo sapiens? What are we? And where are we going? 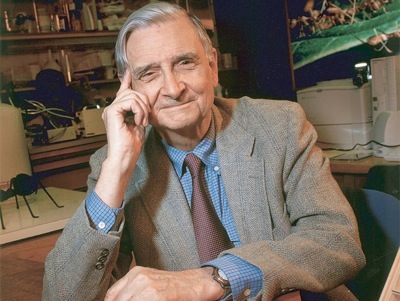 The first two questions, where we came from and what we are, are within our grasp; not so with “where we’re going.” That’s for future generations to decide. But it’s up to this generation, and the ones immediately to come, to decide where not to go, and what mistakes not to make to forfeit the future.

To hear more from E.O. Wilson on the future of biology, listen to the 8-minute EarthSky interview (at top of page).