Why sea level is rising faster than predicted

Climate feedbacks not included in global climate models may explain why sea level is rising faster than 2007 IPCC predictions.

The 2007 IPCC report projected a global sea level rise between 0.2 and 0.5 meters by the year 2100. But current measurements of sea level rise suggest Earth’s seas are rising at the maximum rate proposed by the IPCC – or faster. These measurements suggest a rise of one meter or more by the end of the century. That’s according to University of Colorado geologist Bill Hay, who presented his results on November 4, 2012 at a meeting of The Geological Society of America. Hay said:

Modern climate models … do not include the many feedbacks we are just discovering. 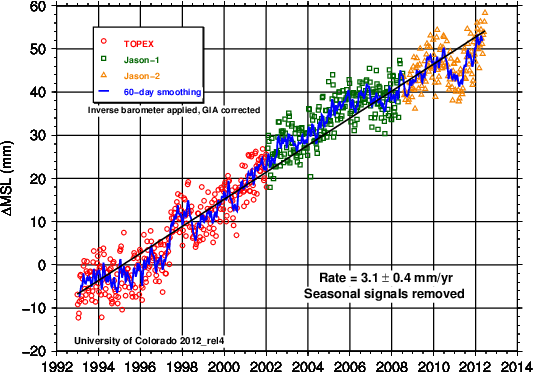 University of Colorado scientists released this chart of sea level rise earlier in 2012. It is based on data collected since 1993 via satellite radar altimeters, with the measurements continuously calibrated against a network of tide gauges. When seasonal and other variations are subtracted, the data indicate the rate of global sea level rise depicted here. Read more about this data here.

Arctic sea ice feedbacks. Arctic sea ice – which is already in the ocean – does not in itself raise sea level. But this melting plays a role in the overall warming of the Arctic, which leads to ice losses in nearby Greenland and northern Canada. In other words, when sea ice melts, it releases fresh water from the Arctic, which is then replaced by saltier, warmer water from the south. That warmer water pushes the Arctic toward more ice-free waters, which absorb sunlight rather than reflect it back into space like sea ice does. The more open water there is, the more heat is trapped in the Arctic waters, and the warmer things can get. So, according to Hay, melting Arctic sea ice is “a big heat pump that brings heat to the Arctic.” That feedback is not typically in climate models predicting sea level rise.

Greenland ice cap melting fast. Hay said the melting of glaciers is occurring rapidly, especially at high northerly latitudes, and is currently the largest contributor to sea level change. He said that, during the last interglacial period – without any help from humans – sea level rose 10 meters due to the melting of the large quantities of ice stored in the Greenland and Antarctic ice caps. New data suggest that the sea-level rise in the oceans took place over a few centuries, according to Hay, not over thousands of years. In summer 2012, Greenland underwent a record-setting melt. The Greenland ice streams were observed to speed up, lubricated by meltwater at their base. Hay said:

You can lose most of the Greenland ice cap in a few hundred years, not thousands, just under natural conditions. There’s no telling how fast it can go with this spike of carbon dioxide we are adding to the atmosphere.

By the way, the situation in Antarctica is different. Antarctica is of course a continent surrounded by an ocean, rather than an ocean surrounded by land as in the Arctic, so the geology of the two poles are very different. On September 16, 2012, climate change skeptic and blogger Steven Goddard stated in a widely discussed blog that Antarctic sea ice reached its highest level ever recorded earlier that month. He suggested that the expansion of Antarctic sea ice was somehow balancing the sea ice melt in the Arctic (conclusion by climate skeptics: no overall global warming). But actual scientists point out that projections made from climate models all predict that global warming should impact Arctic sea ice first and most intensely, that the lose of Arctic sea ice over past decades is vastly greater than the momentary gain in Antarctic ice, and that climate models suggest rising global temperatures will overwhelm the other influences and cause Antarctic sea ice to scale back, too, in the coming decades. Read more about that story here. 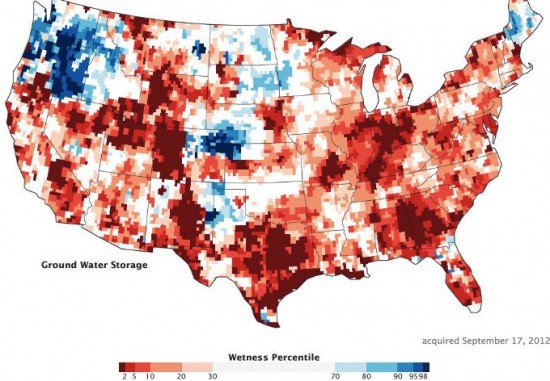 Groundwater fluctuates in wetness, just as Earth’s surface does. This map shows groundwater in aquifers in September 2012. The wetness, or water content, is compared to the average for mid-September between 1948 and 2009. The darkest red regions represent dry conditions underground. Read more about groundwater, and see more maps, here. Maps by Chris Poulsen, National Drought Mitigation Center, based on data from Matt Rodell, NASA Goddard Space Flight Center, and the GRACE satellite science team. Via NASA Earth Observatory

Groundwater mining also contributes to ocean rise. Groundwater is being mined all over the world to mitigate droughts. That water is ultimately being added to the oceans. A recent visualization of this effect in the U.S. was posted by NASA’s Earth Observatory.

All of the effects mentioned in this post are positive feedbacks; that is, they speed up sea-level rise. These effects aren’t generally taken into account by global climate models, according to Hay, which is why sea level is rising at the maximum rate of, or faster than, the 2007 IPCC predictions. Hay added:

You would expect negative feedbacks to creep in at some point. But in climate change, every feedback seems to go positive.

He said the reason may be that Earth’s climate seems to have certain stable states. Between those states, things are unstable and can change quickly. We appear to be in a less stable state now. 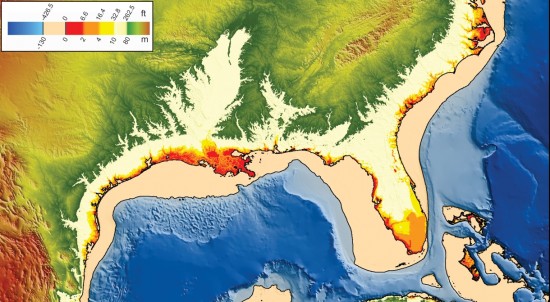 This map shows extremes in past and possible future changes in sea level. A rise of one meter by the end of this century won’t be nearly this extreme. Still … it’s sobering. The map comes from Emanuel Soeding at Christian-Albrechts University, using US National Oceanic & Atmospheric Administration Etopo2v1 elevation data. Click here to expand map.

Bottom line: Measurements of sea level rise indicate that global sea level is rising at the maximum rate, or faster, than IPCC predictions from 2007. University of Colorado geologist Bill Hay points out that climate models do not take certain feedbacks into account, including those from Arctic sea ice and Greenland ice cap melting, and from groundwater mining. Hay also mentioned that sea level rise won’t be uniform around the world (there will be regional variations).

Read the abstract of Dr. Hay presentation to the Geological Society of America