Three Landsat images show the expansion of massive salt evaporation projects in and around the Dead Sea, over the span of 39 years. 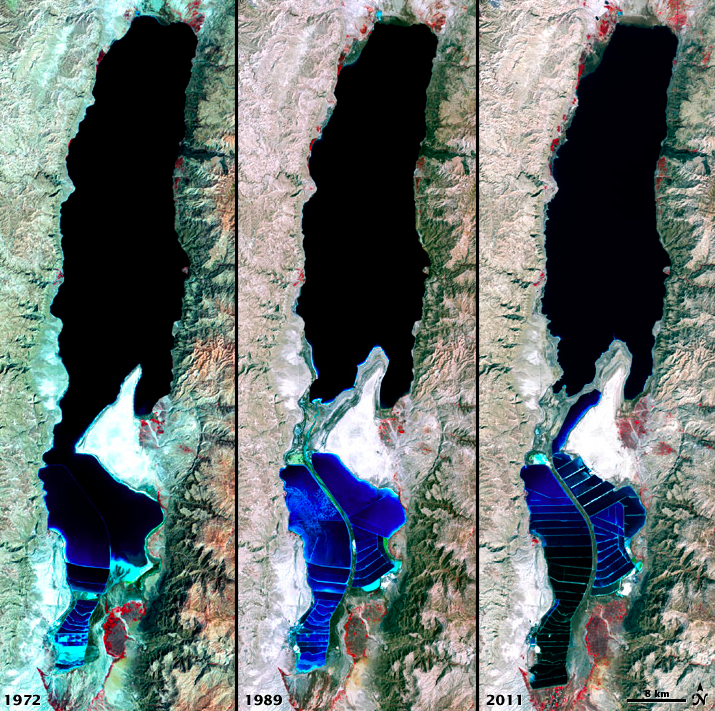 In these images, deep waters are blue or dark blue, while brighter blues indicate shallow waters or salt ponds (in the south). The pale pink and sand-colored regions are barren desert landscapes, while green indicates sparsely vegetated lands. Denser vegetation appears bright red. Near the center is the Lisan Peninsula, which forms a land bridge through the Dead Sea. According to NASA:

The ancient Egyptians used salts from the Dead Sea for mummification, fertilizers, and potash (a potassium-based salt). In the modern age, sodium chloride and potassium salts culled from the sea are used for water conditioning, road de-icing, and the manufacturing of polyvinyl chloride (PVC) plastics. The expansion of massive salt evaporation projects are clearly visible over the span of 39 years.

The Dead Sea lies in a depression in Earth’s crust, where the continents of Africa and Asia are pulling away from each other. It sits roughly 1,300 feet (400 meters) below sea level. It got its name because it has a very high salt content that discourages the growth of fish, plants and creatures that would normally inhabit a salty sea.

Because of its high salt content, you float high in the water in the Dead Sea. Image Credit: Kai Hendry on Flickr

The Dead Sea, looking across to Jordan. Image by David Shankbone via Wikimedia Commons.