The Yellowstone supervolcano’s last eruption wasn’t a single event, but 2 closely-spaced eruptions that put the brakes on a natural global-warming trend, says a study. 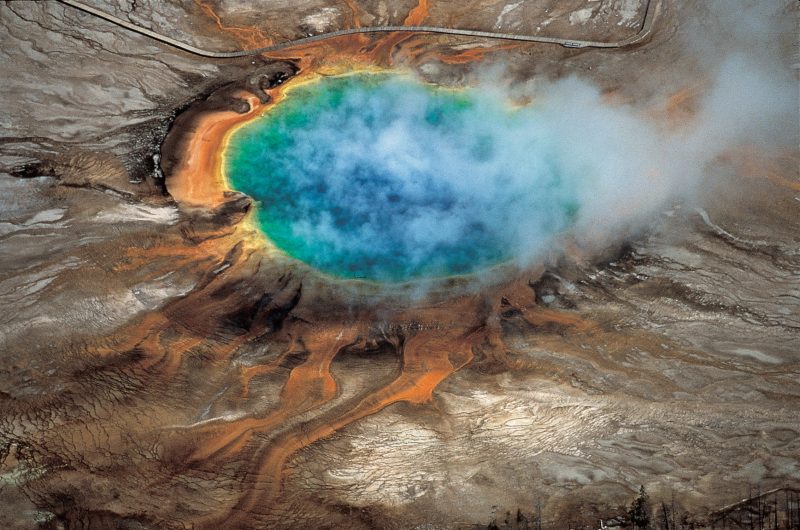 The gorgeous colors of Yellowstone National Park’s Grand Prismatic hot spring are among the park’s myriad hydrothermal features created by the fact that Yellowstone is a supervolcano – the largest type of volcano on Earth. Photo via Windows into the Earth by Robert B. Smith and Lee J. Siegel

The Yellowstone supervolcano’s last catastrophic eruption, about 630,000 years ago, was not a single event, but two powerful and closely-spaced eruptions, according to a new study. The super-eruptions were powerful enough, the researchers say, to slow a natural global warming trend that eventually led the planet out of a major ice age.

For the study, presented at the Geological Society of American’s annual meeting in Seattle on October 25, 2017, a team of geologists from the University of California Santa Barbara (UCSB) analyzed two layers of volcanic ash discovered in seafloor sediments off the coast of Southern California. These layers of ash, sandwiched among sediments, bear the unique chemical fingerprint of Yellowstone’s most recent super eruption. and contain a remarkably detailed climate record of the violent events that formed the vast Yellowstone caldera – or cauldron-like crater – that we see today.
UCSB geologist Jim Kennett said in a statement:

We discovered here that there are two ash-forming super eruptions 170 years apart, and each cooled the ocean by about three degrees Celsius.

By comparing the volcanic ash record with the climate record of single-celled marine animal fossils, it’s quite clear, Kennet said, that both of these eruptions caused separate volcanic winters, when ash and volcanic sulfur dioxide emissions reduce the amount of sunlight reaching Earth’s surface and cause temporary cooling. According to the study, the onset of the global cooling events was abrupt and coincided precisely with the timing of the supervolcanic eruptions.

These cooling events occurred at an especially sensitive time, Kennet said, when the global climate was warming out of an ice age and easily disrupted by such events. But, Kennet added, each time, the cooling lasted longer than it should have, according to simple climate models. He said:

We see planetary cooling of sufficient magnitude and duration that there had to be other feedbacks involved.

These feedbacks might include increased sunlight-reflecting sea ice and snow cover or a change in ocean circulation that would cool the planet for a longer time.

Read more from the Geological Society of America