The America’s Climate Choices report calls out a pressing need for immediate action to limit the magnitude of climate change and prepare to adapt to its impacts.

Warning that the risk of impact from climate change is growing with every ton of greenhouse gases emitted into the atmosphere, a U.S. National Research Council (NRC) committee today reiterated in a new report the pressing need for substantial and immediate action to limit the magnitude of climate change and prepare to adapt to its impacts.

The nation’s options for responding to the risks are analyzed in a May 12, 2011 report (pdf) and the final volume in America’s Climate Choices, a series of studies requested by Congress in 2008. 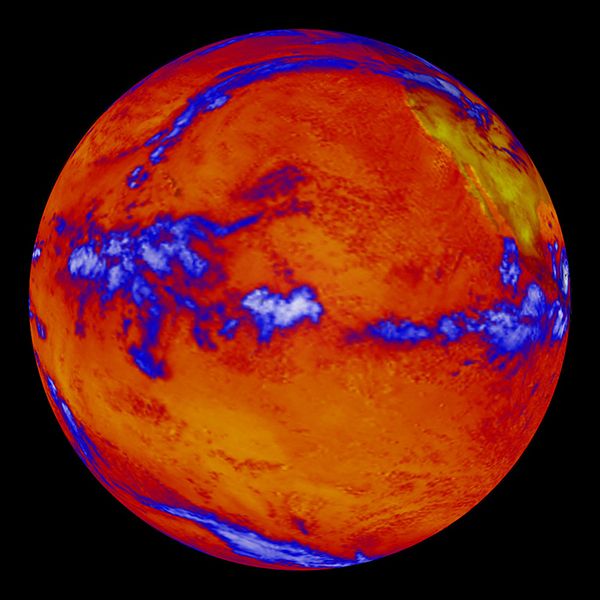 This false color image of the Earth was produced by the Clouds and the Earth’s Radiant Energy System (CERES) instrument flying aboard NASA’s Terra spacecraft. The image shows where more or less heat, in the form of long-wave radiation, is emanating from the top of the Earth’s atmosphere. Image Credit: NASA/Goddard

The committee included not only renowned scientists and engineers but also economists, business leaders, an ex-governor, a former congressman, and other policy experts including EarthSky chairman Peter Zandan. Committee chair Albert Carnesale, chancellor emeritus and professor at University of California, Los Angeles, said:

The goal of the America’s Climate Choices studies is to ensure that climate decisions are informed by the best possible scientific knowledge, analysis, and advice, both now and in the future.

The new report reaffirms the preponderance of scientific evidence pointing to human activities – especially the release of carbon dioxide and other greenhouse gases into the atmosphere – as the most likely cause for most of the global warming that has occurred over the last several decades. This trend cannot be explained by natural factors such as internal climate variability or changes in incoming energy from the sun, the report says. It adds that the impacts of climate change on human and natural systems can generally be expected to intensify with warming.

While it recognized that climate change is inherently a global issue requiring an international response, the committee focused on the charge from Congress to identify steps and strategies that U.S. decision makers could adopt now. A coordinated national response to climate change, which the country currently lacks, is needed and should be guided by an iterative risk management framework in which actions taken can be revised as new knowledge is gained.

America’s response to climate change is ultimately about making choices in the face of risk. Risk management strategies must be durable enough to promote sustained progress, yet sufficiently flexible to take advantage of new knowledge and technologies.

Substantial reductions of greenhouse gas emissions should be among the highest priorities in the national response, the committee said. Although the exact magnitude and speed of reductions will depend on how much risk society deems acceptable, it would be imprudent to delay taking action. The committee cited many reasons for not waiting, among them that the faster emissions are reduced, the lower the risks. And because the effects of greenhouse gases can take decades to manifest and then persist for hundreds or even thousands of years, waiting for impacts to occur before taking action will likely be too late for meaningful mitigation. Beginning emissions reductions soon will also lower the pressure to make steeper and costlier cuts later.

It is our judgment that the most effective strategy is to begin ramping down emissions as soon as possible.

State and local efforts currently under way are potentially significant but unlikely to yield outcomes comparable to what could be achieved with a strong federal effort, according to the committee. It said that the most efficient way to accelerate emissions reductions is through a nationally uniform price on greenhouse gas emissions with a price trajectory sufficient to spur investments in energy efficiency and low-carbon technologies. Having such policies in place is crucial to guide investments in energy infrastructure that will largely determine the direction of greenhouse gas emissions for decades to come.

The committee deemed the risks of sticking to “business as usual” to be a much greater concern than the risks associated with a strong response. Most policy responses could be reversed if they prove to be more stringent than is needed, but adverse changes to the climate system are difficult or impossible to undo. It also said that uncertainty in projecting the severity, location, or time of climate change impacts is not a reason for inaction. On the contrary, uncertainty about future risks could be a compelling reason for taking action given that abrupt, unanticipated, or more severe impacts could occur.

Aggressive cuts in greenhouse gas emissions would reduce the need for adaptation but not eliminate it, the committee emphasized, urging the nation to mobilize now to reduce vulnerability to climate change impacts. While adaptation planning largely occurs at the state and local level, the federal government should help coordinate these efforts and develop a national adaptation strategy.

In addition, the federal government should maintain an integrated portfolio of research programs aimed at increasing understanding of the causes and consequences of climate change and developing tools to limit climate change and adapt to its impacts. The government also needs to take the lead in collecting and sharing climate change information to ensure that pertinent knowledge is used to inform decisions. Public and private sector engagement through broad-based deliberative processes is essential as well. These processes should include transparent analyses of climate change information, an explicit discussion of uncertainties, and consideration of how decisions will be affected by differing personal values.

Because emissions reductions in the U.S. alone will not be adequate to avert dangerous climate change risks, U.S. leadership needs to remain actively engaged in international climate change response efforts, the committee emphasized. If the U.S. pursues strong emission reduction efforts, it will be better positioned to influence other countries to do the same. Given that climate change effects elsewhere in the world may affect U.S. interests, it would also be prudent to help enhance the adaptive capacity of other nations, particularly developing countries.

The America’s Climate Choices studies were sponsored by NOAA. The National Academy of Sciences, National Academy of Engineering, Institute of Medicine, and National Research Council make up the National Academies. They are independent, nonprofit institutions that provide science, technology, and health policy advice under an 1863 congressional charter. Committee members, who serve pro bono as volunteers, are chosen by the Academies for each study based on their expertise and experience and must satisfy the Academies’ conflict-of-interest standards. The resulting consensus reports undergo external peer review before completion.

Summary: A U.S. National Research Council committee released a May 12, 2011 report titled America’s Climate Choices, urging substantial action to limit the magnitude of global warming and to prepare to adapt to its effects. The committee, chaired by Albert Carnesale and released under the auspices of the National Academies, included renowned scientists and engineers, economists, business leaders, an ex-governor, a former congressman, and other policy experts. The report had been previously requested by the U.S. Congress and was more than two years in the making.

Dennis L. Hartmann
Professor
Department of Atmospheric Sciences, and
Senior Fellow
Joint Institute for the Study of the Atmosphere and Ocean
University of Washington
Seattle, Washington

Via National Academy of Sciences

More about the National Academies (pdf)